Caffeine is well-known for its ability to help people stay alert, but a team of researchers at MIT and Brigham and Women’s Hospital has now come up with a novel use for this chemical stimulant — catalyzing the formation of polymer materials.

Using caffeine as a catalyst, the researchers have devised a way to create gummy, biocompatible gels that could be used for drug delivery and other medical applications.

“Most synthetic approaches for synthesizing and cross-linking polymeric gels and other materials use catalysts or conditions that can damage sensitive substances such as biologic drugs. In contrast, here we used green chemistry and common food ingredients,” says Robert Langer, the David H. Koch Institute Professor at MIT and one of the study’s senior authors. “We believe these new materials could be useful in creating new medical devices and drug delivery systems.”

“It’s really appealing for patient populations, especially children, who have difficulty with swallowing capsules and tablets,” says Giovanni Traverso, a research affiliate at MIT’s Koch Institute for Integrative Cancer Research and a gastroenterologist and biomedical engineer at Brigham and Women’s Hospital, who is also a senior author of the paper.

Former MIT postdoc Angela DiCiccio, who is now at Verily Life Sciences, the life sciences division of Google X, is the lead author of the paper.

Making polymer gels usually requires metal catalysts, which could be hazardous if any of the catalyst remains in the material after the gel is formed. The MIT team wanted to come up with a new way to make gels using catalysts and starting materials that are based on food products and other materials that are safe to ingest.

“Our goal was to try to simplify the method of manufacturing and impart an improved safety profile from the beginning by using potentially safer catalysts,” Traverso says.

Although caffeine has not been used for chemical synthesis before, it drew the researchers’ attention because it is plant-derived and can act as a weak base, meaning that it gently removes protons from other molecules. It also has a similar structure to some other organic weak bases that have been used to catalyze the type of chemical reaction needed to form these gels — the formation of ester bonds to create a polyester.

“Polyesters allow for the intentional design of ingestible materials made from bioderived resources,” DiCiccio says. “However, there didn’t exist any catalysts that were mild enough to enchain these molecules without causing unwanted reactions or requiring super high heat. Our new platform provides an elegant solution to this problem using inexpensive materials and broadly accessible chemistries.”

The researchers decided to use caffeine to induce citric acid, another edible material produced by plants, to form a polymer network along with polyethylene glycol (PEG), a biocompatible polymer that has been used in drugs and consumer products such as toothpaste for many decades.

When mixed with citric acid and PEG, and slightly heated, caffeine opens up an oxygen-containing ring in the PEG, allowing it to react with citric acid to form chains that consist of alternating molecules of PEG and citric acid. If drug molecules are present in the mixture, they also become incorporated into the chains.

The researchers showed that they could load two malaria drugs, artesunate and piperaquine, into these polymers. They could also vary the chemical and mechanical properties of the gel by altering its composition. They created gels that contain either PEG or another polymer called polypropylene glycol, as well as some that combine those two polymers in different ratios. This allows them to control properties such as the material’s strength, its surface structure, and the rate at which the drugs are released.

“Depending on what the application may be, or what drugs are being incorporated, you could mix and match to find an optimal mixture,” Traverso says.

The gels can also be imprinted with patterns such as the microscale architecture found on the surface of lotus leaves, which allows them to repel water. Altering the surface traits of the material could help researchers control how quickly or slowly the gels move through the digestive tract.

The resulting gels contain a small amount of caffeine, roughly the same as that found in a cup of tea. In preliminary safety tests, the researchers found no harmful effects in four types of human cells, or in rats.

The research was funded by the Bill and Melinda Gates Foundation, the National Institutes of Health, and the Alexander von Humboldt Foundation. Other MIT authors of the paper include Young-Ah Lucy Lee, Dean Glettig, Elizabeth Walton, Eva de La Serna, Veronica Montgomery, and Tyler Grant. 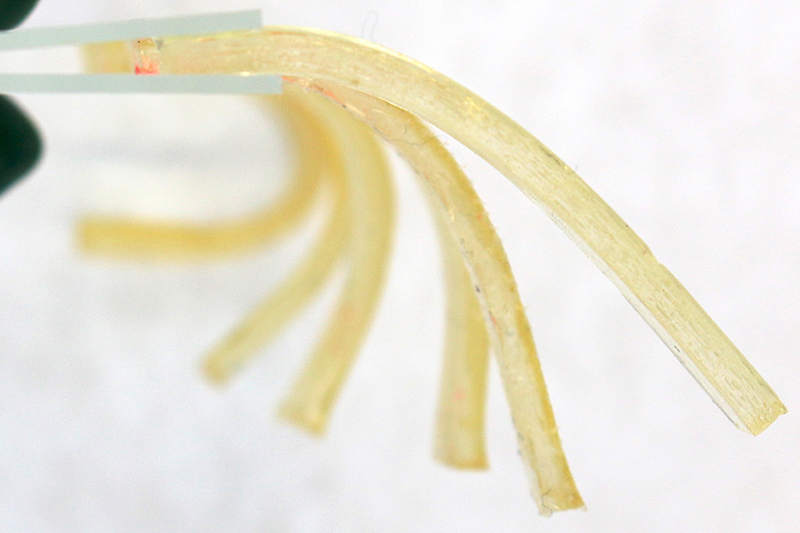 MIT and Brigham and Women’s Hospital researchers have devised a new way to create flexible polymer gels using caffeine as a catalyst. Courtesy of the researchers