When remote regions with limited health facilities experience an epidemic, they need portable diagnostic equipment that functions outside the hospital. As demand for such equipment grows, EPFL researchers have developed a low-cost and portable microfluidic diagnostic device. It has been tested on Ebola and can be used to detect many other diseases.

Over the past several years, microfluidic devices have shown extraordinary potential in the area of diagnostics. They are composed of silicone rubber with minuscule channels the width of a hair. Microfluidic devices, and can rapidly detect a number of different biomarkers in very small quantities of blood. 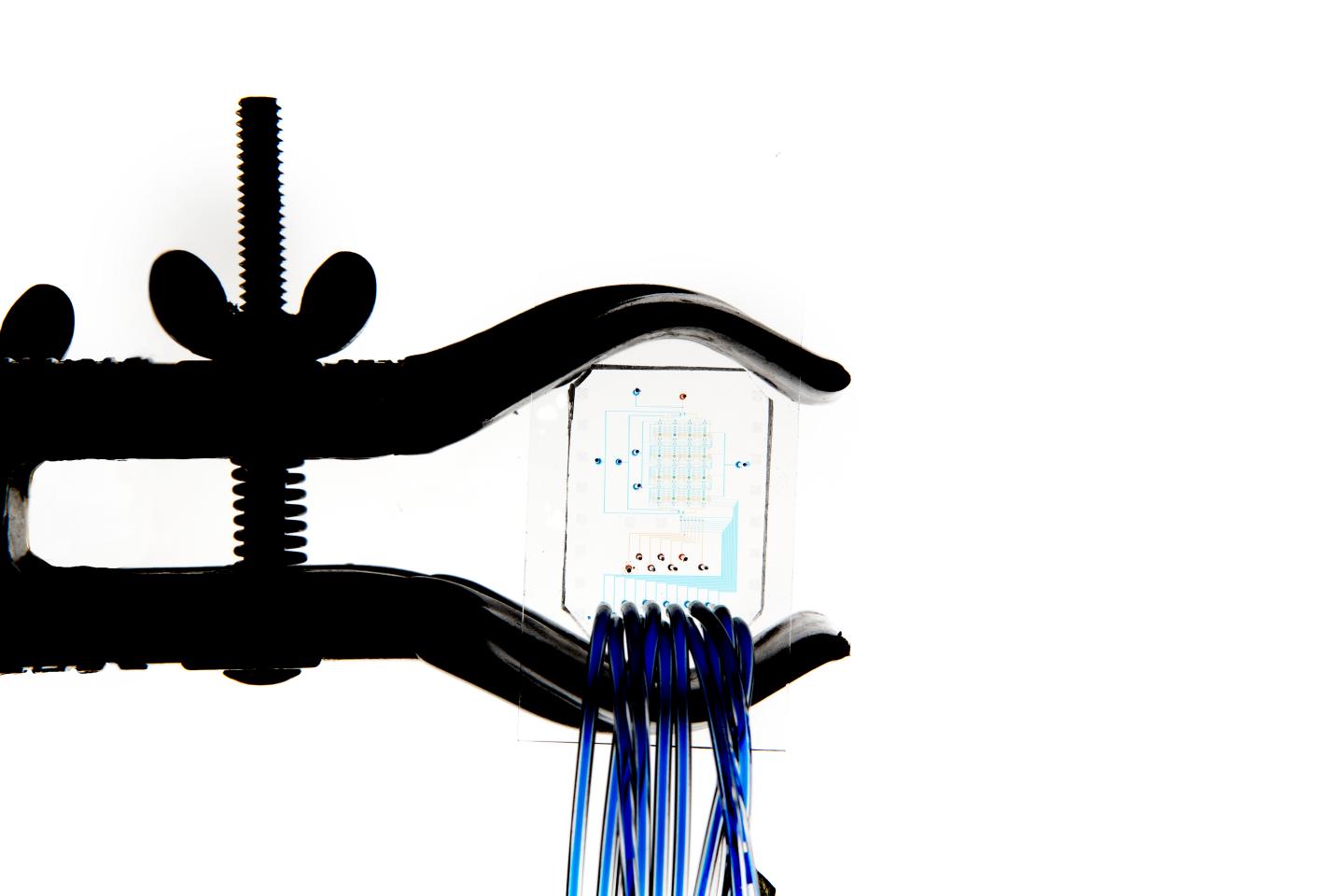 It is possible to load the blood sample directly onto the device and to perform on-chip biomarker quantitation without requiring any sample pre-treatment. (All images redit: Alban Kakulya)

At EPFL, a new type of microfluidic platform has come out of the Laboratory of Biological Network Characterization (LBNC), headed by Sebastian Maerkl. It is a portable device that runs on battery power and is completely self-sustained. It operates seamlessly with inexpensive microscopes and provides very high levels of accuracy and detection. The platform, which is described in a recent ACS Nano article, can quantify up to 16 different molecules – or biomarkers – in a tiny amount of blood (less than 0.005 milliliters). The biomarkers are usually enzymes, proteins, hormones or metabolites and the concentration of these molecules in the blood provides precise information on the patient’s health condition.

Two Detection Readouts in One Platform
The device is unique in that it is composed of both analog and digital detection mechanisms, while conventional devices hitherto only integrated one or the other. Digital detection is highly sensitive and can detect the presence of a single biomarker. However, it is less effective when the concentration of biomarkers is too high, due to signal saturation. Analog measurements, on the other hand, function best at higher biomarker concentrations. Using these two detection mechanisms simultaneously, the composition of a drop of blood can be thoroughly analyzed in a short amount of time. The analysis provides precious medical information: it could help doctors make an early diagnosis or determine the stage of a disease. 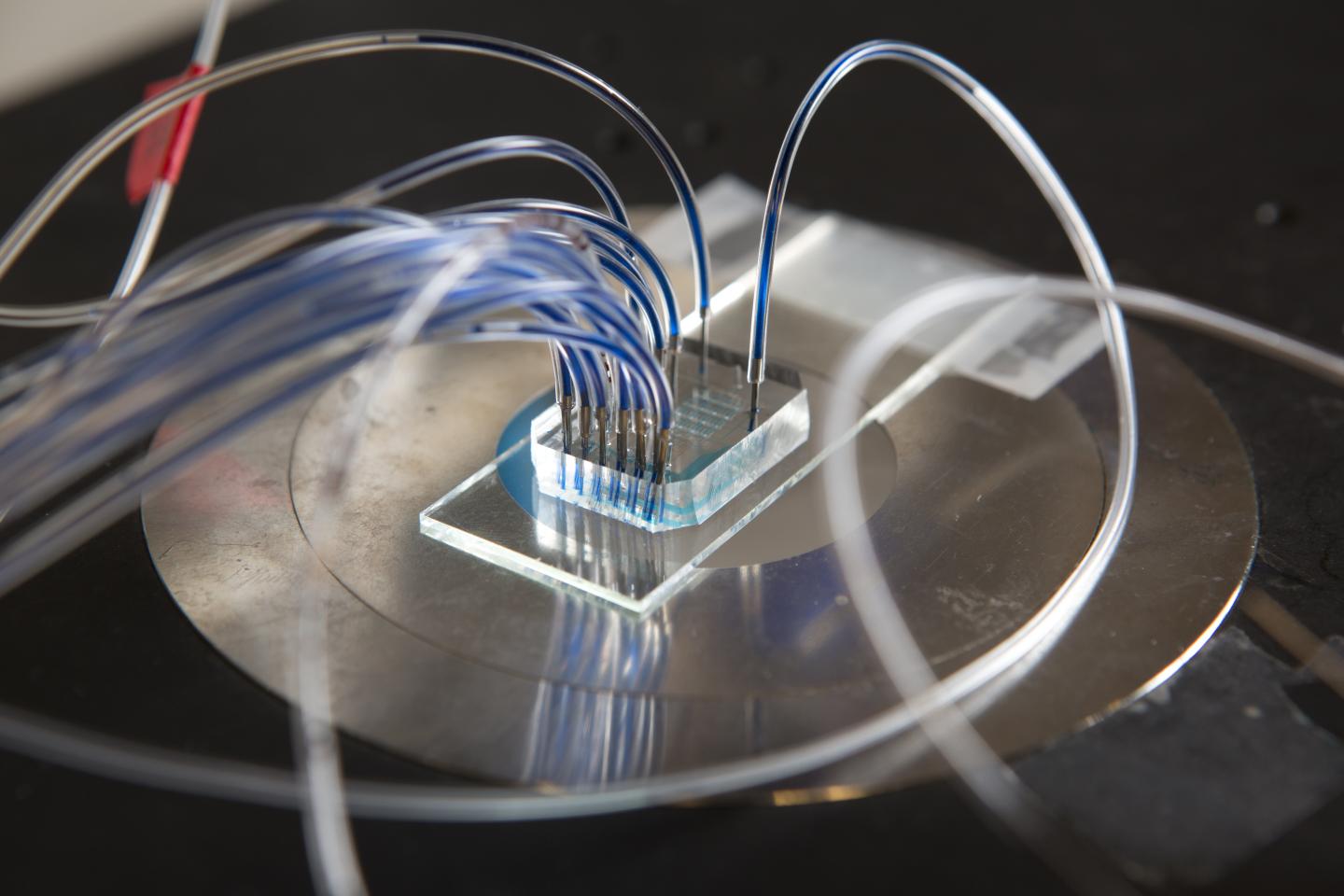 The device is unique in that it is composed of both analog and digital detection mechanisms, while conventional devices hitherto only integrated one or the other.

Initial testing has been successfully carried out on a sample containing anti-Ebola antibodies, which indicate the presence of the virus in both symptomatic and asymptomatic patients. The device could potentially work with a large number of other protein biomarkers and molecules.

No Need to Pre-Treat Blood Samples
There is more good news. Researchers at EPFL found that they could load the blood sample directly onto the device and perform on-chip biomarker quantitation without requiring any sample pre-treatment. “For researchers, it is quite interesting to be able to avoid having to separate the blood,” said Francesco Piraino, the article’s lead author. Blood plasma separation requires centrifuges, large volume samples and a long processing time. 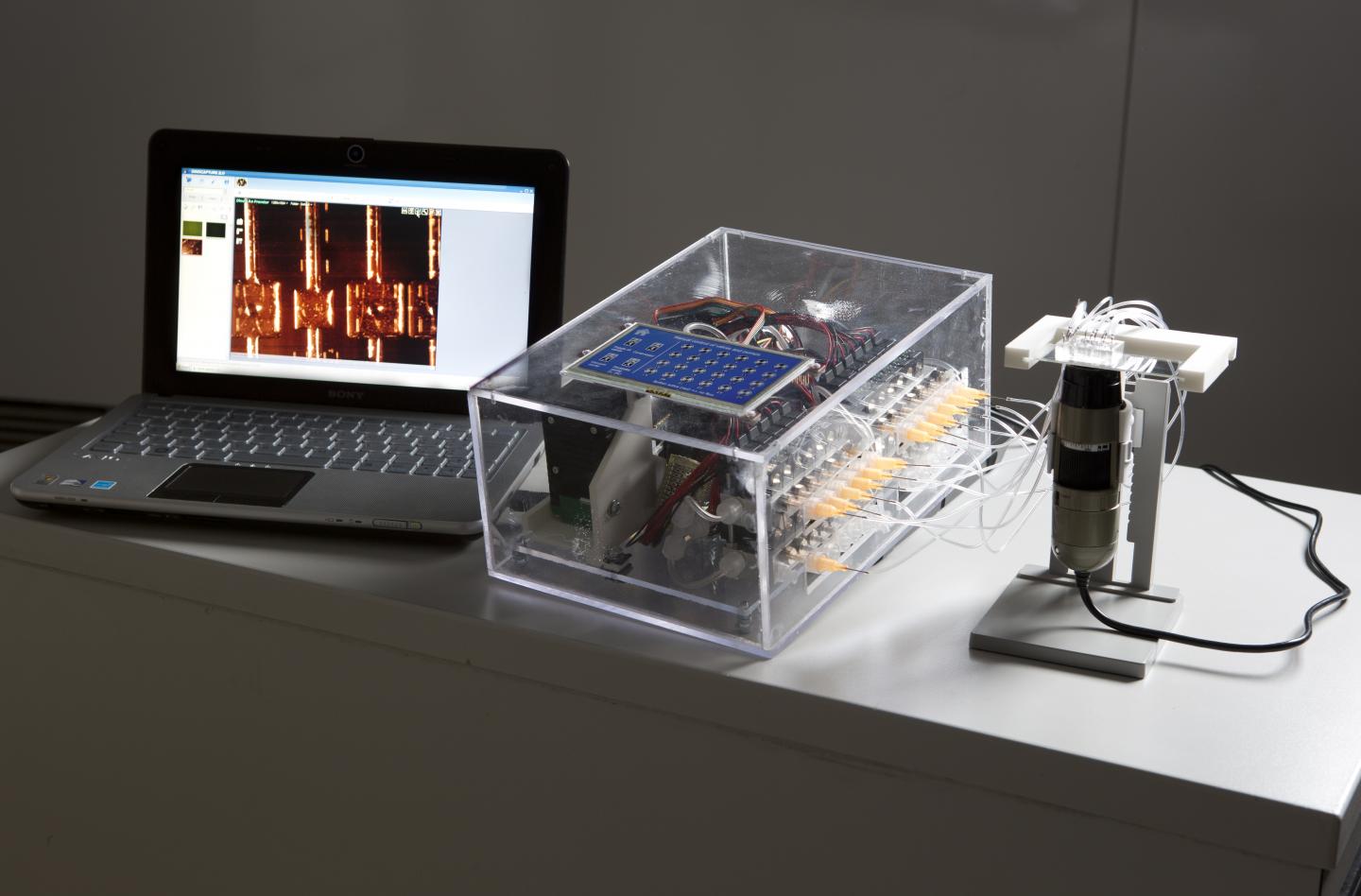 The microfluidic tool has been tested with Ebola. It requires no bulky equipment, and is thus ideally suited for use in remote regions.

For Diagnoses in Resource-Limited Regions
Says Piraino: “The platform will lead the development of new kinds of tests to meet the increasing demand for on-site diagnostic testing. It will prove very useful for medical staff working in resource-limited regions.” The device could, for example, be used to monitor endemic, epidemic, and pandemic disease outbreaks.