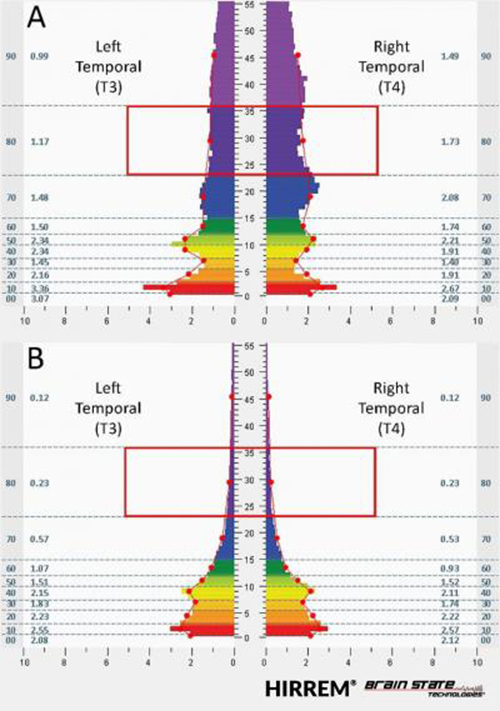 For an individual with posttraumatic stress symptoms, the figure shows brain electrical activity at the temporal lobes before (top panel) use of HIRREM (Brain State Technologies, Scottsdale Arizona), and afterward (bottom panel). Left and right sides of each panel show left and right temporal lobes, respectively, with the frequency spectrum along the vertical axis, and amplitudes along the horizontal axis. The initial state shows rightward asymmetry, especially in high frequencies. By the end of HIRREM, there is more symmetry, as well as a reduction of amplitudes across most of the frequency spectrum, for both lobes. (Credit: © Brain State Technologies)

For a series of individuals with post-traumatic stress symptoms, use of HIRREM;, an algorithm-guided neurotechnology, was associated with significant clinical improvements. Study findings were published April 19th online in BMC Psychiatry, by a team from Brain State Technologies (BST – Scottsdale, Arizona) and Wake Forest School of Medicine (Winston-Salem, North Carolina).

The paper describes HIRREM, a computer-based innovation developed by BST, as a closed-loop neurotechnology. The “closed loop” refers to cycles or “loops” of intervention that are guided by real-time brain activity, in contrast to “open-loop” approaches that do not monitor brain activity or “learner-in-the-loop” techniques that depend on learning skills. Use of HIRREM entailed noninvasive monitoring of dynamic brainwave patterns, algorithmic analysis of changing frequencies, and real-time production of unique and changing forms of acoustic stimulation back to the user.

The HIRREM process is designed to support auto-calibration of brain activity, shown in the study as increased symmetry between the left and right temporal lobes, in a high-frequency range. After their sessions, 89 percent of the subjects reported significant reductions in their symptoms of traumatic stress.

Lee Gerdes, founder and CEO of Brain State Technologies, states that “We are extremely pleased with these findings, given the tremendous burden of suffering associated with trauma. For many people, currently accepted treatments are not effective or adequate.”

Gerdes further describes the paper as a validation of the experience of people who have used the BST closed-loop approach for non-clinical purposes. “The results suggest why tens of thousands of people have used our core technology for wellness or performance optimization. Trauma is an unseen epidemic, and a relaxed brain can reset itself, even give a person their life back.”

Measures of cardiovascular regulation were available for 12 of the study participants, before and after their sessions. Those individuals showed significant improvements in heart rate variability (HRV) and baroreflex sensitivity, indicating a greater capacity to manage the fight-or-flight response. Dr. Sung Lee, Director of Research at Brain State Technologies, states that “the cardiovascular findings speak to the brain-heart connection, and they are consistent with results we have reported from use of HIRREM by individuals with other clinical conditions. Traumatic stress increases the risk for heart disease and other disorders, and a genuine advance in traumatic stress treatment should help both the mind and the body.”