Similar to the way that a conventional magnetic resonance imaging (MRI) machine uses large magnets to generate 3D images, physicists have developed a proposal for a quantum nano-MRI machine that would use the magnetic properties of a single atomic qubit to generate 3D images with angstrom-level (0.1-nanometer) resolution. The new technique could lead to the development of single-molecule microscopes for imaging biomolecules, with applications in drug discovery and better understanding diseases.

The researchers, led by Lloyd Hollenberg, a physics professor at the University of Melbourne, have published a paper on the new technique in a recent issue of Nature Communications.

“Continuous scientific advances over the last decades have enabled us to understand and therefore cure many medical issues at the macroscopic scale, for example bone fractures or blood clots,” lead author Viktor Perunicic at the University of Melbourne told Phys.org. “However, the diseases that humanity is facing today are microscopic, as they originate from malfunctions on the molecular level, for example a protein of a deformed shape somewhere in a cell. Cancer, diabetes, viral infections and many others have this in common, yet at present there is almost no means to see what is happening inside our bodies at this level.

The proposed nano-MRI setup consists of an atomic qubit positioned 2-4 nm below a surface holding a molecule. The qubit acts as both the sensor and source of the magnetic field for encoding the nuclear spins of the molecule. The nuclear density data is then used to generate a 3D image of the molecular structure with angstrom-level resolution. (Credit: Perunicic et al., Nature Communications)

“In our work, we aim to address this problem by developing a blueprint for technology that may enable direct 3D visual insight into the atomic structure of individual molecules in their cellular environment. We achieve this by leveraging quantum computing technology in a concept that brings magnetic resonance imaging to the atomic scale.”

The proposed imaging system consists of an atomic qubit that is placed about 2 nanometers below a surface holding the molecule to be imaged. The qubit acts as both the source and the sensor of magnetic fields, with its quantum magnetic properties (its spin) interacting with the magnetic properties of the atoms in the target molecule. By collecting data on these interactions at various orientations, the system could determine the positions of individual atoms and construct a 3D image of the target molecule’s structure.

The scientists simulated the new technique using a rapamycin molecule (C51H79NO13), an immunosuppressant drug that is commonly used to prevent organ transplant rejection. In conventional imaging techniques, such as X-ray crystallography, it is difficult to detect the hydrogen atoms. But by measuring the hydrogen nuclear spin density, the nano-MRI method can generate 3D images of the hydrogen atoms, as well as the carbon atoms, with an average image resolution at the angstrom level. 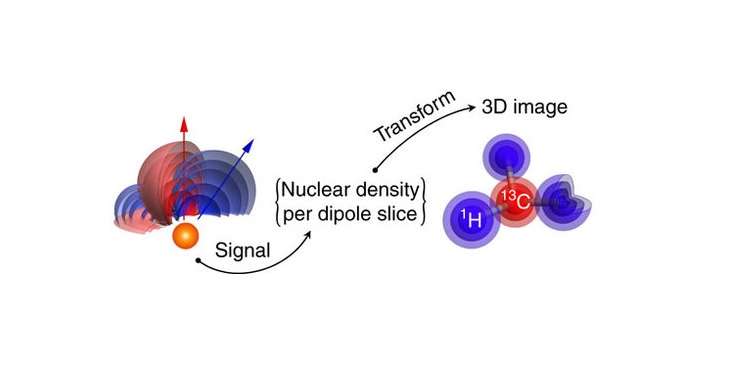 “The ability to image the atomic structure of molecules in their native cellular environments is vital to both understanding disease’s origin and finding its cure,” Hollenberg said. “For example, in the search and testing of new drugs one would first identify a target, often a membrane protein. Imaging the true structure of the protein in the cellular environment is key to understanding how drug molecules will interact with it. On the basis of this information, a drug molecule could be selected or designed. Importantly, the same imaging device would provide means to understand and test how well the drug is working, by observing its interactions with the target molecule on the atomic level. Our goal is to develop a versatile technology for observing the presently inaccessible bio-chemical atomic structure of important molecules in situ, in manner analogue to how hospital MRI machines observe the anatomy of our bodies.”

Due to the large amount of data involved, simulations show that the total time to generate an image of the rapamycin molecule is currently about 175 hours. However, the researchers expect that future improvements will greatly reduce this time, as well as further increase the resolution. In the future, they also plan to scale up the system design for imaging larger biomolecules.

“So far our work has focused on the fundamental theoretical groundwork, understanding how to physically construct the device with presently accessible technology,” Perunicic said. “We are developing the intricate quantum mechanical control that would provide the capacity to image individual molecules, and are also performing simulations to test the performance under realistic conditions. As the outcomes of these investigations were encouraging, the natural direction for the next couple of years is to venture into experimental proof-of-concept demonstrations.”