When you grab a pen, you instinctively put enough pressure in your grip so that you can hold the pen comfortably. Too little pressure and you would lose the pen, too much and you could crush the instrument.

For amputees who use prosthetic devices, the ability to judge the pressure of their grip is nearly impossible.

“Prosthetic hands only have the ability to open and close,” said Aadeel Akhtar, an M.D./Ph.D. candidate in neuroscience, who is building a prosthetic hand that will allow for touch feedback and joint location sensing, also known as proprioception. “However, the muscles of amputees still have the ability to make a pinch or a three-finger grasp, but that info isn’t being used by the prosthesis.”

“What we’re using now is a two- or three-phased hand, where you have to use specific alternative methods to make a movement, rather than the exact gesture that you want to use,” said retired Sergeant Garrett Anderson, who lost his right arm in Iraq in 2005 when a roadside bomb detonated under the truck he was driving. Anderson, a graduate student in rehabilitation counseling and a graduate assistant at the Center for Wounded Veterans in Higher Education at the University of Illinois, has been testing prototypes of the prosthesis with Akhtar, who works in the lab of Tim Bretl, an associate professor in aerospace engineering and Beckman faculty member in the Artificial Intelligence Group.

According to Anderson, arm prostheses have not advanced technologically since World War II.

“We’re pretty far behind in the technology,” says Anderson. “Prosthetic technology for leg amputees is about 10 to 20 years more advanced than for the arm. The hands are complicated. You don’t know the pressure against what you’re touching, or what the feeling of the resistance is to your grip, so sometimes you use more pressure than you really want to.”

“Commercial prosthetic hands are severely limited in providing sensory feedback,” said Akhtar, who started working on developing prosthetics in 2013, and has been working on incorporating sensory feedback after the group traveled to Ecuador last summer to test on Juan Suquillo, a patient with a below-elbow amputation sustained during a war injury.

Using a pressure sensor that is commonly found in cell phones, the researchers have been able to provide sensory feedback to the users. “We have a prototype finger now that has a pressure sensor built in. When you press the finger down, a correlating amount of electrical current will be sent through and across your skin, and your brain will perceive it as an actual feeling. The harder you push down, the stronger the sensation feels.” 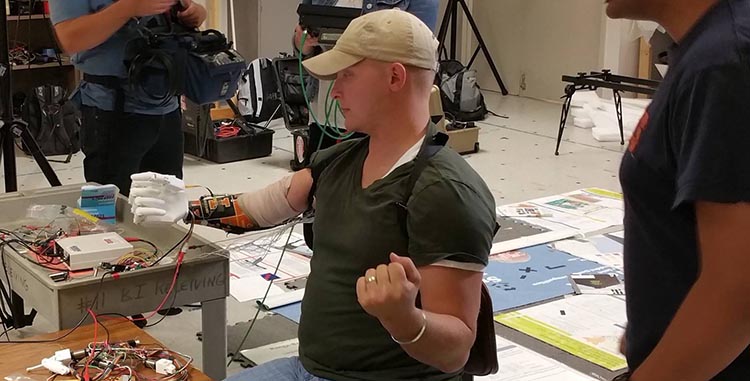 Retired Sergeant Garrett Anderson, who lost his right arm in Iraq in 2005 when a roadside bomb detonated under the truck he was driving, tests a prototype of the prosthesic arm with Aadeel Akhtar, an M.D./Ph.D. student in Beckman’s Artificial Intelligence Group.

According to Akhtar, machine learning algorithms make it possible for the prosthesis to pick up different patterns of muscle activity that happen in the residual limb.

“The prosthetic has eight sensors attached to the residual limb,” said Anderson. “It remembers the muscle movements that you perform when you think about making a fist or a pinching movement. The first time we did it, it reacted, which is pretty cool.”

The researchers have been working to make the muscle sensing platform less intrusive to the user by creating a battery-operated piece the size of a credit card, so it can fit in the socket.

“It’s a pretty tight fit,” said Anderson. “But whenever you think about making a fist or a pinching motion or squeezing a pen, certain muscles react, and the sensor reacts, allowing you to perform the task.”

Even though the sensation currents are sent through the forearm, Akhtar said the brain is remarkably adaptable and will rewire to associate the sensations in the forearm with movement in the fingers.

“The brain is plastic and will rewire itself pretty readily,” said Akhtar. “Prior studies have shown that your brain will start to think it’s your finger that’s feeling it, rather than your forearm.”

The group has implemented joint sensing into the latest prototype. When users can’t feel how their joints are moving, they often abandon their prostheses, says Akhtar.

“If you have a prosthetic device, when your eyes are closed and you move it around, you have no idea where it is,” said Akhtar. “That’s a huge problem. In order for people to use their prosthetic, they have to constantly look at it, and because of that, they’ll just use their other hand, often abandoning the prosthetic entirely.”

To combat this problem, the researchers have developed a cost-effective solution. A small contact pad adhered to the skin connects to the finger via a wire that will stretch the skin an amount proportional to the angle of the finger when it moves.

“Through this skin-stretching mechanism, we give proprioception back to the user in a way that is inexpensive, simple, and intuitive. We can apply this mechanism to any existing prosthesis, and we have plans to integrate it with prostheses not only in the United States, but in developing countries as well,” said Akhtar.

Akhtar and one of his undergraduate students in mechanical science and engineering, Patrick Slade, have launched PSYONIC to sell their prosthetic for $1,000–3,000—a fraction of the cost of prosthetics on the market today, which typically range from $30,000–40,000.

A low cost will also make the prosthetic accessible to people in developing countries. The group won the overall $15,000 grand prize, as well as the $10,000 Samsung Research Innovation grand prize, in the Cozad New Venture Competition, a program at the University of Illinois designed to encourage students to create new businesses.

They are continually looking for ways to reduce the cost and also create a good experience for the user. To create a stronger and more durable prosthetic, the multidisciplinary group, which includes neuroscientists, designers, engineers, computer scientists, and biologists, has switched from 3D printing to injection molding, which infuses heated material into the plastic mold. They also use rubber on the outside of the hand to absorb impact and molds over the sensors used for feedback.

Akhtar has been working with Cliff Shin, an assistant professor in industrial design and member of Beckman’s Cognitive Neuroscience Group, to build a model that looks more aesthetically pleasing, with the hope that it is more readily accepted by users. It also has a smooth surface that will allow users to put on silicon gloves to match their skin tone.

“I think this is a nice leap forward in prosthetic technology,” said Anderson. “Maybe it can inspire bigger and better technology.”