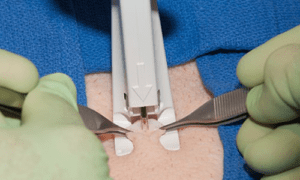 Health practitioners generally use bioabsorbable, thread-like material or a surgical stapler with metal staples to close the small openings created during laparoscopic surgery. Opus KSD’s method is faster and causes less scarring and infections. It could reduce costs for the healthcare system, according to its creators.

“General surgeons are finding themselves under pressure because the user-friendly metal staplers that became very popular in the 1990s are not cost-effective,” said Opus’s CEO Chuck Rogers in a case study from Proto Labs. “When people really began doing cost analysis, the 5 minutes that a surgeon saved in the operating room did not compensate for the fact that their patient still had to come back to have the surgical staples removed.”

Rogers, PhD, a biomedical engineer, worked with Dr. Kenneth Danielson, a Harvard-trained MD with 30 years of surgical experience, to develop the SubQ It! skin closure system that inserts bioabsorbable fasteners just beneath the skin in one click of the device.

The SubQ It! fastener has a mass of 0.0064 g and had to be 3D printed by the extrusion process of fused deposition modeling and laser-curing method of stereolithography (SL).

“Like the fasteners, we initially used FDM and SL on the delivery device in order to inexpensively modify the parts as the device evolved,” said Rogers.

The stapler has 9 plastic parts including 2 exterior shell halves, a plunger operated by the user and internal parts that release the fasteners. Proto Labs manufactures all of the parts that go into the SubQ It! stapler using injection molding.

Previously, Opus used Proto Labs’ CNC machining service to mill each part before switching from additive to injection molding. The milled parts were designed like they were being molded so that the device’s form, fit and function was able to be studied before molding.

“Once we put the prototypes together, we could test to make sure the fasteners were feeding correctly, and if the sliding action of the plunger was operating smoothly without jamming. If there were any problems, we would modify the part and have another one machined,” said Rogers. “Once everything was working, we made molds.”

The material used for the molded machined parts were acetals like Delrin. The final molded parts were Lustran ABS, an FDA-qualified material that helps give the parts structural rigidity. Lustran ABS can withstand gamma sterilization.

“Most of the parts were only modified one or 2 times, and we were really pleased with being able to match the performance of the mold to what we achieved in the machined parts,” said Rogers.

The SubQ It! production is currently being increased to meet the rising demand for the product, according to the company.