Assuming that we could visualize pathological processes such as cancer at a very early stage and additionally distinguish the various different cell types, this would represent a giant step for personalized medicine. Xenon magnetic resonance imaging has the potential to fulfil this promise – if suitable contrast media are found that react sensitively enough to the “exposure”. Researchers at the Leibniz-Institut für Molekulare Pharmakologie in Berlin have now found that a class of pumpkin-shaped molecules called cucurbiturils together with the inert gas xenon, enables particularly good image contrast – namely around 100 times better than has been possible up to now. This finding published in the November issue cover article of Chemical Science by the Royal Society of Chemistry points the way to the tailoring of new contrast agents to different cell types and has the potential to enable molecular diagnostics even without tissue samples in the future.

Personalized medicine instead of one treatment for all – especially in cancer medicine, this approach has led to a paradigm shift. Molecular diagnostics is the key that will give patients access to tailor-made therapy. However, if tumors are located in poorly accessible areas of the body or several tumor foci are already present, this often fails due to a lack of sufficient sensitivity of the diagnostic imaging. But such sensitivity is needed to determine the different cell types, which differ considerably even within a tumor. Although even the smallest of tumor foci and other pathological changes can be detected using the PET-CT, a differentiation according to cell type is usually not possible.

Scientists from the FMP are therefore focusing on xenon magnetic resonance imaging: The further development of standard magnetic resonance imaging makes use of the “illuminating power” of the inert gas xenon, which can provide a 10,000-fold enhanced signal in the MRI. To do this, it must be temporarily captured by so-called “cage molecules” in the diseased tissue. This has been more or less successful with the molecules used to date, but the experimental approach is still far from a medical application.

Cucurbituril Provides Stunning Image Contrasts
The research group led by Dr. Leif Schröder at the Leibniz-Institut für Molekulare Pharmakologie (FMP) has now discovered a molecule class for this purpose that eclipses all of the molecules used to date. Cucurbituril exchanges around 100 times more xenon per unit of time than its fellow molecules, which leads to a much better image contrast. “It very quickly became clear that cucurbituril might be suitable as a contrast medium,” reports Leif Schröder. “However, it was surprising that areas marked with it were imaged with a much better contrast than previously.” The explanation is to be found in the speed. Upon exposure, so to speak, cucurbituril generates contrast more rapidly than all molecules used to date, as it only binds the xenon very briefly and thus transmits the radio waves to detect the inert gas to very many xenon atoms within a fraction of a second. In this way, the inert gas is passed through the molecule much more efficiently.

In the study, which appeared in the specialist journal “Chemical Science”, the world’s first MRI images with cucurbituril have been achieved. With the aid of a powerful laser and a vaporized alkali metal, the researchers initially greatly strengthened the magnetic properties of normal xenon. The hyperpolarized gas was then introduced into a test solution with the cage molecules. A subsequent MRI image showed the distribution of the xenon in the object. In a second image, the curcurbituril together with radio waves destroyed the magnetization of the xenon, leading to dark spots on the images.

“Comparison of the two images demonstrates that only the xenon in the cages has the right resonance frequency to produce a dark area,” explains Schröder. “This blackening is possible to a much better degree with cucurbituril than with previous cage molecules, for it works like a very light-sensitive photographic paper. The contrast is around 100 times stronger.” 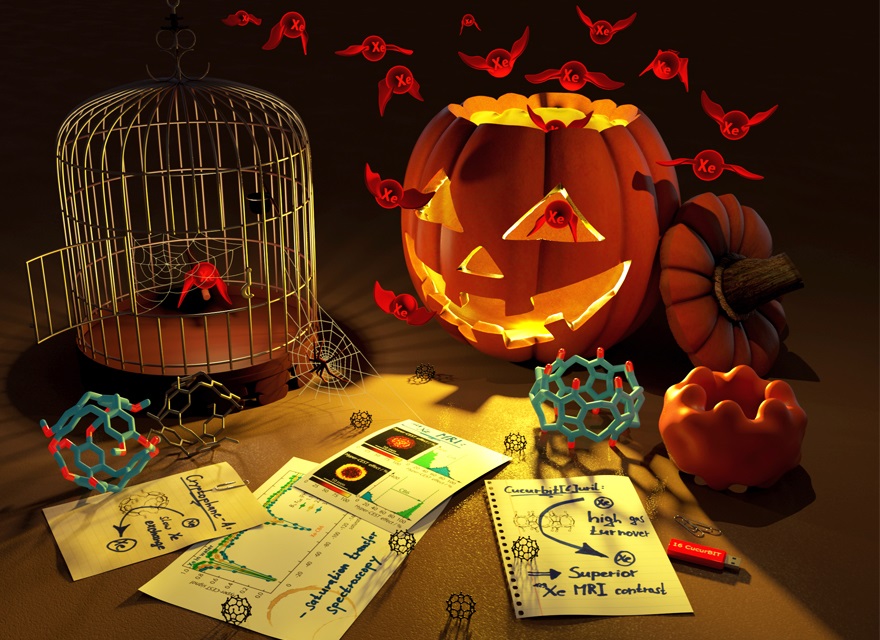 A Highly Specific Contrast Medium for Each Cell Type
Initial tests with cell material in which cucurbituril is also able to detect a certain enzyme that commonly occurs in cancer cells have also just been published in another publication. On the basis of the enzyme reaction, it is possible to conclude the malignancy of the cells. What is special about this is that relatively little cell material is then sufficient to image the tumor cells in the MRI. The researchers believe that it may be possible to detect even very small tumor foci using this new method in the future. However, there is still a long way to go. To begin with, animal studies must be conducted to determine whether it is possible to transfer the test results obtained to date to the living organism. If so, they can be used to develop highly sensitive contrast media that are able to mark further enzymes and thus a range of different cell types.

This would be a milestone for cancer diagnostics. By administering several contrast media in an MRI examination, doctors would already be able to classify the cancer cells on a molecular level and could individualize therapy appropriately. And this without the need for stressful biopsies, as emphasized by Leif Schröder. His colleague at Jacobs University Bremen, Dr. Andreas Hennig, names a further plus point: “Xenon magnetic resonance imaging has the great advantage that, in contrast to classical radioactive contrast media, there is no notable radiation exposure for the patient. Apart from this, cucurbiturils have proved to be harmless in toxicity tests with mice,” says the chemist.

In addition to the ambitious goal of applying xenon-MRI as a kind of substitute for biopsy in humans, the study can soon make a contribution to drug research. The effect of new substances on the course of diseases can namely be tested in the animal studies that have to be conducted anyway.

But, in the discovery of cucurbituril, first author Martin Kunth sees just the beginning of a promising development. For the study also provides a very general explanation of which properties a Xe-MRI contrast medium must have to be detected more sensitively. “We have made use of this knowledge specifically with cucurbituril, but it can also be transferred to further molecules,” says physicist Kunth. “We will no doubt be able to develop much more sensitive contrast media now using this approach and precisely this was the key point in this innovative imaging procedure.”

The Leibniz-Institut für Molekulare Pharmakologie (FMP) is part of the Forschungsverbund Berlin e.V. (FVB), who legally represents eight non-university research institutes – members of the Leibniz Association – in Berlin. The institutions pursue common interests within the framework of a single legal entity while maintaining their scientific autonomy. More than 1,800 employees work within the research association. The eight institutes were founded in 1992 and emerged from former institutes of the GDR Academy of Sciences.