A research team including developmental biologist Stephen A. Duncan, D. Phil., SmartState Chair of Regenerative Medicine at the Medical University of South Carolina (MUSC), has found a better way to purify liver cells made from induced pluripotent stem cells (iPSCs). Their efforts, published August 25, 2016 in Stem Cell Reports, will aid studies of liver disease for the National Heart, Lung, and Blood Institute (NHLBI)’s $80 million Next Generation Genetic Association Studies (Next Gen) Program. The University of Minnesota (Minneapolis) and the Medical College of Wisconsin (Milwaukee) contributed to the study.

This new methodology could facilitate progress toward an important clinical goal: the treatment of patients with disease-causing mutations in their livers by transplant of unmutated liver cells derived from their own stem cells. Previous attempts to generate liver-like cells from stem cells have yielded heterogeneous cell populations that bear little resemblance to diseased livers in patients.

NHLBI’s Next Gen was created to bank stem cell lines sourced from patients in genome-wide association studies (GWAS). The goal of the NHLBI Next Gen Lipid Conditions sub-section–a collaborative effort between Duncan and Daniel J. Rader, M.D., and Edward E. Morrisey, Ph.D., both at the University of Pennsylvania–is to help determine the genetic sources of heart, lung, or blood conditions that also encompass the liver. These GWAS studies map the genomes in hundreds of people as a way to look for genetic mutation patterns that differ from the genomes of healthy individuals. 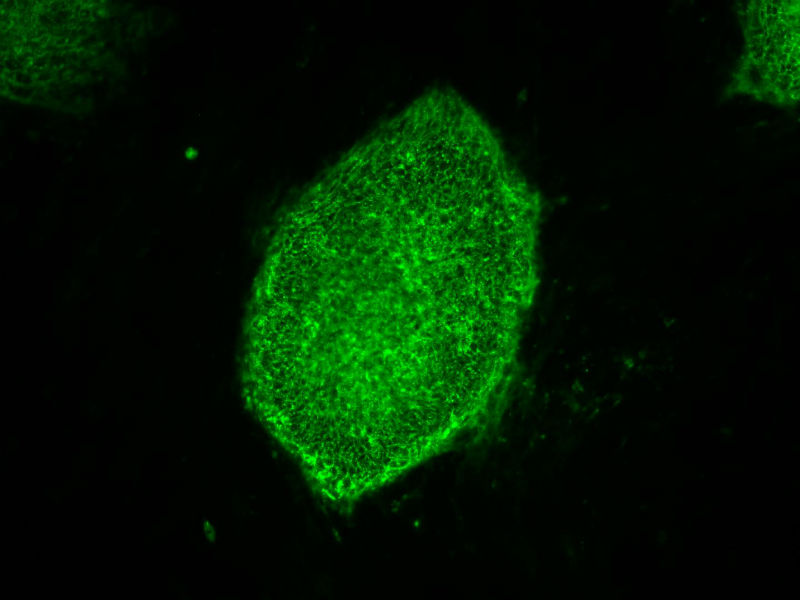 A GWAS study becomes more powerful–more likely to find the correct genetic mutations that cause a disease–as more genomes are mapped. Once a panel of suspected mutations is built, stem cells from these individuals can be “pushed” in culture dishes to differentiate into any of the body’s cells, as for example liver-, heart-, or vascular-like cells. The cells can be screened in high-throughput formats (i.e., cells are expanded and cultured in many dishes) to learn more about the mutations and to test panels of drugs that might ultimately help treat patients harboring a disease.

The problem arises during the “pushing.” For example, iPSCs stubbornly refuse to mature uniformly into liver-like cells when fed growth factors. Traditionally, antibodies have been used to recognize features of maturity on the surfaces of cells and purify cells that are alike. This approach has been crucial to stem cell research, but available antibodies that recognize mature liver cells are few and tend to recognize many different kinds of cells. The many types of cells in mixed populations have diverse characteristics that can obscure underlying disease-causing genetic variations, which tend to be subtle.

“Without having a pure population of liver cells, it was incredibly difficult to pick up these relatively subtle differences caused by the mutations, but differences that are important in the life of an individual,” said Duncan.

Instead of relying on antibodies, Duncan and his crew embraced a new technology called chemoproteomic cell surface capture (CSC) technology. True to its name, CSC technology allowed the group to map the proteins on the surface of liver cells that were most highly produced during the final stages of differentiation of stem cells into liver cells. The most abundant protein was targeted with an antibody labeled with a fluorescent marker and used to sort the mature liver cells from the rest.

The procedure was highly successful: the team had a population of highly pure, homogeneous, and mature liver-like cells. Labeled cells had far more similar traits of mature hepatocytes than unlabeled cells. Pluripotent stem cells that had not differentiated were excluded from the group of labeled cells.

Duncan cautions that transplantation of iPSC-derived liver cells is not yet ready for translation to the clinic. But the technology for sorting homogeneous liver cells can be used now to successfully and accurately model and study disease in the cell culture dish.

“We think that by being able to generate pure populations, it will get rid of the variability, and therefore really help us combine with GWAS studies to identify allelic variations that are causative of a disease, at least in the liver,” said Duncan.

Founded in 1824 in Charleston, The Medical University of South Carolina is the oldest medical school in the South. Today, MUSC continues the tradition of excellence in education, research, and patient care. MUSC educates and trains more than 3,000 students and residents, and has nearly 13,000 employees, including approximately 1,500 faculty members. As the largest non-federal employer in Charleston, the university and its affiliates have collective annual budgets in excess of $2.2 billion. MUSC operates a 750-bed medical center, which includes a nationally recognized Children’s Hospital, the Ashley River Tower (cardiovascular, digestive disease, and surgical oncology), Hollings Cancer Center (a National Cancer Institute designated center) Level I Trauma Center, and Institute of Psychiatry. For more information on academic information or clinical services, visit musc.edu. For more information on hospital patient services, visit muschealth.org.