Isotopes — atoms of an element that are chemically identical but vary in neutron number and mass — are essential to nuclear medicine. In an effort to return to a stable mass, isotopes known as radioisotopes emit radiation that can damage diseased tissue and can be traced in certain environments, making them useful for medical imaging and cancer therapy, as well as tracking environmental change in oceans and soil, studying the fundamental science of nuclei and safeguarding national security.

Of the thousands of radioisotopes identified so far, a few occur in nature, but most must be produced in nuclear reactors or particle accelerators. The most widely used medical radioisotope is technetium-99m (Tc-99m), the daughter isotope (meaning the product of radioactive decay) of molybdenum-99 (Mo-99).

The 66-hour half-life of Mo-99, which is currently produced by the fission of uranium targets in research reactors, makes it a challenge to produce and transport around the world before it spontaneously decays into Tc-99m. Built 30 to 50 years ago at the height of the Atoms for Peace era, several of the world’s key nuclear reactors producing Mo-99 have experienced unplanned shutdowns that have disrupted the Mo-99 radioisotope supply. 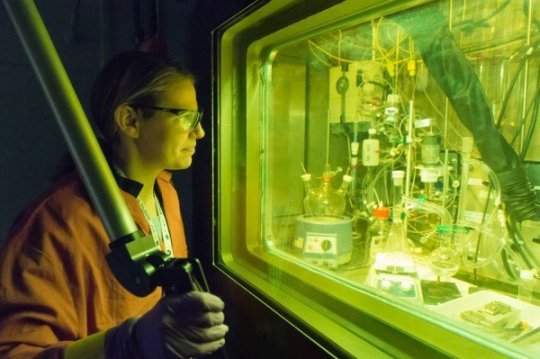 With the possibility of an unstable supply, there is a strong incentive to develop alternative production methods for this essential isotope. To address this issue, the National Nuclear Security Administration (NNSA) is supporting commercial partners to accelerate the establishment of a domestic, commercial Mo-99 production capability that does not use highly enriched uranium.

At the same time, the NNSA is working to significantly reduce the risk of nuclear proliferation by supporting international Mo-99 producers in converting their Mo-99 production processes from highly enriched uranium (HEU) to low-enriched uranium (LEU). The U.S. Department of Energy’s (DOE’s) Argonne National Laboratory actively supports both of these efforts.

“Beginning in the 1980s, Argonne focused on converting targets for the production of molybdenum-99 from highly enriched uranium to low-enriched uranium and provided the technology to do so,” said George Vandegrift, a Distinguished Fellow in the Nuclear Engineering Division at Argonne.

In the past five years, Argonne has partnered with industry and other national laboratories under NNSA stewardship to help establish U.S. production of Mo-99.

Now, in addition to continuing this technology development for Mo-99 production methods for the DOE and NNSA, Argonne is also advancing new production and processing approaches for other promising radioisotopes with the encouragement and support of the DOE Isotope Program.

Whereas Tc-99m, derived from its parent isotope Mo-99, is used primarily for diagnostic procedures, there is great interest in the development of efficient production methods for isotopes that can be used for cancer therapy. Argonne is using its recently upgraded electron linear accelerator (LINAC), along with its historical expertise in developing targets and recovering and purifying radioisotopes, to explore a variety of such therapeutic isotopes.

Argonne’s electron LINAC operates in a “sweet spot” for making particular radioisotopes. At 30-50 mega-electron volts and relatively high currents, the LINAC has the capability to produce potentially important radioisotopes. For example, radioisotopes like copper-67 (Cu-67), and scandium-47 (Sc-47) — whose use has been impeded in the development of pharmaceutical applications by lack of reliable supply or low specific activity.

More than 80 percent of nuclear diagnostic procedures (40 million per year) worldwide use Tc-99m. The United States alone uses half of the world’s supply, yet imports 100 percent of the parent isotope Mo-99 from foreign countries.

Vandegrift said technetium is widely used because of its radiological properties and rich chemistry. Tc-99m has a short half-life, emits gamma rays at energies that are easy to detect and binds to many kinds of proteins that allow the radioisotope to image specific tissues and functions of the body.

“When Mo-99 faced a crisis in supply, NNSA expanded the HEU to LEU conversion program to include development of domestic supplies of Mo-99,” Vandegrift said.

Funded by the NNSA, Argonne is collaborating with two U.S. companies, SHINE Medical Technologies and NorthStar Medical Technologies, LLC, to establish a scalable, safe and reliable way to produce, recover and purify Mo-99 that meets the required pharmaceutical standards for use of Tc-99m as a radiopharmaceutical. Argonne demonstrated each company’s production pathway with its LINAC and provided expertise in target chemistry and post processing.

Both companies are in the process of establishing production facilities that will allow them to make and distribute enough Mo-99 to each meet 50 percent of U.S. demand without the use of HEU.

The proposed SHINE production method uses a low-energy accelerator-based neutron generator to propagate fission of a low-enriched uranyl sulfate solution, producing hundreds of isotopes, including Mo-99. Argonne researchers have demonstrated the feasibility of this method using the electron LINAC to produce neutrons via a converter to irradiate a uranyl sulfate solution. They also developed technologies for the recovery and purification of Mo-99, which makes up six percent of the fission products present in the irradiated solution. Argonne recently produced and processed a significant quantity of Mo-99 using this technology that was developed for SHINE. The Mo-99 was sent to GE Healthcare for testing and passed all purity and utilization requirements. The U.S. Nuclear Regulatory Commission recently authorized issuance of a construction permit for SHINE.

“SHINE has benefited tremendously from the work Argonne has done to help design and test our process. Argonne’s unique capabilities meant they were able to demonstrate the SHINE process years before our manufacturing facility is built, and that has greatly reduced our startup risks,” said Katrina Pitas, SHINE Vice President of Business Development. “We’re grateful to George Vandegrift, a pioneer in the LEU Mo-99 world, and his entire team for the shrewd insights and hard work they’ve contributed to the SHINE project.”

The NorthStar process, on the other hand, uses a high-energy electron beam to produce photons in a converter target to irradiate a set of stable Mo-100 sintered disks. In this process, photons hit atoms of Mo-100, discharging neutrons and leaving a significant yield of Mo-99 for processing. The Argonne team optimized disk chemistry and structure and developed a chemical recycling pathway that will enable NorthStar to reuse costly enriched-molybdenum target material. The test facility built at Argonne, in collaboration with Los Alamos National Laboratory, is a pilot-scale operation with all of the components of NorthStar’s proposed production unit. In the last production test run at Argonne, several curies of Mo-99 were produced and sent to NorthStar for evaluation.

“NorthStar has enjoyed significant support and contribution from Argonne National Laboratory over the past five or more years as we developed and optimized our production process for Mo-99 via an electron accelerator,” said Jim Harvey, NorthStar Senior Vice President and Chief Science Officer. “The development of chemical processes to dissolve and recover enriched target material combined with the ability to now run production of meaningful irradiations using Argonne’s electron accelerator are directly contributing to our successful future deployment of this Mo-99 production process in the United States.”

With successful demonstrations of both processes developed at Argonne’s LINAC, SHINE and NorthStar have continued plans to use accelerators for production. SHINE will use an accelerator-based neutron generator at its Janesville, Wis., facility for its neutron-induced-fission process, and NorthStar has long-term plans to install its own electron LINAC at its Beloit, Wis., facility as the basis of its gamma-induced-reaction process. Back at Argonne, researchers, with support and encouragement of the DOE Isotope Program, are expanding their radioisotope program with the goal of performing groundbreaking research and carrying out the development and demonstration needed for supplying a range of key radioisotopes.

Nontoxic with suitable emissions for radiotherapy and imaging and a 2.6-day half-life, Cu-67 has been recognized for decades for its suitable properties as a “theranostic” — a combined therapeutic and diagnostic radioisotope.

“Cu-67 could allow doctors to monitor therapy in real-time,” said David Rotsch, Argonne chemist. “The beta particles it emits have been shown to penetrate a few millimeters into tissues, killing cancer cells, but it also emits gamma radiation that can be used to track how well it is eradicating those cancer cells.”

Using the LINAC, researchers produced high specific activity Cu-67 and demonstrated small-scale production of the radioisotope. Now, with funding from the DOE Isotope Program, they are preparing to produce enough Cu-67 to meet estimated demand for external R&D and future clinical trials. Argonne will distribute Cu-67 through the DOE’s National Isotope Development Center as early as November of this year.

“We’re starting at 100 milliCurie batches and can increase to two Curie batches depending on demand,” Rotsch said.

The team also received Argonne Laboratory Directed Research and Development (LDRD) funding in fall 2015 to investigate the production of various other radioisotopes with the electron LINAC. One focus of the LDRD is creating a production mode for Sc-47 that will enable quick and simple processing for distribution.

Like Cu-67, Sc-47 has characteristics that make it a good theranostic candidate. Argonne researchers are developing a process for the production and purification of Sc-47 to minimize processing times and maximize yields. This isotope would also be made available through the DOE Isotope Program.

“We’re in a good position because, right now, our LINAC is unique in having a higher power and energy beam,” said Sergey Chemerisov, Accelerator Facility Manager in the Nuclear Engineering Division. “We’re the only DOE LINAC that can do this job right now.”