When replacing a defective aortic valve with a new one, restoring function is the first priority. However, variables such as durability, length of surgery, duration of heart stoppage, size of the surgical incision, postoperative pain, and complications are other important considerations. In a presentation at the 96th AATS Annual Meeting, the results of the TRANSFORM Trial, a large multicenter study evaluating the safety and performance of an investigational rapid deployment aortic valve replacement (RDAVR) system for patients with severe aortic stenosis, was presented. The results show that compared to more conventional methods, this system was associated with excellent one-year survival, reduced the duration of heart stoppage, and was associated with clinically acceptable postoperative complication rates. 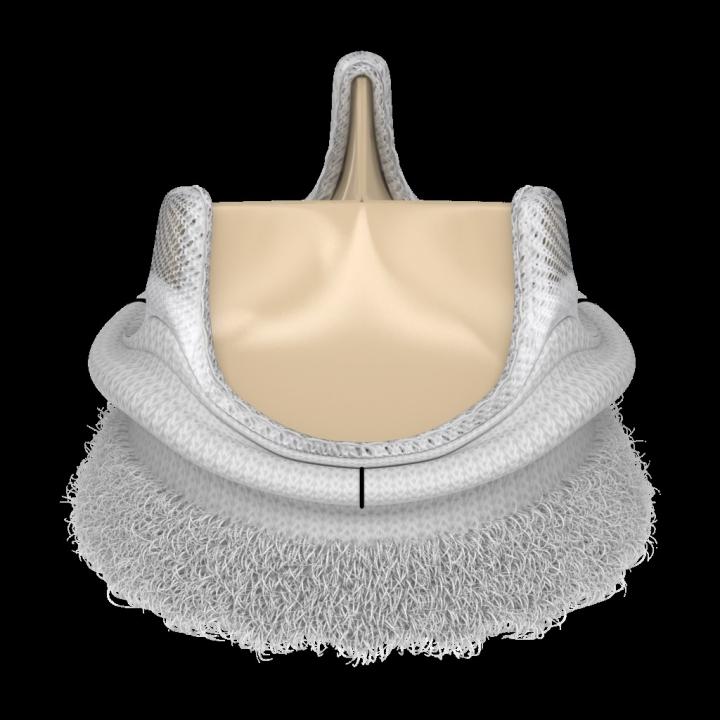 The TRANSFORM trial was designed to evaluate the safety and performance of an investigational rapid deployment aortic valve replacement (RDAVR) system for patients with severe aortic stenosis. Presented at the 96th AATS Annual Meeting, investigators showed that more than 96% of TRANSFORM patients had survived after one year and only 0.2% required reoperation. Cardiac function improved in 73%. Compared to conventional treatment, this procedure required significantly less cross-clamp and cardiopulmonary bypass times, even when smaller incisions were used.

The investigational RDAVR system used in the TRANSFORM trial, the EDWARDS INTUITY valve system, was developed to combine the ease-of-use functionality of rapid deployment valve fixation with the proven long-term durability of the PERIMOUNT Magna Ease valve. The device tested included new innovations such as a polyester sealing cloth and a balloon-expandable stainless steel frame.

“The EDWARDS INTUITY valve system reduces operative complexity by allowing the valve to be placed using only three guiding sutures,” explained Walter Randolph Chitwood, Jr., MD, founder of the East Carolina Heart Institute of East Carolina University, Greenville, NC. “The TRANSFORM clinical trial shows that this device reduces the duration that the heart is stopped. By simplifying the steps to implant the aortic valve, surgeons are able to use smaller, less invasive incisions. This benefits patients by causing less pain and promoting faster recovery.”

The trial was a prospective, nonrandomized, single-arm clinical trial that enrolled patients in 29 medical centers. Enrolled patients were at least 18 years of age and required aortic valve replacement. Of 889 enrolled patients, 839 received an EDWARDS INTUITY. The study evaluated both the first-generation EDWARDS INTUITY (n=109) and the second-generation EDWARDS INTUITY Elite (n=730). The mean age was 73.5 years and 52.2% were categorized as New York Heart Association (NYHA) Class II and 30.5% as NYHA Class III (NYHA classes are a measure of heart failure). Some patients also underwent other procedures at the same time, such as coronary artery bypass grafting (28%) and atrial ablation (5.5%). Three surgical approaches were utilized. Almost 60% required full sternotomy, 33% required mini upper sternotomy and 8% right anterior thoracotomy.

Thirty-day mortality was 0.8% and 96.4% were alive at the end of the first year post-surgery. At 30 days, the reoperation rate was 0.2% and 0.1% required valve removal. Functionally, 73% showed improvement in their NYHA heart failure classification, while 23.6% were unchanged, and 3.3% worsened at one year.

In terms of complications, 3.5% experienced thromboembolism and 1.3% had major bleeding within 30 days. The investigators observed that the rates of leakage around the valves (1.1% with leakage and 0.2% with major leakage) were clinically acceptable for this type of procedure. By two years, 90.3% of patients had no or trivial leaks and 9.7% had mild leakage.

For all three surgical approaches, interruption of the normal circulation to accomplish the aortic replacement was significantly less than required by conventional surgery as reported in the STS Adult Cardiac Surgery Database. For example, for patients undergoing full sternotomy, average time for aortic cross clamping went from 76.4 minutes to 49.3 minutes and cardiopulmonary bypass time was reduced from 104.2 minutes to 69.2 minutes with INTUITY. Similar time savings were observed in patients who underwent smaller incisions with mini sternotomy.