Duke engineers have developed a technique to make artificial arteries that naturally produce biochemical signals vital to their functions. The technique is also ten times faster than current methods for tissue engineering of blood vessels.

Arterial walls have multiple layers of cells, including the endothelium and media. The endothelium is the innermost lining of all blood vessels that interacts with circulating blood. The media is made mostly of smooth muscle cells that help control the flow and pressure of the blood within. These two layers communicate through a suite of chemical signals that control how the vascular system reacts to stimuli such as drugs and exercise.

Staining on these slides shows that engineered human arteries produce contractile proteins (left) and calponin (right) just one week after being grown in culture. These two molecules allow the arteries to contract and dilate in response to environmental stimuli. (Credit: George Truskey Lab, Duke University)

In a new study, biomedical engineers from Duke’s Pratt School of Engineering successfully engineered artificial arteries containing both layers and demonstrated their ability to communicate and function normally.

The blood vessels being reported Feb. 18 in Nature Scientific Reports are also miniaturized to enable 3D microscale artificial organ platforms to test drugs for efficacy and side effects. The new technique may also enable researchers to conduct experiments on arterial replacements in record time.

“We wanted to focus on arteries because that’s where most of the damage is caused in coronary diseases,” said George Truskey, the R. Eugene and Susie E. Goodson Professor of Biomedical Engineering and Vinik Dean of the Pratt School of Engineering at Duke.

“Most previous studies had focused on the media cells but hadn’t spent much time on the endothelial cells, and nobody had shown how the two would interact,” Truskey said. “Many of the techniques for creating artificial tissue also were rather lengthy, which was frustrating.”

The frustration came from the six-to-eight weeks it took to grow arteries in the laboratory. Turning to the literature, Truskey found a paper detailing a much faster technique used to create a trachea. The method works by putting cells of the desired tissue inside collagen and compressing for a few minutes. This both squeezes out excess water and increases the mechanical strength of the resulting tissue.

For the next six months, graduate student Cristina Fernandez worked to convert the technique so she could create arteries. And not just any arteries — arteries scaled down to one tenth the size of a typical human’s, which made the translation even trickier. 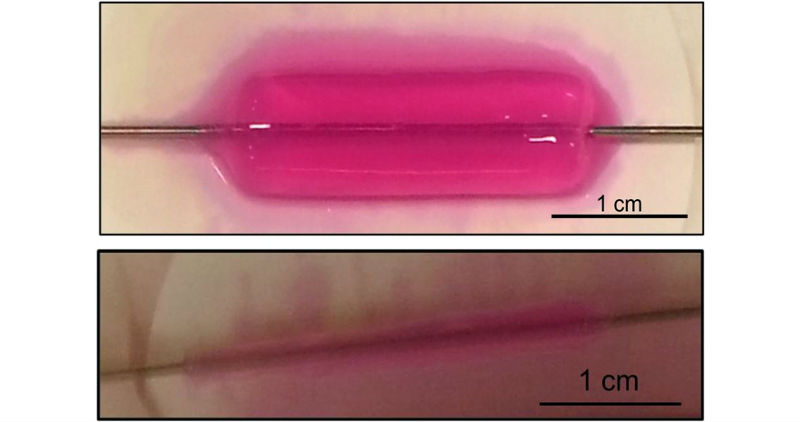 Human arteries are constructed from cells embedded within collagen gels (top) that are treated to remove more than 90 percent of the water content (bottom). This technique increases the mechanical strength of the engineered tissues, allowing for immediate culture under physiological conditions without waiting for the tissues to mature. (Credit: George Truskey Lab, Duke University)

“With a smaller diameter, we could make a lot of these artificial vessels in a short amount of time,” said Truskey. “We can make these vessels and use them in only a few hours. To me that was the biggest advance, because spending several weeks on each set was driving me crazy.”

Once that hurdle was passed, the team tested the new arteries to see how they would respond to natural and artificial stimuli. In one test, they administered statins to see if they would block inflammation as they do in patients. In another test, the researchers looked to see if chemical signals released from the endothelial cells would cause the media layer to relax and constrict, as they do in the human body.

In both instances, the engineered arteries behaved normally.

The next step, according to Truskey, is to look at how some select rare genetic diseases affect the arteries. The end goal is to create a system that can be used to test drugs that is more accurate and reliable than animal models.

That goal is part of the Tissue Chip for Drug Screening program, which is funded by the National Institutes of Health to improve ways of predicting drug safety and effectiveness. The program is tasked with creating 3D human tissue chips and combining them into an integrated system that mimics the complex functions of the human body, so that promising pharmaceuticals can be better tested before entering human trials.

At Duke, one side of the project has already demonstrated the fabrication of skeletal muscle that responds physiologically to stimuli such as drugs. With the development of these small artificial arteries, the two systems can be connected and eventually integrated with other tissue proxies, such as artificial, functioning liver tissue, which is also being pursued at Duke.

But the new technique also could be a boon to researchers everywhere creating artificial arteries.

“While our arteries are small and intended for testing, they’re just as mechanically strong as those intended to be put inside of the body,” said Truskey. “So the technique could be beneficial to researchers trying to create artificial arteries to replace damaged ones in patients as well.”