Real-time monitoring of the dynamics of endogenous molecules in organisms is an important aspect in the study of diseases. However, this process is difficult because of issues such as sensitivity, resolution, and invasiveness. This challenge has become a major motivation for the development of new effective tools for real-time monitoring of analytes of interest.

In their latest study, a team of Nagoya University-centered researchers have successfully found a novel approach for in vivo real-time monitoring of metabolites using a combination of probe electrospray ionization (PESI), a unique ambient ionization technique, and tandem mass spectrometry (MS/MS), a technique for finer characterization of endogenous metabolites within a sample of interest, particularly when the metabolites cannot be identified by single MS. The team reported its study in Analytical Chemistry.

“While the thin probe needle in PESI enables direct sampling with subcellular-level invasiveness, and combinational use of PESI and single mass spectrometry (PESI/MS) has been applied to direct analysis of target compounds, PESI/MS lacks selectivity because PESI does not possess chromatographic separation property,” study co-first author Yumi Hayashi says. “Therefore, combinational use with a specific detector such as MS/MS must be explored for reliable identification of metabolites.”

The new analytical system developed by the team consists of a free-movable stage and a unique probe electrospray ionization-tandem mass spectrometer unit, which uses an extremely thin solid needle (with a tip diameter of about 700 nm) for direct sampling and ionization. The system successfully monitored eight cerebrum metabolites related to central energy metabolism in an isoflurane-anesthetized mouse in real time with a 20-second interval. Notably, neither remarkable traumatic injury nor edema was observed on the brain surface, examined 3 hours after in vivo real-time monitoring. 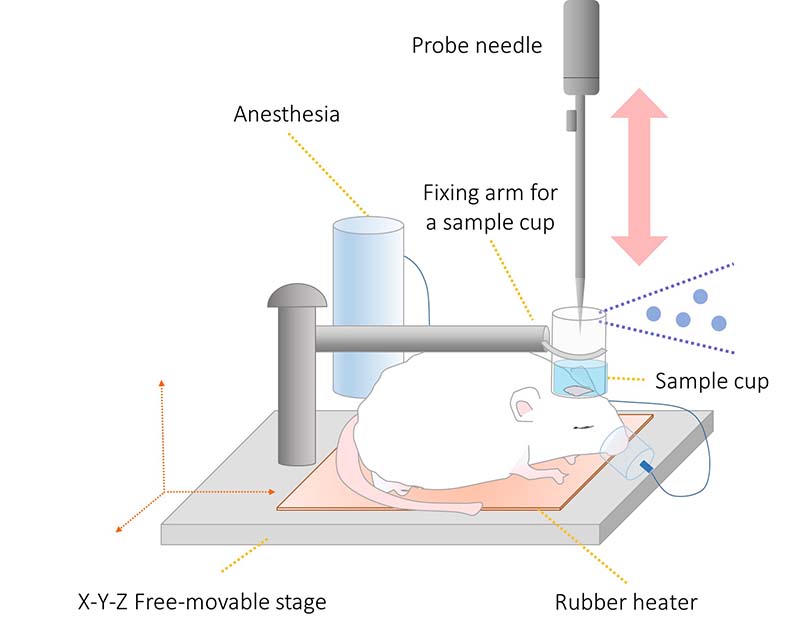 To further validate the system, the team applied it to cannabinoid type-1 receptor agonist (CB1R-agonist) administered and control mice brains, and succeeded in capturing the dynamics of energy metabolism. CB1R-agonist has been shown to decrease food intake and regulate body-weight gain.

“The demonstrated capabilities of the new PESI/MS/MS system make it a promising tool for the analysis of neurodegenerative diseases, such as Alzheimer’s disease. We can also use it to analyze other tissues such as liver and kidney, suggesting a wide-range applicability of the present system,” corresponding author Kei Zaitsu says. “Using this system, we believe a new research field called ‘real-time metabolomics’ can be explored and expanded.”