Red Bull Racing is to use a unique new performance boosting vest
during the Turkish Grand Prix in Istanbul this Sunday.

The pit team – who helped put Mark Webber and Sebastian
Vettel at the top of the drivers’ table following the Grand
Prix De Monaco – will all be wearing a FIR-VEST throughout
the race to give them improved muscle strength, balance and
circulation. 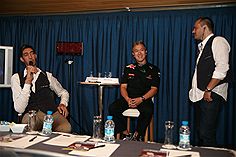 Paul Cheung of Red Bull Racing at the FIR-TEX event

Last night the FIR-VEST was unveiled and demonstrated to the
world’s media at a press conference in Istanbul held by its
inventors, Cyprus-based company FIR-TEX Ltd.

Through  live blood analysis tests on volunteers, they were
able to show how blood circulation increased after only ten minutes
of wearing the vest, enabling better transport of oxygen to organs
and putting less strain on the heart.

Strength and balance tests were also carried out on guests to
showcase the improved stability gained when wearing the textile
garment, which uses Far Infrared Rays (known to be healthy
radiations) that switch on as soon as the body heat activates
them.

“What we have developed using Far Infrared Rays is a true
revolution,” said Iwan Postel, co-founder and CEO of FIR-TEX.
“As you can imagine we are very proud to be partnered with
Red Bull Racing and are very much looking forward to working within
other sporting arenas, having already worked with some world-class
footballers and the Dutch Handball Federation.”

The decision to make FIR-TEX an official Red Bull Racing
Innovation Partner came after a year of discussions and testing by
the Formula One team’s chiropractor Paul Cheung.

Mr Cheung has spent much time putting  the FIR-VEST to the
test not only with the Red Bull Racing team  but also with
private patients and football players at clubs such as
Middlesbrough FC, Sheffield United and Leeds United.

“In F1 racing there is a real obsession with high
performance, especially in relation to the human body,” said
Mr Cheung at an FIR-TEX press conference yesterday.

“We’re very happy with FIR-TEX through what
we’ve experienced so far and I’m looking forward to
seeing its benefits not only here in Istanbul but throughout the
season.”

FIR (Far Infrared Ray) radiations can be created with a mixture
of very few mineral oxides (three-four), but no company previously
has come forward with the scientific evidence to support its
claims.

Mr Postel and his elder brother Dick however have progressed this
field of technologies and developed a new ennobled tissue,
including not just three or four oxides but dozens of the best
quality mineral oxides, with unequalled performance results.

“The results from our tests have been impressive and
we’re now about to launch a worldwide scientific test in
order for the FIR-VEST to become medically approved, enabling it to
be insured by health care insurances and accessible to as many
people as possible,” added Mr Postel.

More information about FIR-TEX can be found on their website at
www.fir-tex.com and those eager
to try this new technology can purchase their very own FIR-VEST
from the site.