Our bodies are storytellers. Every heartbeat, joint creak and electric signal of a neuron tells a story of what is going right — and wrong — within the vast, complex system that gives us life.

While we now have the wearable technology to translate some of these stories — think Fitbits or health trackers on our smartphones — for bioelectronics pioneer John A. Rogers, PhD, and his colleagues, those devices only scratch the surface of what we can discern from the body in real time.

Rogers, who joined Northwestern in 2016, develops electronic devices that can bend, stretch, twist and integrate within the human body to both diagnose and treat disease. As the Louis Simpson and Kimberly Querrey Professor of Materials Science and Engineering, Biomedical Engineering and Neurological Surgery, Rogers conducts work that cuts across disciplines to translate innovative research into real medical breakthroughs.

Recently, Rogers became interested in developing a wearable patch that could record acoustics within the body, such as sounds within a joint or vibrations from speech. “We asked ourselves if it would be possible to build a soft, wireless, skin-interfaced device with the form factor of a Band-Aid and the functions of a stethoscope to continuously and precisely measure the body’s subtle mechanical and acoustic signatures,” he says.

Within a short period of time, and through galvanizing Northwestern connections, what Rogers called an “exploratory exercise in materials science and applied physics” turned into a real diagnostic and treatment tool to measure a rehabilitating stroke patient’s patterns of speech and swallowing. The result, the first wearable device designed for the throat, is a “much more personalized, quantitative approach to rehabilitation,” Rogers says.

The patch is only the beginning. Together with Arun Jayaraman, PhD, associate professor of Physical Medicine and Rehabilitation and his lab in the Shirley Ryan AbilityLab, Rogers has developed sensors that are deployed across the body to give a comprehensive view of patient recovery. 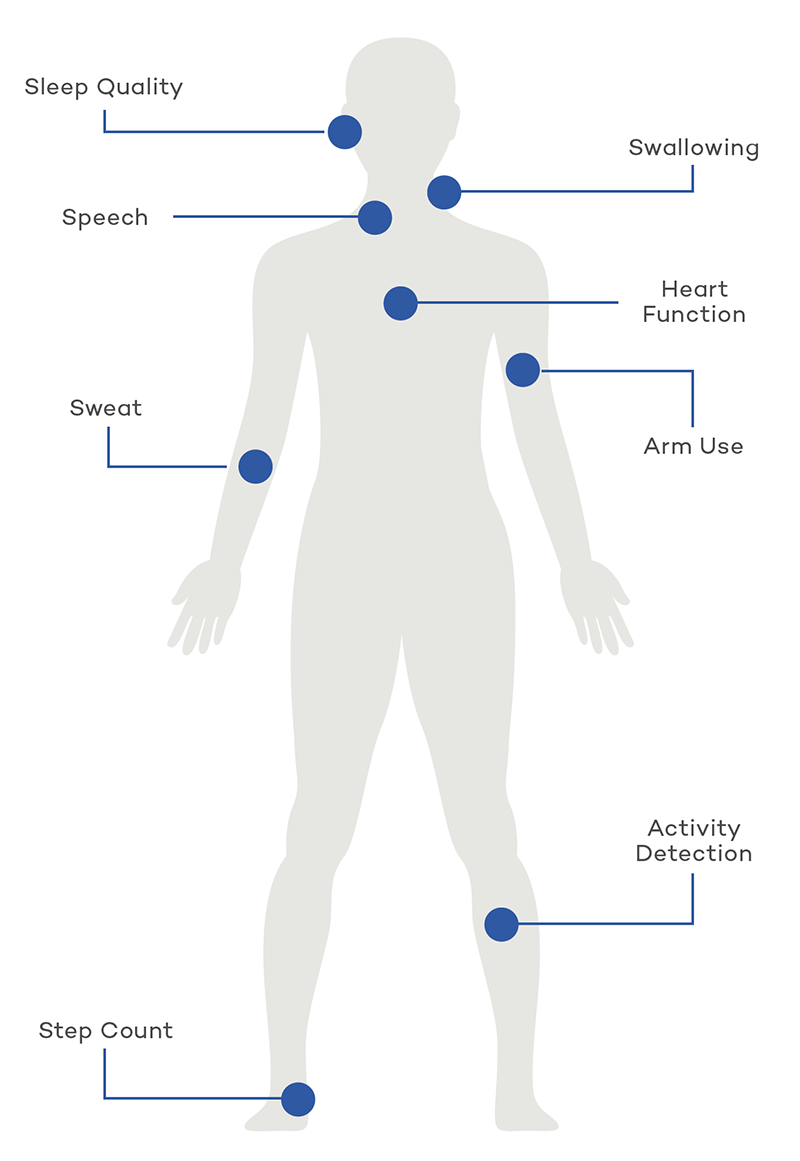 Monitors for the body: Sensors could be placed at multiple locations for a full-body picture of a stroke patient’s recovery

The throat sensor is just one in a portfolio of innovations developed in Northwestern’s Center for Bio-Integrated Electronics. There, Rogers and his collaborators have developed materials and design approaches that transform electronics from traditional rigid silicon circuits into soft, conforming, thin devices that integrate with the body while transmitting real-time information wirelessly to both physicians and machine-learning algorithms that can find new patterns within data.

Sometimes a device is developed for one purpose, only for investigators to find it has a second capacity. Rogers’s group originally developed the acoustic patch with the idea that it might be useful for a new kind of human-computer interface, but they pivoted after being approached by Leora Cherney, PhD, professor of Physical Medicine and Rehabilitation and a research scientist at the Shirley Ryan AbilityLab. She treats patients with aphasia, the loss of the ability to speak or understand speech after a stroke.

She asked if perhaps Rogers’s throat patch could measure patients’ total talk time and the cadence of their speech, giving therapists a better way of tracking patients’ rehabilitation.

It could, Rogers said. “The patch can track speech and speech patterns in a way that is completely immune to ambient noise,” he says. The team quickly realized the device could also measure swallowing. Dysphagia — difficulty swallowing — is another potentially difficult act that affects stroke patients’ quality of life.

“Once we understood that measuring speech and swallowing was important, we could go back and tailor the devices specifically to measure those processes,” he says. The project involved designing a flexible patch with a battery, radio and acoustic sensor that could stick to the soft part of the throat and, perhaps most importantly, be comfortable for the user.

“The patch had to be constructed so that people forget it’s there once they put it on,” Rogers says. “We strive on the engineering and materials side to make it fully skin-like and physically imperceptible.”

Once the patch was optimized for patients with aphasia and dysphagia, Rogers’s group looked to expand its platform with another Shirley Ryan AbilityLab investigator — one who, like Rogers, takes a multidisciplinary approach to solving problems. 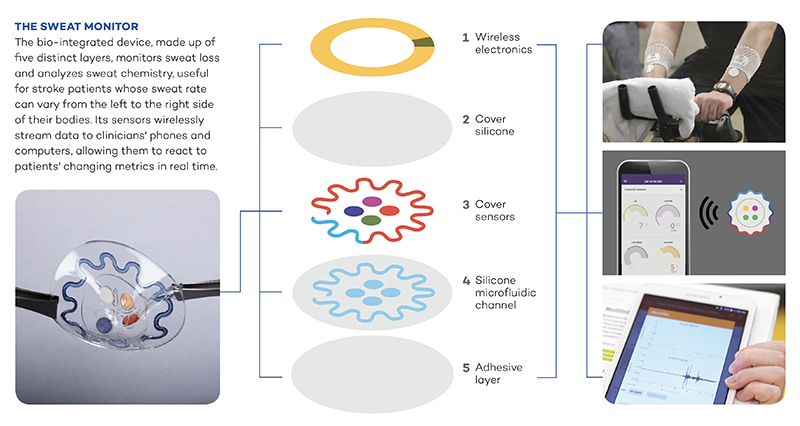 Arun Jayaraman’s space in the Shirley Ryan AbilityLab is the picture of translational medicine. The Max Näder Lab for Rehabilitation Technologies and Outcomes Research not only houses dozens of physical therapists, engineers, computer scientists, physicians and social psychologists, it also has machine shops for building new technologies and space for patients to test them out.

The group develops and optimizes next-generation technologies for people with disabilities. In the case of stroke, “early interventions are critical for long-term recovery,” says Jayaraman, who is also a professor of Medical Social Sciences and of Physical Therapy and Human Movement Sciences. His team works on more than 30 projects at a time, including prostheses, robotics and adaptive technologies.

“With every question you want to take a multidisciplinary approach,” he says. “Each discipline has a thought process on what might work. When you combine them, that’s when you get the best outcome possible.”

Before he met Rogers, Jayaraman tested new rehabilitative technologies — like a robotic leg that understands its user’s intent and then bends and moves like a real leg — and tracked patients’ responses with commercial sensors. But the sensors were optimized for healthy people, so when a patient with a restricted gait or a Parkinson’s tremor used them, the sensors couldn’t account for the different movements, and the resulting data was incorrect.

Rogers’s innovative sensors made it possible to detect behaviors on new locations on the body, like the throat, but Jayaraman also wondered if Rogers could provide a suite of sensors to give a full-body picture of a stroke patient’s recovery.

With feedback from Jayaraman, Rogers expanded the platform to include full-body motion kinematics. This new suite of sensors could be placed at multiple locations on the body to measure heart function, sleep quality, physical activity and muscle contractions. Jayaraman could also deploy Rogers’s sweat patch, which monitors sweat loss and analyzes sweat chemistry. This proves especially useful in stroke patients, whose sweat rate can vary from the left to the right side of their bodies.

Jayaraman’s team is now developing algorithms to translate data from the sensors and is creating a dashboard interface for physicians and therapists to see how patients’ data compares to that of healthy people. In the meantime, his patients are trying out the sensors at home.

“They don’t mind wearing them,” he says. “Once patients are discharged, we want them to get to a level where they can get back to their lives, back to work. Now we have the ability to monitor them to ensure their rehabilitation is on the right track.”

Working with physician-scientists at the Shirley Ryan AbilityLab has been key to making designs as useful as possible, Rogers says. “Being co-located and tightly coupled makes a tremendous difference.”

He hopes to continue improving the sensors while looking for more potential uses.

“Ultimately we would like to think of our research with the Shirley Ryan AbilityLab as a stepping stone to broader deployment,” Rogers says. “We want the technology to have widespread, positive societal impact.”

For example, he’s connecting with Northwestern Medicine speech pathologists to test the throat patch with their patients and working on a haptic interface that reminds people to swallow, moving the patch beyond diagnostics and into therapy.

Jayaraman, meanwhile, envisions Rogers’s sensors as key to the future of long-term care, especially for the elderly, who could benefit from unobtrusive remote monitoring that could allow them to keep living in their own homes. This could be a large market, considering the number of Americans ages 65 and over is projected to double to more than 98 million by 2060.

“The whole world is aging,” Jayaraman says. “If we are able to monitor the elderly at home, it could create a new care model.