Earlier this month, the surgical community lost one of the greats.

Dr. Denton Cooley was the first surgeon to perform an artificial heart implant. It was a landmark achievement met with great praise — but it also triggered a uniquely intense and public dispute with another surgeon that lasted for decades.

On the other side of the Cooley’s feud was Dr. Michael E. DeBakey, another pioneering cardiac surgeon who was considered by some to be the greatest ever. For a while he was also Cooley’s mentor and then partner — before they became bitter rivals.

According to a New York Times obituary for Cooley, during the time the two surgeons worked together, they developed techniques for surgery on heart and blood vessels that have been credited with saving thousands of lives. 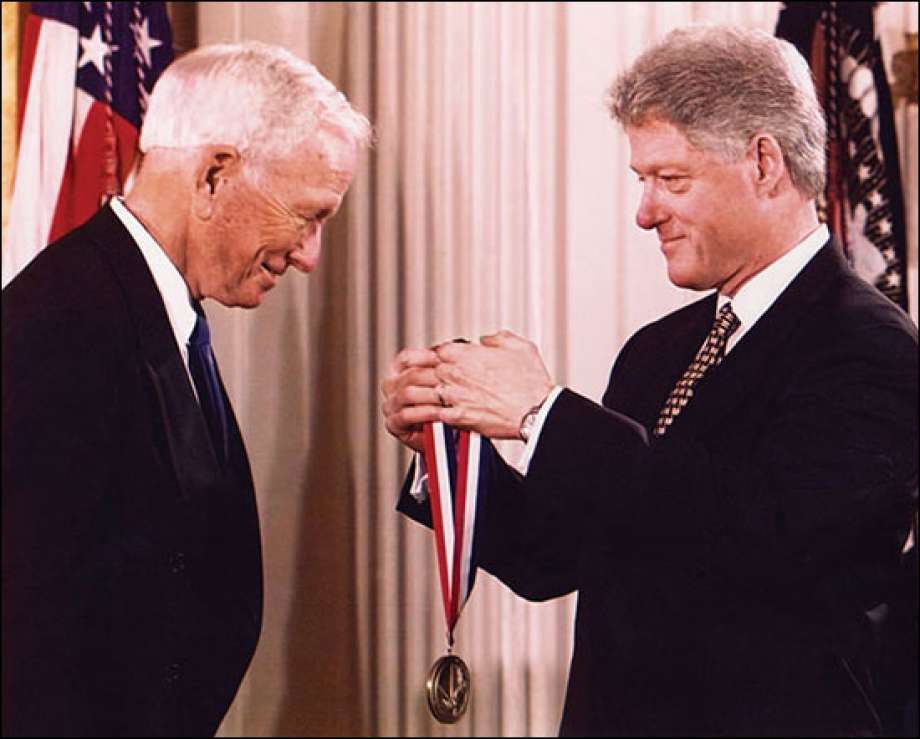 Denton Cooley receives the National Medal of Technology from Bill Clinton, in 1998. He was also awarded the Presidential Medal of Freedom by Ronald Reagan, in 1984. (Image credit: Texas Children’s Hospital)

Then in 1968, a surgeon in South Africa reportedly performed the first human heart transplant — a watershed moment that spurred other surgeons, including Cooley, to race toward accomplishing the same procedure.

DeBakey, meanwhile, was using a federal grant to work with a team to develop an artificial heart device that could be used to keep patients alive while they waited for a viable heart to be implanted. Although his team had successfully used the device in calves, he didn’t think it was ready to try on humans.

But in 1969, Cooley found an opportunity to try the device that he thought was too fitting to let pass. However, instead of getting permission from DeBakey to try the device, he had a member of DeBakey’s laboratory team deliver it — unauthorized — to him. Then, along with a 16-person team, Cooley implanted the device into the patient, whose heart was not able pump enough blood, during a three-hour surgery.

The patient survived for 64 hours until a donor heart was found and implanted by Cooley. (The patient, 47-year-old Haskell Karp, died 32 hours later from pneumonia.)

Cooley justified his brazen actions by saying it didn’t violate the terms of the grant funding the research for the device, and because he said it was the patient’s only shot at surviving.

But DeBakey, who died in 2008 at the age of 99, accused Cooley of pulling off a stunt to claim a medical “first.” Later, Cooley did acknowledge that he wanted to keep the Russians from being able to say they had implanted an artificial heart first.

After that, the Times reports that the pair couldn’t even stand being in the same room together. The rivalry between the two surgeons became so legendary that they were featured on the cover of Life magazine in 1970 under the headline, “A Bitter Feud: Two Great Surgeons at War Over The Human Heart.”

The feud didn’t overshadow the accomplishments of either doctor, however, and both left a lasting mark on the medical world.

Cooley was known as a towering figure in the OR who had a warm sense of humor and at one point was the busiest cardiovascular surgeon in the country. By the age of 50, he had completed more than 5,000 surgeries, including 17 transplants.

In 1962, Cooley founded the Texas Heart Institute at St. Luke’s. He was also a professor at several medical schools in Texas.

Cooley and DeBakey reportedly reconciled in 2007. Or at least, they shook hands warmly at a ceremony where Cooley passed DeBakey a lifetime achievement award from the Denton A. Cooley Cardiovascular Surgical Society.

Perhaps they had each other to thank, after all. The conflict had obviously motivated them both to reach greater heights in their field.

At Cooley’s memorial service earlier this month in Houston, Cooley’s son-in-law, who is also Texas Children’s Hospital’s cardiac surgeon-in-chief, noted that the 40-year-feud was “a competition, the competition that catalyzed the rapid development of heart surgery and established Houston and specifically the Texas Medical Center as the recognized epicenter of cardiovascular medicine.”