Never before have scientists been able to make scores of simultaneous genetic edits to an organism’s genome. But now in a landmark study by George Church, Ph.D., and his team at the Wyss Institute for Biologically Inspired Engineering at Harvard University and Harvard Medical School, the gene editing system known as “CRISPR–Cas9” has been used to genetically engineer pig DNA in 62 locations – an explosive leap forward in CRISPR’s capability when compared to its previous record maximum of just six simultaneous edits. The 62 edits were executed by the team to inactivate retroviruses found natively in the pig genome that have so far inhibited pig organs from being suitable for transplant in human patients. With the retroviruses safely removed via genetic engineering, however, the road is now open toward the possibility that humans could one day receive life–saving organ transplants from pigs.

Church is a Wyss Core Faculty member, the Robert Winthrop Professor of Genetics at Harvard Medical School (HMS) and Professor of Health Sciences and Technology at Harvard and MIT. The advance, reported by Church and his team including the study’s lead author Luhan Yang, Ph.D., a Postdoctoral Fellow at HMS and the Wyss Institute, was published in the October 11 issue of Science.

The concept of xenotransplantation, which is the transplant of an organ from one species to another, is nothing new. Researchers and clinicians have long hoped that one of the major challenges facing patients suffering from organ failure – which is the lack of available organs in the United States and worldwide – could be alleviated through the availability of suitable animal organs for transplant. Pigs in particular have been especially promising candidates due to their similar size and physiology to humans. In fact, pig heart valves are already commonly sterilized and de–cellularized for use repairing or replacing human heart valves. 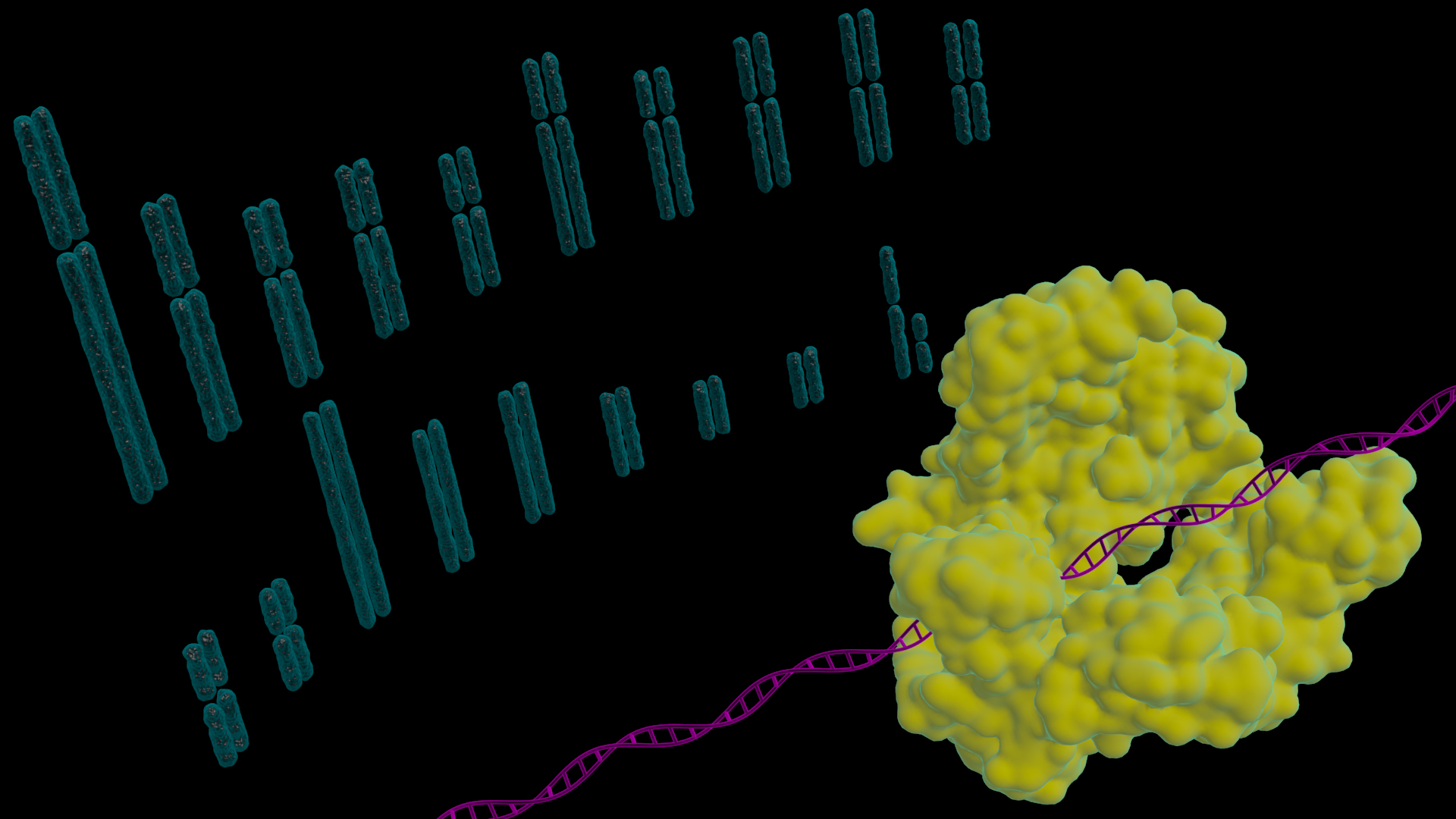 This artistic rendering shows pig chromosomes (background) which reside in the nucleus of pig cells and contain a single strand of RNA, and the Cas9 protein targeting DNA (foreground). The CRISPR–Cas9 gene editing system works like molecular scissors to precisely edit genes of interest. A new advance reported in Science by Wyss Core Faculty member George Church and his team used Cas9 to make 62 edits to the pig genome to remove latent retroviruses, presenting a solution to one of the largest safety concerns that has so far blocked progress in making pig organs compatible for xenotransplant in humans. (Credit: Wyss Institute at Harvard University)

But the transplant of whole, functional organs comprised of living cells and tissue constructs has presented a unique set of challenges for scientists. One of the primary problems has been the fact that most mammals including pigs contain repetitive, latent retrovirus fragments in their genomes – present in all their living cells – that are harmless to their native hosts but can cause disease in other species.

“The presence of this type of virus found in pigs – known as porcine endogenous retroviruses or PERVs – brought over a billion of dollars of pharmaceutical industry investments into developing xenotransplant methods to a standstill by the early 2000s,” said Church. “PERVs and the lack of ability to remove them from pig DNA was a real showstopper on what had been a promising stage set for xenotransplantation.”

Now – using CRISPR–Cas9 like a pair of molecular scissors – Church and his team have inactivated all 62 repetitive genes containing a PERV in pig DNA, surpassing a significant obstacle on the path to bringing xenotransplantation to clinical reality. With more than 120,000 patients currently in the United States awaiting transplant and less than 30,000 transplants on average occurring annually, xenotransplantation could give patients and clinicians an alternative in the future.

“Pig kidneys can already function experimentally for months in baboons, but concern about the potential risks of PERVs has posed a problem for the field of xenotransplantation for many years,” said David H. Sachs, M.D., Director of the TBRC Laboratories at Massachusetts General Hospital, Paul S. Russell Professor of Surgery Emeritus at Harvard Medical School, and Professor of Surgical Sciences at Columbia University’s Center for Translational Immunology. Sachs has been developing special pigs for xenotransplantation for more than 30 years and is currently collaborating with Church on further genetic modifications of his pigs. “If Church and his team are able to produce pigs from genetically engineered embryos lacking PERVs by the use of CRISPR-Cas9, they would eliminate an important potential safety concern facing this field.”

Yang says the team hopes eventually they can completely eliminate the risk that PERVs could cause disease in clinical xenotransplantation by using modified pig cells to clone a line of pigs that would have their PERV genes inactivated.

“This advance overcomes a major hurdle that has until now halted the progress of xenotransplantation research and development,” said Wyss Institute Founding Director Donald Ingber, M.D., Ph.D., who is also the Judah Folkman Professor of Vascular Biology at Harvard Medical School and Professor of Bioengineering at the Harvard John A. Paulson School of Engineering and Applied Sciences. “The real value and potential impact is in the number of lives that could be saved if we can one day use xenotransplants to close the huge gap between the number of available functional organs and the number of people who desperately need them.”

The remarkable and newly demonstrated capability for CRISPR to edit tens of repetitive genes such as PERVs will also unlock new ways for scientists to study and understand repetitive regions in the genome, which has been estimated to comprise more than two–thirds of our own human genome.