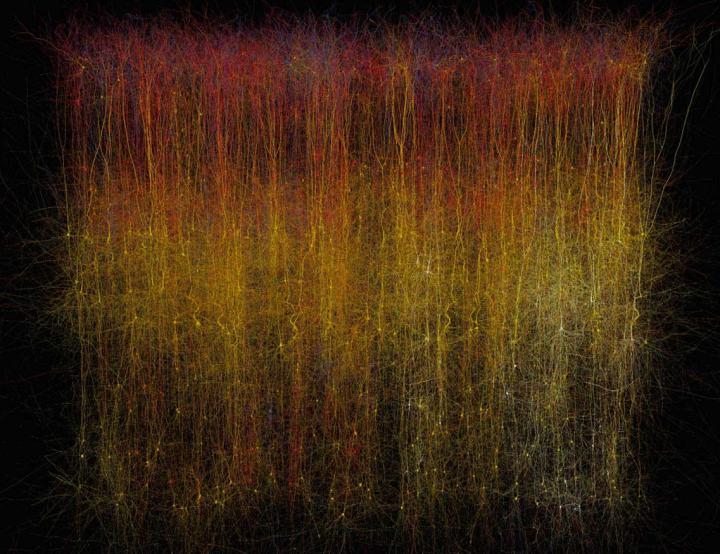 If you want to learn how something works, one strategy is to take it apart and put it back together again. For 10 years, a global initiative called the Blue Brain Project–hosted at the Ecole Polytechnique Federale de Lausanne (EPFL)–has been attempting to do this digitally with a section of juvenile rat brain. The project presents a first draft of this reconstruction, which contains over 31,000 neurons, 55 layers of cells, and 207 different neuron subtypes, on October 8 inCell.

Heroic efforts are currently being made to define all the different types of neurons in the brain, to measure their electrical firing properties, and to map out the circuits that connect them to one another. These painstaking efforts are giving us a glimpse into the building blocks and logic of brain wiring. However, getting a full, high-resolution picture of all the features and activity of the neurons within a brain region and the circuit-level behaviors of these neurons is a major challenge.

Henry Markram and colleagues have taken an engineering approach to this question by digitally reconstructing a slice of the neocortex, an area of the brain that has benefitted from extensive characterization. Using this wealth of data, they built a virtual brain slice representing the different neuron types present in this region and the key features controlling their firing and, most notably, modeling their connectivity, including nearly 40 million synapses and 2,000 connections between each brain cell type.

“The reconstruction required an enormous number of experiments,” says Markram, of the EPFL. “It paves the way for predicting the location, numbers, and even the amount of ion currents flowing through all 40 million synapses.”

Once the reconstruction was complete, the investigators used powerful supercomputers to simulate the behavior of neurons under different conditions. Remarkably, the researchers found that, by slightly adjusting just one parameter, the level of calcium ions, they could produce broader patterns of circuit-level activity that could not be predicted based on features of the individual neurons. For instance, slow synchronous waves of neuronal activity, which have been observed in the brain during sleep, were triggered in their simulations, suggesting that neural circuits may be able to switch into different “states” that could underlie important behaviors.

“An analogy would be a computer processer that can reconfigure to focus on certain tasks,” Markram says. “The experiments suggest the existence of a spectrum of states, so this raises new types of questions, such as ‘what if you’re stuck in the wrong state?'” For instance, Markram suggests that the findings may open up new avenues for explaining how initiating the fight-or-flight response through the adrenocorticotropic hormone yields tunnel vision and aggression.

The Blue Brain Project researchers plan to continue exploring the state-dependent computational theory while improving the model they’ve built. All of the results to date are now freely available to the scientific community at https://bbp.epfl.ch/nmc-portal.