Freezing bacteria super fast to gain a true-to-nature image of the internal and external structure. Ariane Briegel Professor of Ultrastructural Biology came to Leiden specially to carry out this research.

Leiden University is one of the few institutes in the world to have the necessary equipment.

“Microbes like bacteria are all around us, but they are too small to see. That’s why we know so little about them,” Briegel explains. Her field, ultrastructural biology, focuses on studying biological specimens with high-resolution imaging techniques. Briegel works mainly with highly advanced cryo-electron tomography. “We freeze the bacteria super fast – a true flash-freeze – so that the specimen is contained in perfectly clear ice,” she explains. It’s so fast that the water in the cell has no time to crystallise. “The bacteria remains completely intact and there are no defects in the image.” 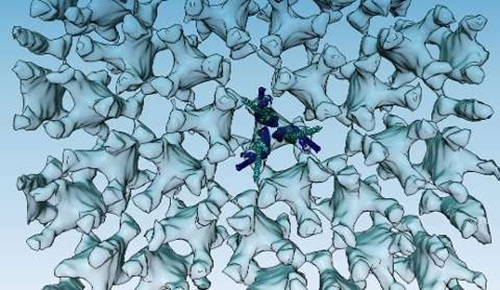 Bacteria in their natural state

The specimen is then placed under an advanced electron microscope, where it is spun round. Briegel: “Then we make 2D recordings from all angles, from inside and outside, like stickers. By putting all these together we can build up a 3-D image of the bacterium. The process is called tomography, the same technique that’s used in hospitals, when patients are put into a scanner.” The combination of these techniques offers a completely new vision of the world of microbes. “Cryo-electron tomography is the first technique for looking at bacteria in their natural state, exactly how they normally look.”

Leiden University has two of the most advanced microscopes for electron tomography, in the Netherlands Center for Electron Nanoscopy (NeCEN) that is part of the Institute for Biology. It is the only facility for this technique in the Netherlands, and there are just seven institutes in the world that have this equipment. This was a unique opportunity and a very important reason for Briegel to come to Leiden University. “This is the first method in the field of biology that allows us to see the structure, the exterior and all the internal workings of microbes. We hope it will help us find out more about bacteria: how they grow, how they reproduce, how they move,” Briegel comments.

The ‘nose’ of bacteria

One of the first subjects Briegel will focus on is the movement of microbes. Bacteria use signals from their environment, like the presence or absence of particular chemical substances, to determine where they need to go, for food, for example. “We’ve known about this process, called chemotaxis, for decades,” she explains. “What we don’t know is which structures the bacteria use to detect the signals. Or: what does the ‘nose’ of bacteria look like?” It’s made up of thousands of very sensitive receptors arranged in a herringbone pattern on the outside of the bacterium. “Now we also want to know what the ‘nose’ of pathogenic bacteria, like the cholera bacterium, looks like. Once we have a clear idea of how bacteria ‘sense’ where they need to go, that will probably give us some cues for how to prevent infections.”

In her inaugural lecture Briegel also makes a firm stand for fundamental research. “The tendency is primarily to do or finance research that will generate immediate results, like medicines or industrial applications. I do understand why the focus is on these things, but fundamental research shouldn’t suffer as a result.” She relates it to her own work. By gathering all kinds of basic information about bacteria – what they look like, how they move – it may be possible to develop new ways of preventing infections. Highly useful, given the increase in antibiotic-resistant bacteria and the fact that the opportunities for further developing current antibiotics are almost exhausted. “But it is possible if we have an image of the basic component, the bacterium. If research funding only goes to research that is expected to deliver immediate results, that’s like putting blinkers on researchers. Then you never know what you are missing.”