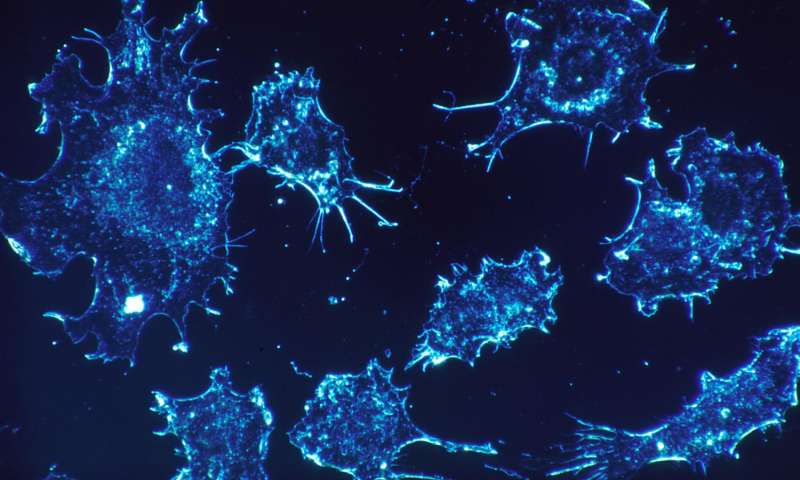 A Mayo Clinic research team has developed a new type of cancer-fighting nanoparticle aimed at shrinking breast cancer tumors, while also preventing recurrence of the disease. In the study, published today in Nature Nanotechnology, mice that received an injection with the nanoparticle showed a 70 to 80 percent reduction in tumor size. Most significantly, mice treated with these nanoparticles showed resistance to future tumor recurrence, even when exposed to cancer cells a month later.

The results show that the newly designed nanoparticle produced potent anti-tumor immune responses to HER2-positive breast cancers. Breast cancers with higher levels of HER2 protein are known to grow aggressively and spread more quickly than those without the mutation.

“In this proof-of-concept study, we were astounded to find that the animals treated with these nanoparticles showed a lasting anti-cancer effect,” says Betty Y.S. Kim, M.D., Ph.D., principal investigator, and a neurosurgeon and neuroscientist who specializes in brain tumors at Mayo Clinic’s Florida campus. “Unlike existing cancer immunotherapies that target only a portion of the immune system, our custom-designed nanomaterials actively engage the entire immune system to kill cancer cells, prompting the body to create its own memory system to minimize tumor recurrence. These nanomedicines can be expanded to target different types of cancer and other human diseases, including neurovascular and neurodegenerative disorders.”

Dr. Kim’s team developed the nanoparticle, which she has named “Multivalent Bi-specific Nano-Bioconjugate Engager,” a patented technology with Mayo Clinic Ventures, a commercialization arm of Mayo Clinic. It’s coated with antibodies that target the HER2 receptor, a common molecule found on 40 percent of breast cancers. It’s also coated with molecules that engage two distinct facets of the body’s immune system. The nanoparticle hones in on the tumor by recognizing HER2 and then helps the immune cells identify the tumor cells to attack them.

The molecules attached to the nanoparticle rev up the body’s nonspecific, clean-up cells (known as macrophages and phagocytes) in the immune system that engulf and destroy any foreign material. The design of the nanoparticle prompts these cells to appear in abundance and clear up abnormal cancer cells. These clean-up cells then relay information about the cancer cells to highly specialized T-cells in the immune system that help eradicate remaining cancer cells, while maintaining a memory of these cells to prevent cancer recurrence. It’s the establishment of disease-fighting memory in the cells that makes the nanoparticle similar to a cancer vaccine. Ultimately, the body’s own cells become capable of recognizing and destroying recurrent tumors.

Since the late 1990s, the field of nanomedicine has focused on developing nanoparticles as simple drug delivery vehicles that can propel chemotherapy drugs to tumors. One pitfall is that the body tends to purge the particles before they reach their destination.

“Our study represents a novel concept of designing nanomedicine that can actively interact with the immune cells in our body and modulate their functions to treat human diseases,” says Dr. Kim. “It builds on recent developments in cancer immunotherapy, which have been successful in treating some types of tumors; however, most immunotherapy developed so far does not harness the power of the entire immune system. We’ve developed a new platform that reaches tumor cells and also recruits abundant clean-up cells for a fully potent immune response.”

Future studies in the lab will explore the ability of the nanoparticle to prevent long-term recurrence of tumors, including metastases at sites distant from the primary tumor. What’s more, the nanoparticle is designed to be modular, meaning it can carry molecules to fight other types of disease. “This approach hopefully will open new doors in the design of new nanomedicine-based immunotherapies,” she says.