A WSU research team has successfully used a mild electric current to take on and beat drug-resistant bacterial infections, a technology that may eventually be used to treat chronic wound infections.

The researchers report on their work in the online edition of npj Biofilms and Microbiomes.

Led by Haluk Beyenal, Paul Hohenschuh Distinguished Professor in the Gene and Linda Voiland School of Chemical Engineering and Bioengineering, the research team used an antibiotic in combination with the electric current to kill all of the highly persistent Pseudomonas aeruginosa PAO1 bacteria in their samples. The bacteria is responsible for chronic and serious infections in people with lung diseases, such as cystic fibrosis, and in chronic wounds. It also often causes pneumonia for people who are on ventilators and infections in burn victims.

“I didn’t believe it. Killing most of the persister cells was unexpected,” said Beyenal, when he first saw the results. “Then we replicated it many, many times.” 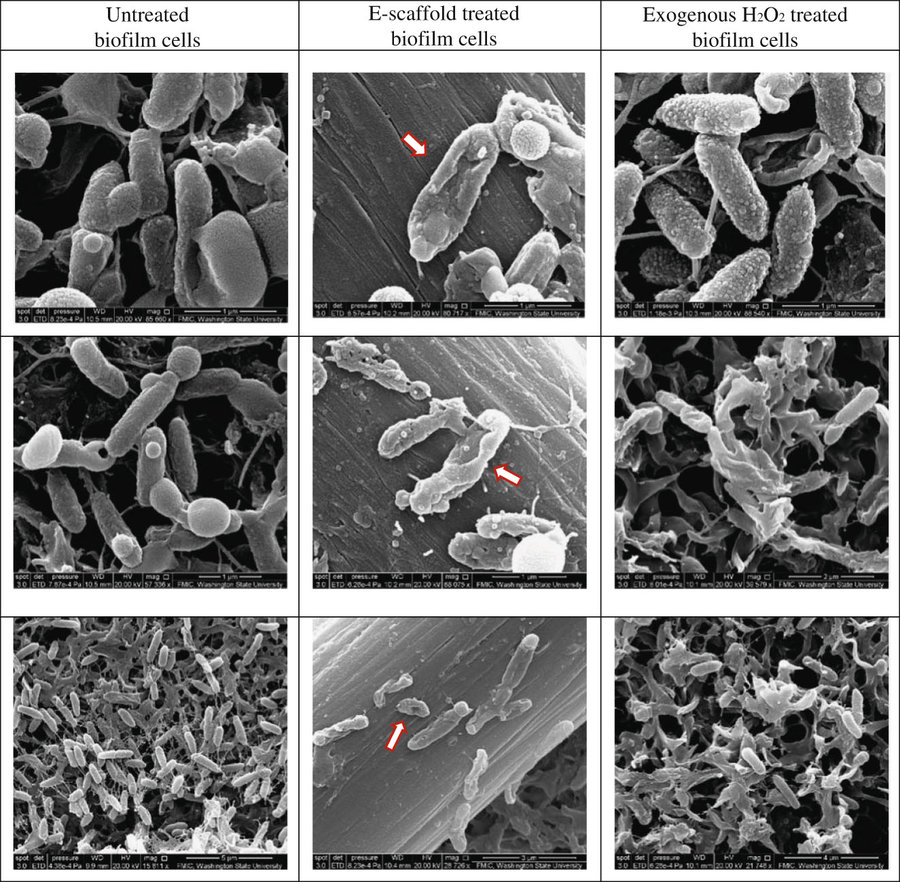 Bacterial resistance is a growing problem around the world. While antibiotics were a miracle drug of the 20th century, their widespread use has led to drug-resistant strains. In the U.S. at least two million infections and 23,000 deaths are now attributable to antibiotic-resistant bacteria each year, according to the Centers for Disease Control.

When doctors use antibiotics to treat a bacterial infection, many of the bacteria die. Bacteria that form a slime layer (called a biofilm), however, are more difficult to kill because antibiotics only partially penetrate this protective layer. Subpopulations of “persister” cells survive treatment and are able to grow and multiply, resulting in chronic infections.

In the new study, the researchers used an “e-scaffold,” a sort of electronic band-aid made out of conductive carbon fabric, along with an antibiotic to specifically tackle these persister cells. The e-scaffold creates an electrical current that produces a low and constant concentration of hydrogen peroxide, an effective disinfectant, at the e-scaffold surface. The hydrogen peroxide disrupts the biofilm matrix, damages the bacterial cell walls and DNA, allowing better antibiotic penetration and efficacy against the bacteria.

“It turns out the hydrogen peroxide is really hard on biofilms,” says Doug Call, a professor in the Paul Allen School of Global Animal Health and co-author on the paper.

Researchers have tried electrical stimulation as a method to kill bacteria for more than a century but with only mixed results. Beyenal’s team determined the conditions necessary for the electrochemical reaction to produce hydrogen peroxide. The current has to be carefully controlled, however, to assure the correct reaction at an exact rate. Their method also does not damage surrounding tissue, and the bacteria are unable to develop resistance to such an electrochemical treatment.

“We pushed past the observation and got to the mechanism,” says Call. “If you can explain why it works, then you can move forward, describe the limitations, and hopefully augment the effect.”

The researchers have filed a patent application and are working to commercialize the process. Already several companies have contacted WSU to discuss commercialization. They also hope to begin conducting clinical tests.

Similar to the way that penicillin was discovered by accident, the research to develop the e-scaffold actually came out of Beyenal’s group’s failed attempt to improve fuel cells, he said. When the researchers figured out they could only produce a small amount of electric current for their fuel cell cathode, they decided to see if they could use the process for a different purpose.

“As engineers, we are always trying to find solutions to a problem, so we decided to use bad cathodes to control biofilm growth, and it worked. Our inspiration came from the fundamental work to understand its mechanism” he says.