Researchers in Ireland have developed a highly sensitive, flexible, graphene-based sensing technology that they say may transform wearable medical devices.

Led by nanoscientist Jonathan Coleman, head of the School of Physics at Trinity, they developed a method to formulate G‐Putty‐based inks that can be printed as a thin-film onto elastic substrates, including Band-Aids, and attached easily to the skin. Creating and testing inks of different viscosities, the team found that they could tailor G-Putty inks according to printing technology and application. The results of their study appeared in the journal Small this week.

In medical settings, strain sensors are a highly valuable diagnostic tool used to measure changes in mechanical strain such as pulse rate, or the changes in a stroke patient’s ability to swallow. A strain sensor works by detecting this mechanical change and converting it into a proportional electrical signal, thereby acting as a mechanical-electrical converter. The strain sensors that are available on the market are mostly made from metal foil that poses limitations in terms of wearability, versatility and sensitivity.

The researchers estimate that their printed sensors are 50 times more sensitive than the industry standard and outperform other comparable nano-enabled sensors in flexibility.

“My team and I have previously created nanocomposites of graphene with polymers like those found in rubberbands and Silly Putty,” Coleman said in a news release. “We have now turned G-Putty, our highly malleable graphene blended Silly Putty, into an ink blend that has excellent mechanical and electrical properties. Our inks have the advantage that they can be turned into a working device using industrial printing methods, from screen printing to aerosol and mechanical deposition. An additional benefit of our very low-cost system is that we can control a variety of different parameters during the manufacturing process, which gives us the ability to tune the sensitivity of our material for specific applications calling for detection of really minute strains”.

The team is working on translating their scientific work into a product, according to the release.

“The development of these sensors represents a considerable step forward for the area of wearable diagnostic devices — devices which can be printed in custom patterns and be comfortably mounted to a patient’s skin to monitor a range of different biological processes,” said Trinity physics professor Daniel O’Driscoll. “We’re currently exploring applications to monitor real-time breathing and pulse, joint motion and gait, and early labor in pregnancy. Because our sensors combine high sensitivity, stability and a large sensing range with the ability to print bespoke patterns onto flexible, wearable substrates, we can tailor the sensor to the application. The methods used to produce these devices are low cost and easily scalable — essential criteria for producing a diagnostic device for wide-scale use”.

Coleman recently won a European Research Council proof of concept grant to develop a prototype for a commercial product, according to the college. 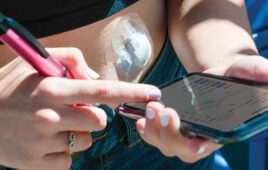