Researchers estimate that up to 10,000 rectal cancer patients undergo unnecessary surgery, and more than 25,000 suffer from pelvic sepsis, wound infection and permanent impairments from aggressive surgery in the United States annually.

That’s because it’s difficult to reliably tell which patients treated with chemotherapy and radiation still need surgery. Another challenge is surgeons lack strong guidance on just how much tissue beyond the cancerous tumor they should remove.

A researcher at Case Western Reserve University aims to provide answers to both uncertainties by analyzing features found in magnetic resonance images regularly taken before surgery and pathological specimens removed during surgery. 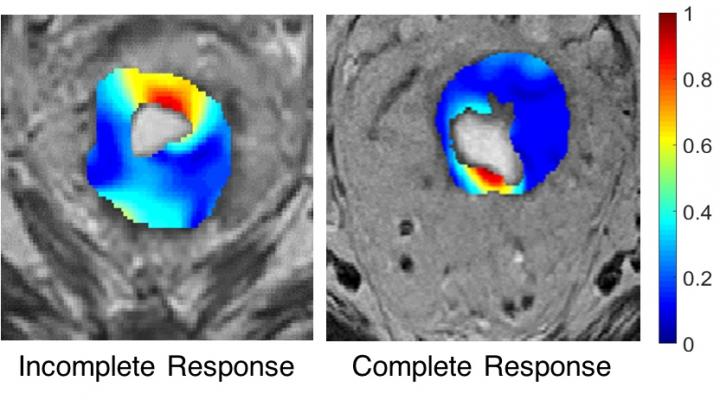 The post-chemoradiation image of rectal cancer on the left shows residual cancer that requires surgery. The image on the right shows no signs of residual cancer. (Credit: Case Western Reserve University)

The features are too small to be seen by the human eye, but can be measured with computers. When associated with the known outcomes of past patients, the features may be used to make risk assessments and surgical maps for new patients.

“Because we have access to the images and the pathology, we can create accurate maps of residual disease,” said Satish Viswanath, research assistant professor in biomedical engineering and member of the Center for Computational Imaging and Personalized Diagnostics (CCIPD) at Case Western Reserve. “These analytics can be used as a guide for the surgical margins–a GPS for surgeons.”

Viswanath has received a $569,000, three-year grant from the Department of Defense to fund the project.

While obviously not limited to those who serve in the military, colorectal cancer is the third most common cancer among veterans and active duty military personnel.

By mining the images and data, Viswanath and co-investigators aim to learn which features, such as textures associated with lesions or fibrosis, are associated with residual disease.

The researchers will co-register, or align and fuse, the post-chemoradiation MR images with post-surgery pathology images. They will then try to determine which features on MRI are associated with patients’ outcomes–whether the cancer returned, they suffered incontinence or other impairments, or they beat the disease with little collateral damage with or without surgery.

Researchers will develop a risk-assessment scoring system based on those associations. The score will help doctors determine which patients need surgery after chemotherapy and radiation treatments and which don’t.

For those who need surgery, the associations will be used to define the boundaries. The goal is to remove enough tissue to prevent recurrence of cancer, but no more. Researchers believe that will reduce metastasis and also the number of impairments caused by overly aggressive surgery.

The researchers will use post-chemoradiation images and pathology specimens from University Hospitals Case Medical Center to develop the surgical GPS and risk scores. They will validate the tools using images and pathology outcomes and assessments from the Stokes Cleveland VA.