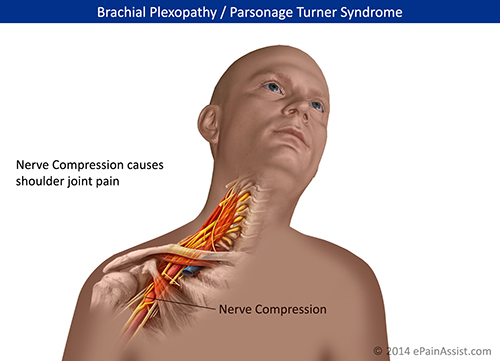 A recent study estimates that PTS affects approximately 1 in 1,000 people annually, which is 30-50 times more than previously estimated.

The majority of patients recover on their own, but those who don’t are afflicted with permanent partial loss of use of their arm. There is a lot of uncertainty around this syndrome, as the cause is unknown and each case is different. It occurs spontaneously in otherwise healthy people typically under 50 years of age, with men three times more likely to experience the condition.

“With exciting new MRI and ultrasound imaging protocols, we have identified tiny twists or ‘hourglass’ constrictions inside nerves that were previously healthy, allowing us to diagnose patients more quickly and predict those who may not recover,” said Dr. Scott Wolfe, chief emeritus of Hand and Upper Extremity Service at HSS. “In order to save the affected muscle, we’ve identified surgical techniques that release the nerve and restore function in a matter of months.”

“We are looking to determine what’s different about the patients who have the ability to recover,” said Dr. Steve Lee, research director of the Center for Brachial Plexus and Traumatic Nerve Injury at HSS. “Gathering this data will give answers to patients who may be living with partial paralysis and no medical hope.”

Typically, Parsonage-Turner Syndrome is a diagnosis of exclusion as there’s no blood test or biomarker to categorically conclude a patient has PTS. As a result, PTS is often misdiagnosed. The muscles and nerves involved are usually not part of standard diagnostic testing.

“Now that we’ve identified these smaller nerves and can reliably identify abnormalities with MRI, we want to find out why they occur, what they represent in the context of recovery and ultimately how they should be treated,” said Dr. Darryl Sneag, radiologist at HSS.

“Diagnosing patients correctly and sooner is better for all parties,” added Dr. Joseph Feinberg, medical director of the Center for Brachial Plexus and Traumatic Nerve Injury and chief emeritus of Physiatry at HSS. “Electrodiagnostic testing (EMG) helps us accurately diagnose patients and allow us to prognosticate outcome and better direct care. The patient will have peace of mind and can avoid unnecessary extensive testing, which ultimately equates to lower healthcare costs.”