A hard hit to the head typically prompts physicians to look for signs of a concussion based on symptoms such as forgetfulness, wobbly gait and disorientation.

But symptoms such as those are subjective. And youth who are anxious to get back to their sport can sometimes hide the signs in order to brush off adult concerns, says physiologist Sushmita Purkayastha, Southern Methodist University, Dallas.

Now a new study funded by the Texas Institute for Brain Injury and Repair at U.T. Southwestern Medical Center, Dallas aims to find noninvasive objective indicators to diagnose whether an athlete has suffered a concussion. Using transcranial Doppler ultrasound, the study will probe the brains of college athletes to measure blood vessel function in the brain, looking for tell-tale signs related to blood flow that help diagnose concussion, said Purkayastha, a researcher on the new study. 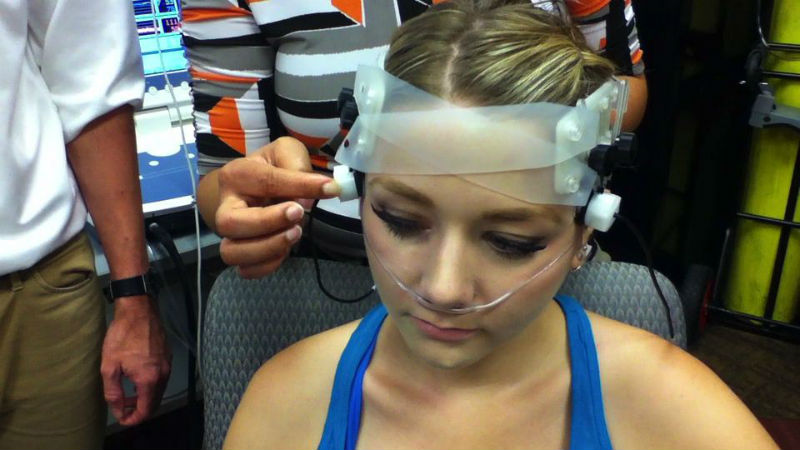 Physiologist Dr. Sushmita Purkayashta, a professor at Southern Methodist University, Dallas, explains her new study in which she and a team at Texas Institute for Brain Injury and Repair at U.T. Southwestern Medical Center, Dallas, probe for a biomarker that will provide an objective method for diagnosing concussion. Purkayashta demonstrates the test on a volunteer. (Credit: SMU)

“We know this is an understudied area. With other health problems, when the doctor suspects diabetes or hypertension, they don’t guess, they run objective tests to confirm the diagnosis. But that’s not the case with concussion—yet,” said Purkayastha, whose research expertise is blood flow regulation in the human brain. “That’s why my research focus is to find markers that are objective and not subjective. And this method of monitoring blood flow in the brain with ultrasound is noninvasive, inexpensive and there’s no radiation.”

Purkayastha and others on the research team are working under a one-year, $150,000 pilot research grant from the Texas Institute for Brain Injury and Repair, a UT Southwestern initiative funded by the Texas Legislature to enhance the diagnosis and treatment of brain injuries.

The researchers began testing subjects in August. They expect to have results by the Fall of 2017.

“We are very excited at establishing this collaboration between SMU and the Physical Medicine and Rehabilitation Department at UTSW. Our work with Dr. Purkayastha promises to give meaningful insight into the role of cerebral blood flow mechanisms after concussion and will point us in the right direction for improved neurorecovery,” said physician Kathleen Bell, a leading investigator at U.T. Southwestern’s Texas Institute for Brain Injury and Repair and principal investigator on the study. Bell is a nationally recognized leader in rehabilitation medicine and a specialist in neurorehabilitation.

Diagnosing concussions by using objective, non-invasive and inexpensive markers will result in accurate diagnosis and better return-to-play decisions following a concussion, thereby preventing the long-term risk of second-impact syndrome, said Purkayastha, an assistant professor in the Department of Applied Physiology and Wellness of SMU’s Annette Caldwell Simmons School of Education and Human Development.

“Although sports-related concussions are common, the physiology of the injury is poorly understood, and hence there are limited treatments currently available,” she said.

While the brain is the most important organ in the body, it has been very understudied, said Purkayastha. But since blood vessels in the brain behave similarly to those in the rest of the body, it’s possible to measure blood vessel function in the brain by monitoring blood pressure and brain blood flow. Observing those functions could reveal a marker, she said.

In Purkayastha’s lab on the SMU campus, student athletes are being outfitted with two small ultrasound probes, one on each side of their forehead in the temple area, to test blood vessel function. Specifically, the two probes monitor the blood flow through middle cerebral artery, which supplies blood to 75 percent of the brain. The artery traverses the brain, circulating blood to the brain tissues responsible for movement, cognition and decision-making.

Branching from the middle cerebral artery is a network of blood vessels that get smaller and smaller as they get further from the artery, spreading like tree branches through the brain. The smallest vessels—via a different local regulatory mechanism—maintain constant blood flow to the brain, making microadjustments, such as constricting and dilating in the face of constant changes in blood pressure. Adjustments occur as a person’s muscles move, whether standing, sitting, exercising, or even just laughing and experiencing emotion. These continual adjustments in the vessels—called cerebral autoregulation—keep blood flow constant and regular. That prevents problems such as hemorrhaging or passing out from large fluctuations in blood pressure that is either too high or too low.

In the current study, ultrasound probes on the temples record the vessels’ microadjustments as digital data. That information is processed through a WinDaq data acquisition software and analyzed to examine cerebral autoregulation with spontaneous changes in blood pressure during that period of time.

Unlike at the doctor’s office, when a cuff is used to measure blood pressure at a rate of single measurements during 30 seconds, Purkayastha’s ultrasound monitoring of blood pressure provides continuous blood pressure recording throughout each heartbeat. As sound waves bounce into the artery and send back an echo, they measure the speed of red blood cells and other blood components moving through the artery.

“We collect 10 minutes of very high frequency data points collecting information on beat-to-beat changes in blood pressure and blood flow to the brain for every single heartbeat,” said Purkayastha. “Then we analyze and post-process and examine how well the blood vessels were able to maintain constant blood flow to the brain. We suspect in people with concussion that the autoregulation function isn’t operating properly which leads to impairments in function such as wobbly gait, disorientation or forgetfulness. This is a noninvasive way to see if there’s a flaw in the autoregulation.”

Athletes with confirmed diagnosis of concussions will be tested three times during the course of the study. The first test is three days after a suspected concussion, the second is 21 days afterward, and the third is three months afterward.

“The pilot studies so far look promising and our goal is to better understand the mechanism behind injury and design objective markers detecting concussion,” said Purkayastha.

Purkayastha reported on the transcranial Doppler ultrasound technique and its application in Seminars in Neurology, http://www.ncbi.nlm.nih.gov/pubmed/23361485.