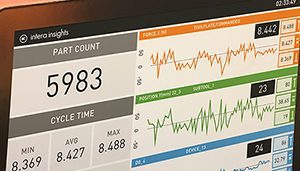 Rethink Robotics is touting a value-add to its Sawyer manufacturing robots: a new feature called Intera Insights that displays key performance indicators (KPIs) on a customizable on-robot display, as well as on smart devices on the same network.

“Instead of just having it be ones and zeros — discreet signals — we’re actually going to package it up and turn into something useful like uptime and runtime, an average cycle time — all those kinds of things that manufacturers can use to better optimize the process and be a little bit more efficient,” Chris Harbert, Rethink’s VP of sales for North America, told Medical Design & Outsourcing last week at MD&M West in Anaheim, Calif.

The Intera 5.2 software expansion, announced in November 2017, is meant to give operators and line managers valuable data at a glance from Sawyer.

Whether it’s Rethink or others, making sure the data is actionable for manufacturers is the next step, Harbert said.

A manufacturer, for example, might figure out through the data that a bottle filler station is slowing down the line downstream. Or perhaps the factory floor layout is placing one line at a disadvantage over another when it comes to delivery of needed parts.

“The real magic comes with, ‘What are you going to do with that?’ … How do you integrate Sawyer’s data into performance data … discreet actions. How do you improve that right now?”