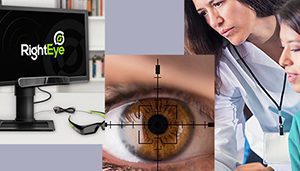 Eyecare company VSP Global said today that it has made an investment in RightEye and its game-based vision tests.

VSP (Rancho Cordova, Calif.) did not disclose the amount it provided RightEye (Bethesda, Md.) in the Series A round. But an SEC Form D that RightEye filed in June shows a roughly $7.3 million money-raise, which a spokesperson for VSP confirmed included both the Series A round and a convertible note round from key angel investors.

The investment is part of a number of efforts at VSP Global’s innovation lab, The Shop, that are meant to test and identify new tools and opportunities for independent optometry. Under the investment agreement, VSP will have a seat on RightEye’s board, and The Shop and RightEye will conduct ethnographic research with VSP network doctors to identify potential product pathways.

Founded in 2012, RightEye has vision tests that require users to follow graphics on a screen. They do everything from tracking a dot around a circle to fighting an alien invasion. RightEye’s cloud-based software is then able to interpret the interactions and quickly generate a report with details including visual speed and accuracy, visual processing, depth perception and dry eye.

“We know patients seek out doctors in private practice optometry for an eye exam because of the personalized, high-quality care they receive. We also know that VSP network doctors are interested in technology that could lead to better patient engagement and retention,” VSP global board member Matthew Alpert, OD, said in a news release.

“A tool like RightEye creates an opportunity to further strengthen that doctor-patient experience, while continuing to underscore the value that eye care plays in an individual’s life,” Alpert said.

“We look forward to working closely with VSP to bring our solutions for vision testing and training to a broad base of the vision care and pediatric communities,” said Adam Gross, RightEye’s CEO and co-founder. “We’re excited to offer independent eye care providers additional tools to consider that have the potential to enhance service to patients and grow their practices.”