A team of biomedical engineers and physical therapists at the University of Oklahoma have constructed a motorized device to assist infants at risk for cerebral palsy develop motor and cognitive skills.

The device, in its third iteration, is called the Self-Imitated Prone Progression Crawler (SIPPC). It’s a soft pad that rolls along on three wheels and includes a sensor-studded outfit that the infant wears. The onesie is equipped with 12 sensors that measure the child’s movement fifty times a second, converting their movement in 3-D on a computer screen. Cameras mounted on the SIPPC capture what each of the infant’s limbs does at a given time.

The idea for the device came from Thubi Kolobe, a physical therapist and researcher, who used her early research with babies born prematurely to think up the SIPPC as a concept. She collaborated with several professors at the University of Oklahoma, including David Miller, professor of Aerospace and Mechanical Engineering, to construct the device. 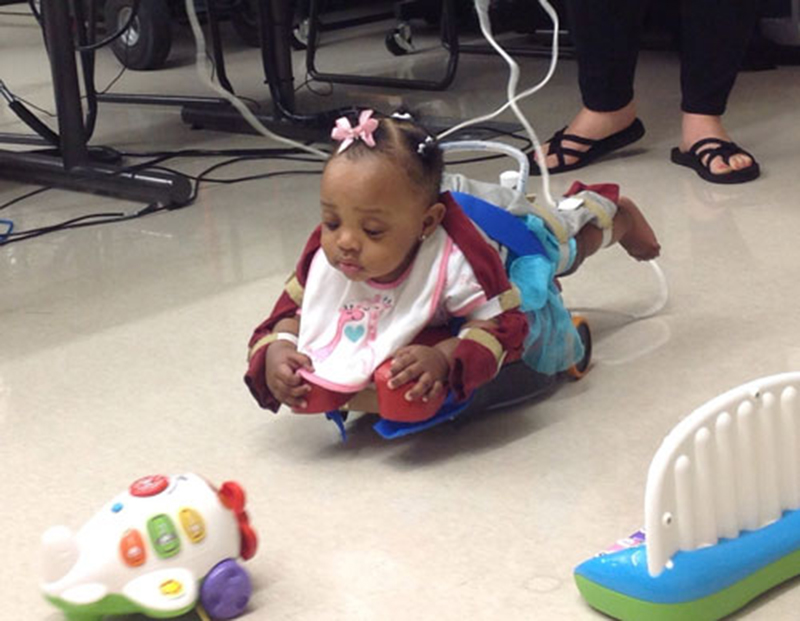 An infant using the SIPPC. (Credit: University of Oklahoma)

With this current version of the SIPPC, the device can adjust an infant’s distant from the ground to help their crawling and movements. The SIPPC also includes a cap with dozens of small, EEG electrodes for detecting brain activity as the infant moves around.

“The SIPPC suit allows us to capture even the tiniest movements made by the babies and help reward those with robotic movement,” said Andrew Fagg, Ph.D., associate professor of Computer Science and Bioengineering at the University of Oklahoma and one of the people involved in the design of the SIPPC.

Cerebral palsy is a neurological condition that affects movement and muscle coordination. It’s not usually diagnosed until a child reaches their first birthday, though early intervention could improve a child’s capabilities.

A study, funded by the National Science Foundation’s National Robotics Initiative, has begun involving 56 infants between the ages of four and eight months. The electrodes cap will be used during the study to see if there is a measurable change in brain activity over time of using the SIPPC.

The study will continue for another six to nine months before the team goes through the thousands of gigabytes of data collected.