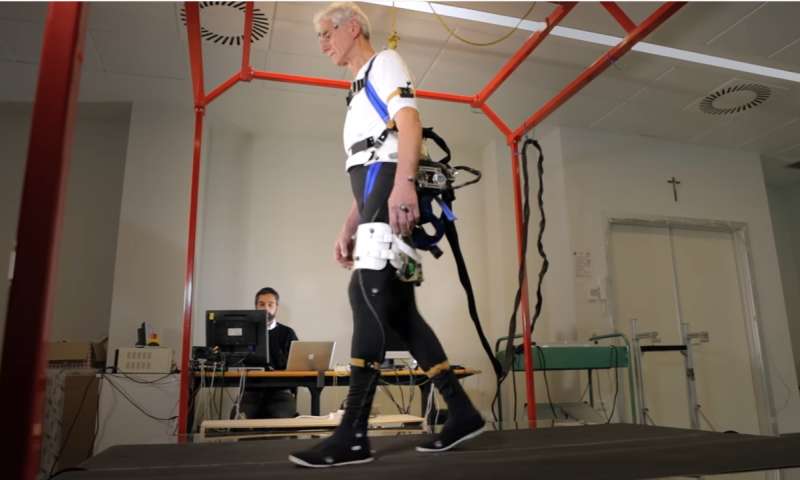 Scientists unveiled a lightweight, robotic, outer “skeleton” Thursday that can detect when someone loses their balance, correct their gait, and prevent their fall.

Designed to limit stumbles among the elderly, the device has sensors that can discern in real time when a limb starts to buckle or flail, and lightweight motors which exert instant force on both legs to restore balance.

“Wearable machines that enhance your movement and endurance no longer belong to the realm of science fiction,” the device’s creators say in a statement.

According to the World Health Organization, falls are the second cause of death from accidental or unintentional injuries worldwide.

Nearly 40 million falls that require medical attention are reported annually, says the WHO, and this number is likely to skyrocket as people live to become ever older.

Dubbed the Active Pelvis Orthosis or APO, the new device could also help disabled people and amputees, say its designers from the Scuola Sant’Anna, an Italian University, and Switzerland’s EPFL polytechnical school.

“It’s technology that will actually help people with their daily activities,” they add.

The team published the results of their lab experiments in the journal Scientific Reports.

The “exoskeleton” is worn from the waist down, its creators explained, “and is vastly different from the armoured stuff you see in today’s science fiction movies”.

It is attached to a belt worn around the middle that holds small motors at the hips, and soft braces strapped to the thighs.

The device weighs about five kilogrammes (11 pounds), can be easily adjusted to a person’s individual height and girth, and does not interfere with normal walking, the team said.

The “assistive mode” is activated only when balance loss is detected.

“The robotic exoskeleton is able to identify an unexpected slippage and counteract it,” Peppino Tropea, one of the study authors, tells AFP.

The APO “increases stiffness at hip joints against limb movements, indeed, the slipping leg is slowed down, while the other one is forced towards the ground. This strategy is effective for balance recovery.”

Tropea and the rest of the team tested their creation on eight elderly people and two amputees with prosthetic limbs—two groups particularly vulnerable to potentially devastating falls.

They were made to walk on a treadmill with a platform that would unexpectedly slip sideways, causing the walker to lose balance.

“I feel more confident when I wear the exoskeleton,” a statement quotes 69-year-old Fulvio Bertelli, one of the trial participants, as saying.