Some patients who could benefit from hippotherapy might not have access to a horse, due to geographic location, weather or affordability. Rice University engineering students have developed an alternative with their horse simulator, a robotic steed that can be ridden indoors anytime.

A team of students calling themselves the Hippo Riders created their device as a senior capstone design project at Rice’s Oshman Engineering Design Kitchen. The device will be demonstrated at the university’s annual Engineering Design Showcase April 14.

The simulator could give patients who use hippotherapy – also known as equine-assisted therapy — more opportunities to follow a regimen intended to help those with neurological or physical disorders like autism, arthritis, cerebral palsy and other ailments. The rhythmic, swinging motion is thought to enhance balance, coordination and motor development.

“It really does engage your core muscles and the ability to balance, and that’s what helps people,” said Amy Ryu, a mechanical engineering major. 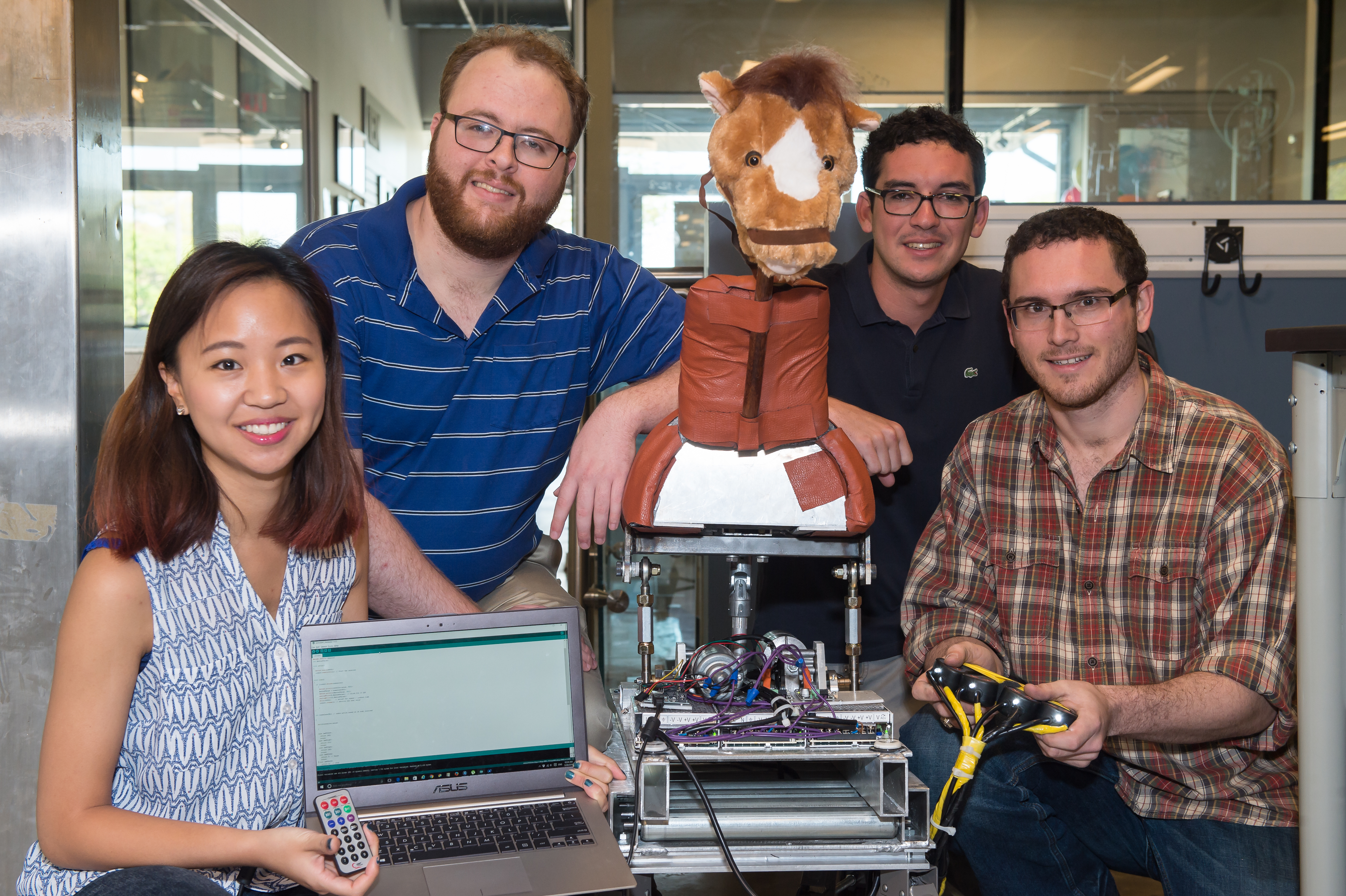 The robust prototype built with $1,200 in parts and a lot of labor began with help from Conroe-area physical therapist Janis Wells, who found her way to Rice through her work with team sponsors Harrell and Carolyn Huff. Carolyn is a Rice alumna.

“Janis was my physical therapist,” Harrell Huff said. “One day we were talking and I said, ‘Isn’t it expensive to have a horse and all this stuff? Why don’t y’all go to a bar and borrow one of those bucking broncos?’

“She said they can’t do that, so I said, ‘Would it be to your advantage to have a mechanical device that would substitute for a horse?’ I told her I knew a group that could probably design one.” 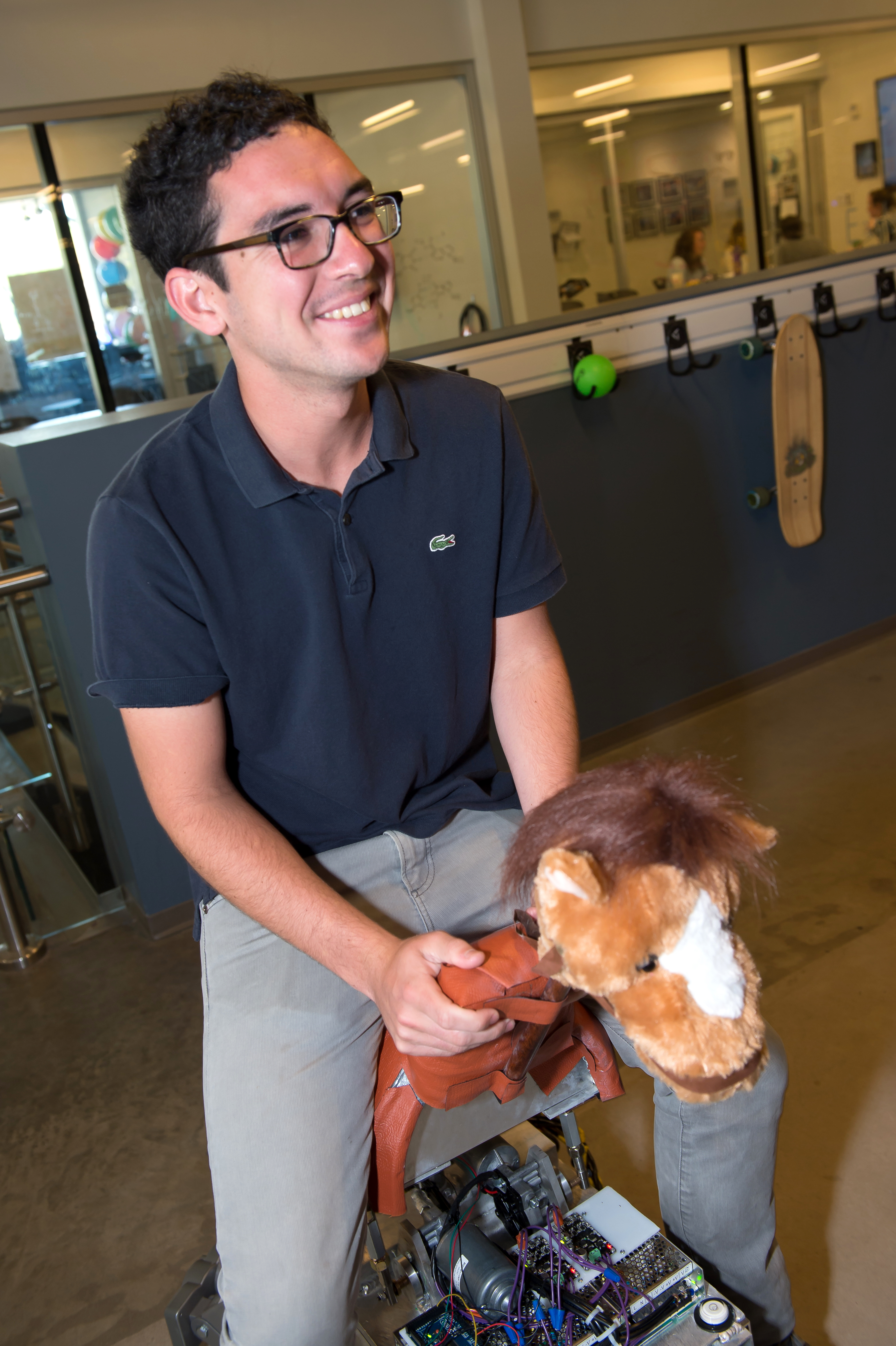 Jaime Gomez tests the horse simulator he and his Rice University engineering teammates created as their senior capstone design project.

Wells told the team she wanted a way for patients to ride indoors during inclement weather or when the cost of reserving a horse was a factor. Ryu said physical therapy sessions with a horse can cost up to $150 an hour.

The resulting device differs from mechanical bulls and kiddie rides at supermarkets in the degree of control offered by three motors that can be programmed to operate independently and simulate a variety of gentle gaits.

“We can control the voltage and current output,” said Brett Berger, also a mechanical engineering major. “That lets us run a complicated control program for different motions. 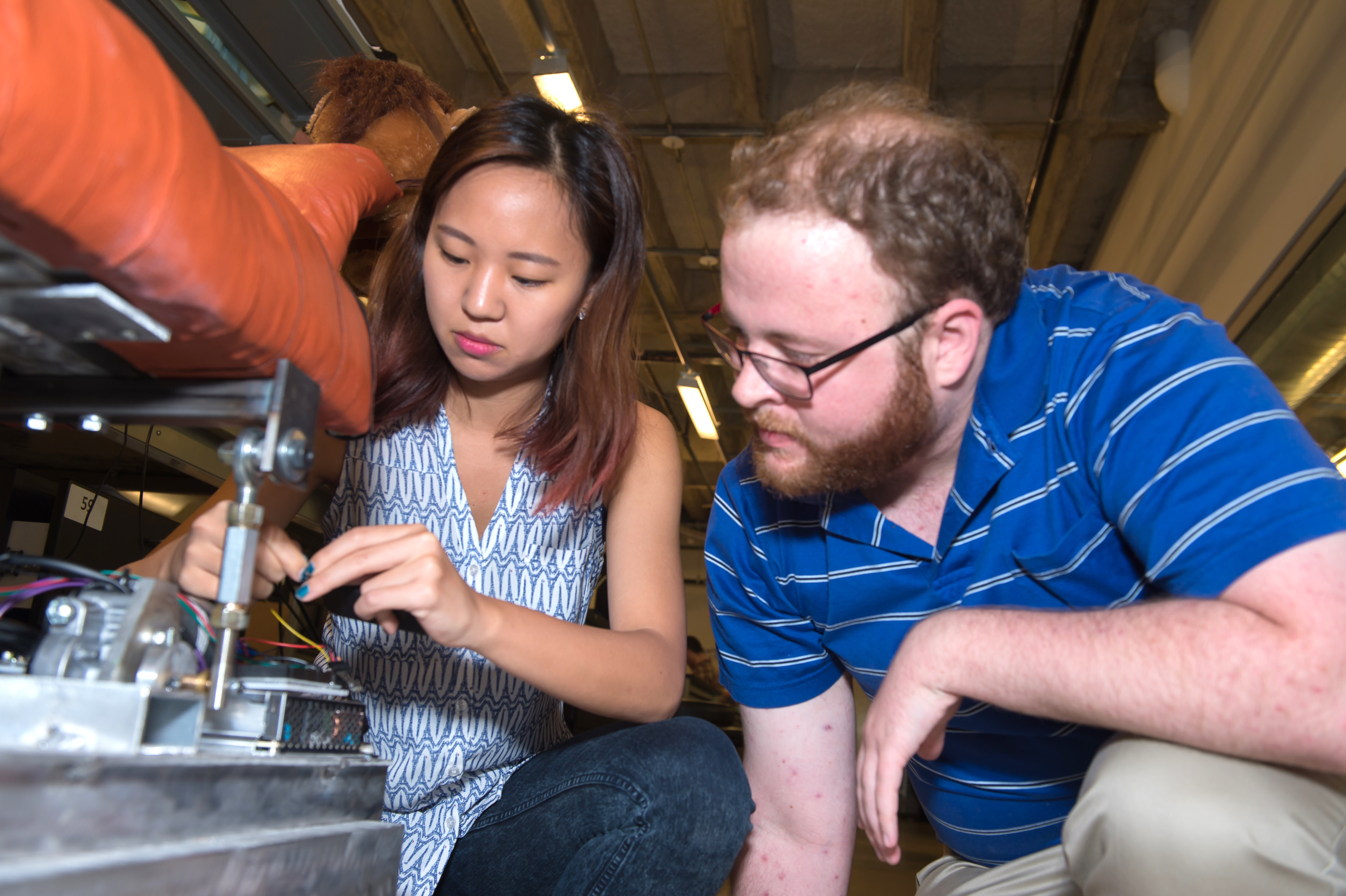 Amy Ryu and Erik Hansen make an adjustment to their robotic device that simulates the motions of a walking horse to help hippotherapy patients.

“In the ride outside a grocery store, you put a quarter in and it moves back and forth a little bit,” he said. “But in our device, we can control the speed, the intensity and the type of gait, all routed through a microcontroller.”

“Because the motors are independently controllable, we can exert a huge degree of control over how the horse is moving,” added Erik Hansen, the team’s lone bioengineering major.

The simulator can safely hold patients weighing up to 250 pounds, said the team members, who were advised by Rice engineering lecturer Matthew Elliott. “We designed it statically to hold much more than 250 pounds, and it won’t break until it goes up to 1,000-plus pounds,” Berger said. “But at 250 pounds, the motors stall. It’s just going to stop moving. The machine won’t continue, but it won’t break down.”

Motorized scissor lifts control the saddle height for each rider. 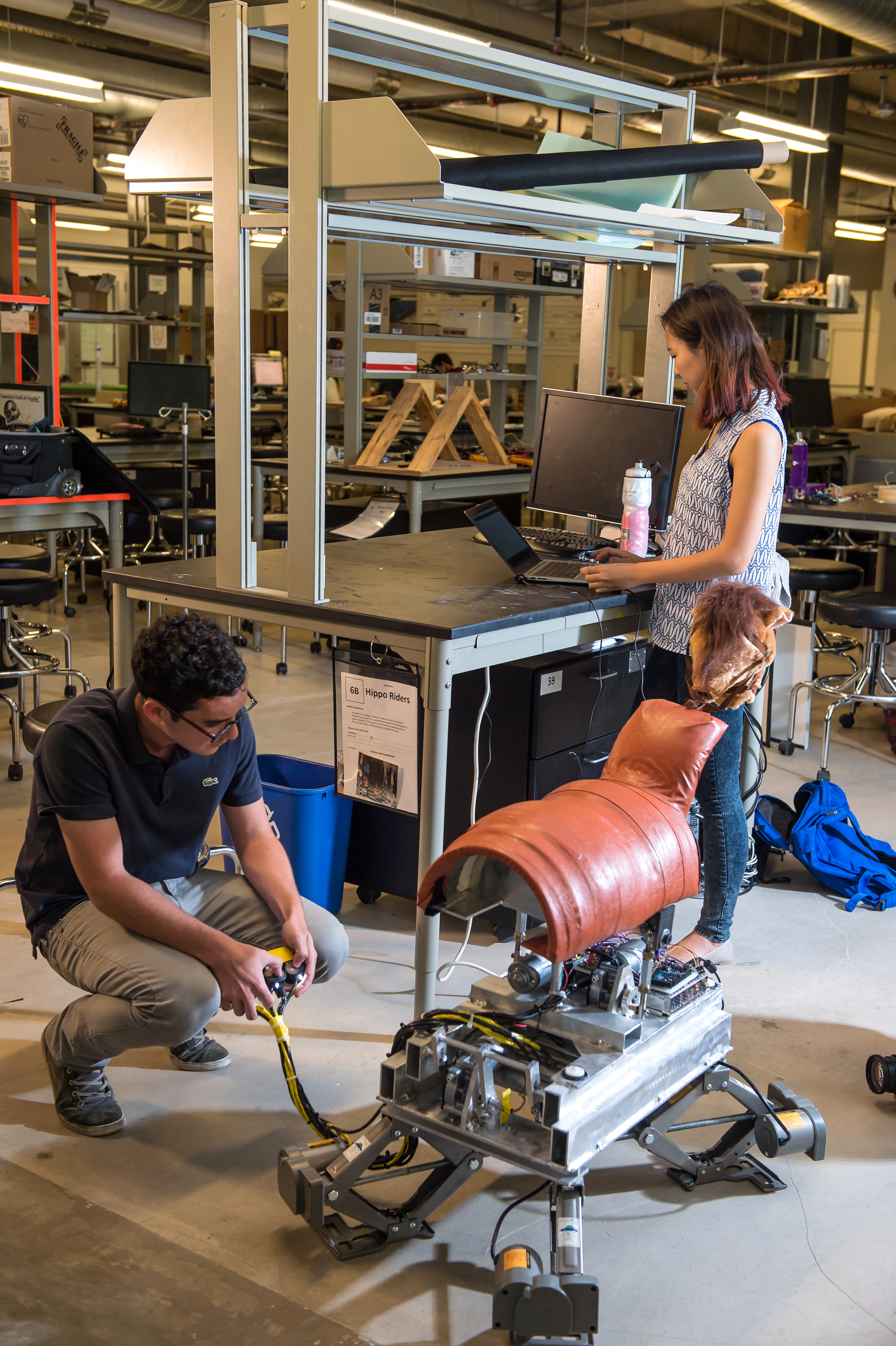 The horse simulator was created at Rice’s Oshman Engineering Design Kitchen, where students have all the resources they need to design and build projects. Here, students Jaime Gomez and Amy Ryu prepare to test their device, intended to simulate the motions of a walking horse for hippotherapy patients.

The students expect a new team of electrical engineering and computer science students will pick up the project next year and advance the control system to a more sophisticated level.

“We had to learn on the job how to weld, how to machine and how to build,” Berger said, noting that some computer programming was required as well. “But we don’t have the level of controllability we think our device is capable of. Moving forward, we expect another team will take it to the next level so that a physical therapist can use it in a clinic.”

“That’s going to require a more sophisticated control scheme than we have had time to learn how to do,” Hansen added. “A future team could get it to be like a horse walking through different kinds of obstacles or terrain.”

But the decorative, neighing hobby-horse head had better stay. Installing it was just too hard for the team to resist.