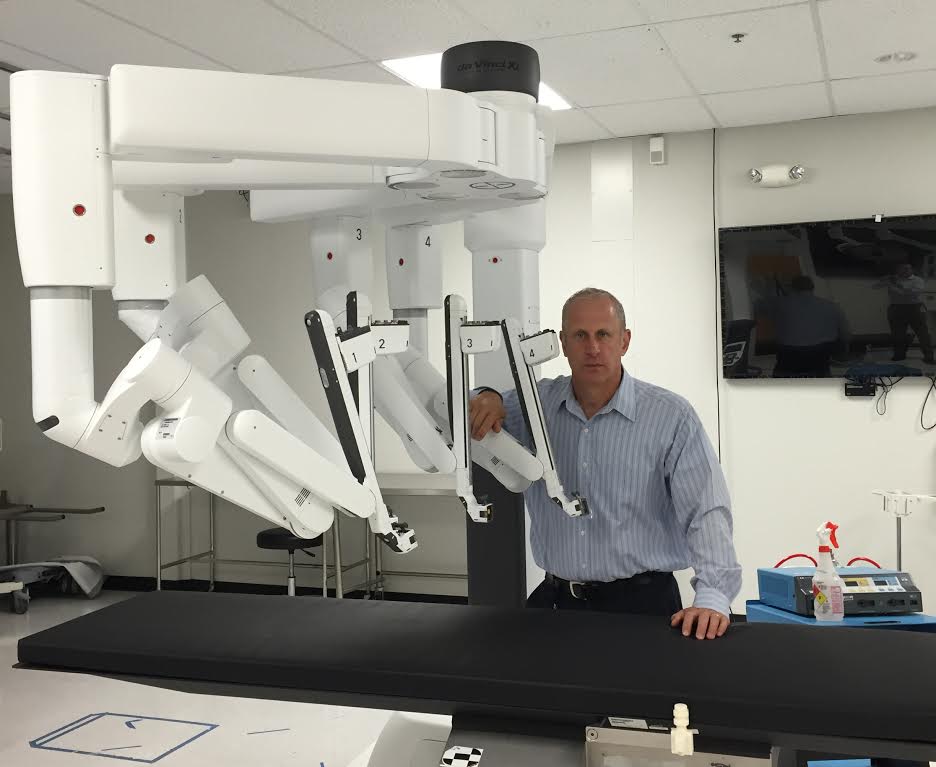 University of California, San Diego bioengineering alumnus Jonathan Sorger, Director of Medical Research at Intuitive Surgical in Sunnyvale, California, is one of the ten keynote speakers at the UC San Diego Contextual Robotics Forum on Oct. 30, 2015. Sorger will offer a vision of the future of medical robotics, including how technologies will continue to augment the surgical experience.

“As new surgical technology is developed, we will be able to attach it to robots and access parts of the body that simply were not possible before,” said Sorger. “I see surgical robots becoming far more effective.”

His talk will outline current surgical procedures affected by the field of robotics and address some of the clinical challenges faced by surgeons.

“For example, we have the ability to perform minimally invasive surgery on patients with prostate cancer, but there are still issues with positive surgical margins and incontinence,” said Sorger.

Intuitive Surgical has had success with robotics in surgery, developing the da Vinci Surgical System – a telemanipulator that allows doctors to perform less invasive procedures.

Preparing for a Career in Robotics
As an undergraduate at UC San Diego, Jonathan Sorger never expected that he’d end up working with robots. But as a bioengineering major, Sorger was exposed to the field of cardiac mechanics through professor Andrew McCulloch, a Distinguished Professor of Bioengineering and Medicine and co-director of the Cardiac Mechanics Research Group at UC San Diego.

“This led to my applying medical imaging to cardiac interventions during the course of my Ph.D. in biomedical engineering at Johns Hopkins under Elliot McVeigh, now a professor at UC San Diego,” said Sorger. “My thesis focused on magnetic resonance imaging (MRI) applied to ischemic heart disease. When I started at Intuitive Surgical I had zero experience with robotics. They hired me because of my imaging expertise, seeing that imaging would play into robotics in the future.”

Sorger acknowledges that leveraging his imaging background allowed him to move from academia to radiation oncology to surgical robotics.

“To graduating seniors or mid-career professionals looking for a change, I’d say, leverage the expertise you have to achieve your dreams,” said Sorger. “It’s up to you – the individual – to make a difference.”

Lighting Up Cancer
“With our newest model of the da Vinci, we have the potential to use fluorescence to light up cancer,” said Sorger. “In fact, there’s a group at UC San Diego trying to develop this method.”

Another UC San Diego professor, David Vera, has been working on developing a fluorescent molecule that has the potential to make robotically assisted surgery even less invasive.

“The original idea was to use a vision system to light up fluorophores in the blood, so that surgeons could identify blood vessels or other structures that they did not want to cut,” said Sorger. “We’ve seen success already in colorectal procedures, where a patient has part of their colon removed.  Surgeons at UC Irvine have been using the technology to significantly reduce leak rates following surgery.”

The work that Drs. Nguyen and Vera are performing has the potential to make surgery even more effective from a cancer-control perspective, Sorger explained.