After a much needed rest (altogether I had about sixteen hours of travel time getting to the first hotel) the first stop on the medtech tour of the Netherlands was the Delft University of Technology, also known as TU Delft. 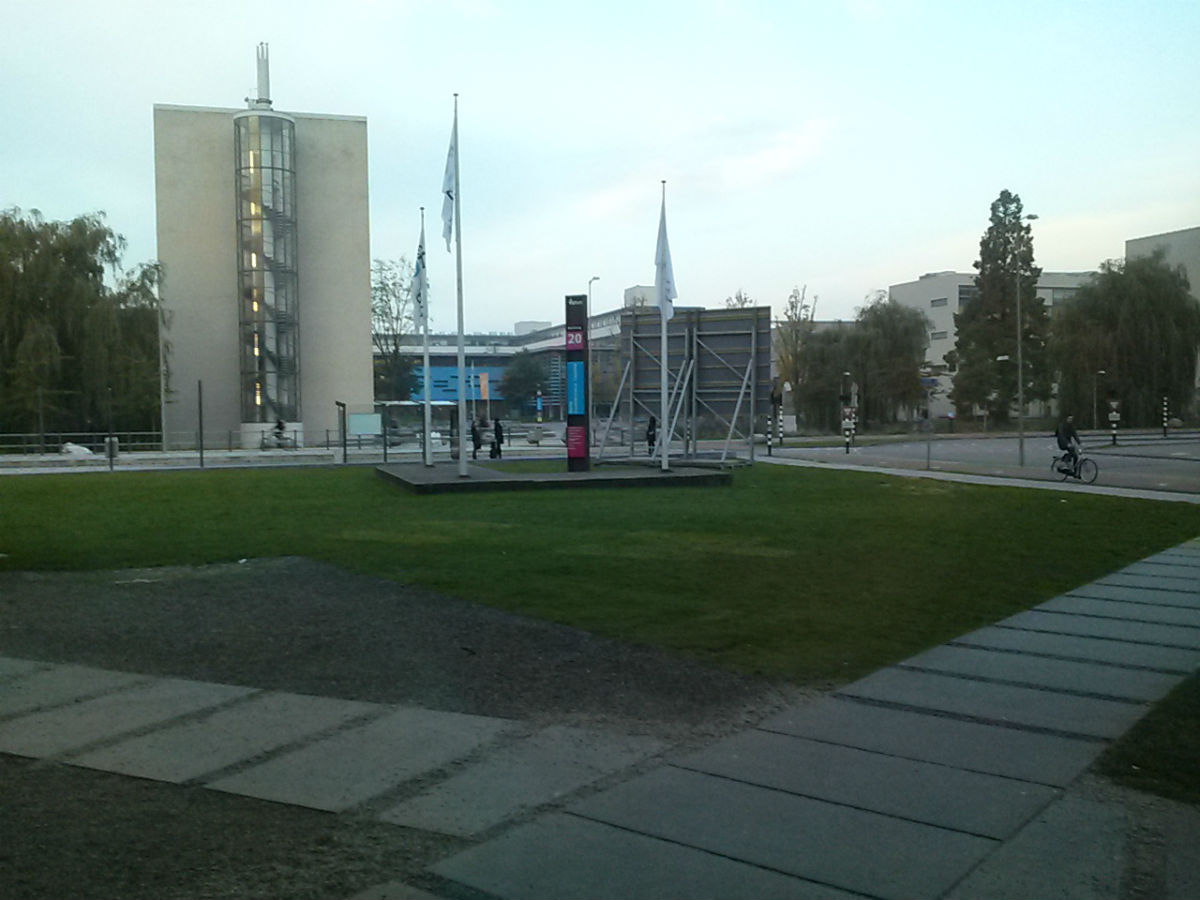 TU Delft’s BioMechanical Engineering Research Department has a focus on minimally invasive surgical techniques, designing and inventing instruments that are capable of safely and effectively reaching all crucial parts of the body. These instruments will hopefully be able to reach, diagnose, and treat tissue at potentially any part of the body, and make it relatively easy for surgeons to operate these devices. 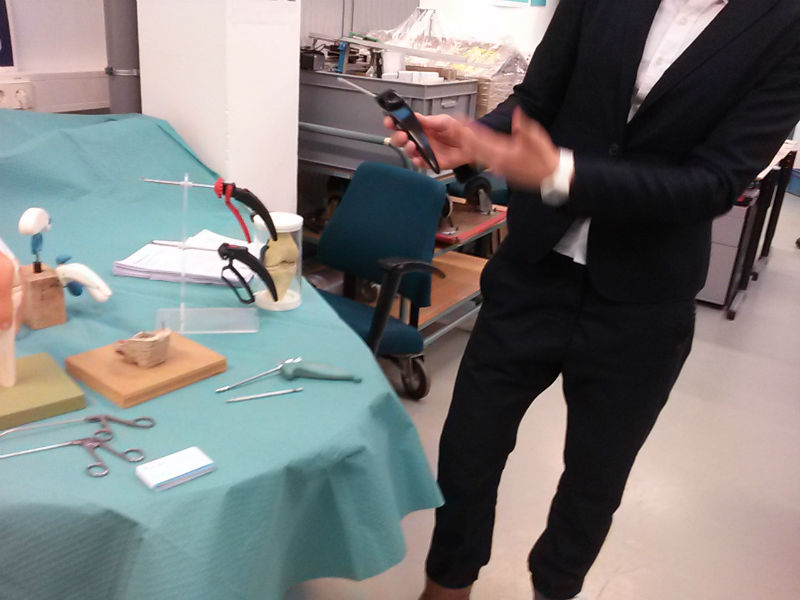 The team at TU Delft works directly with surgeons to assess feasibility in the clinic every step of the way. A device such as the one shown above is engineered for improved steerability – by way of a rolling contact link – and a stiff mechanism. The handle is ergonomically designed for surgeon comfort. Additionally, as sterilization is of the utmost importance for surgical instruments in particular, the TU Delft researchers address it very early in the design phase. The equipment is made in such a way that it can be disassembled and analyzed easily.

The TU Delft researchers also work with robotics and guided needle technologies. Reaching the exact spot for say, a biopsy, can result in multiple injections – something no patient or surgeon can be particularly happy about. The steerable needle in development there can be MRI guided, visible because of its titanium tip. One device in particular, which I got to try out, uses robotics to guide a needle into the tissue. 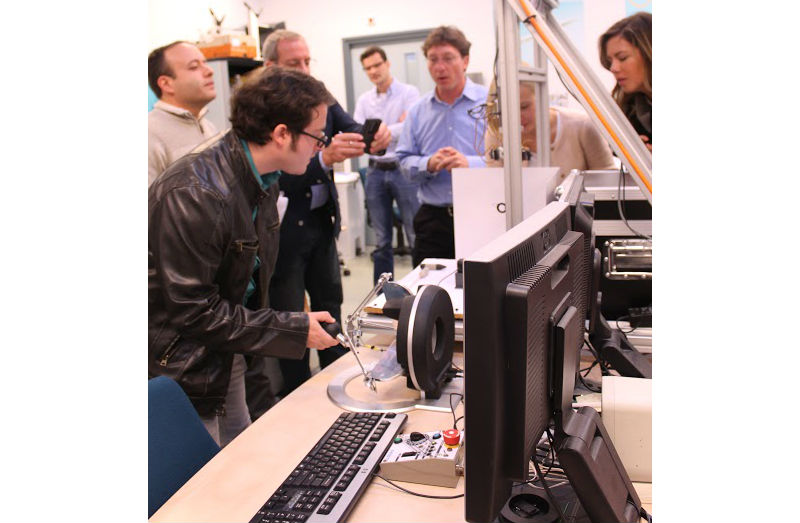 The controller took a little while for me to learn, but an hour’s practice or so and I should be clinic ready.

Another major focus for TU Delft’s BioMechanical Engineering program is called BITE, or Bio-Inspired technology. Rather than a biomimetic approach, which imitates nature, bio-inspired devices take cues from nature for their design. The researchers noticed that the “endo-wrist” on the Da Vinci surgical robot was prone to fatigue – the bending angle was so small, it wore out quickly. A Da Vinci robot’s endo wrist only lasts for about fifteen procedures.

To address this issue, the researchers turned to the structure of an octopus tentacle. 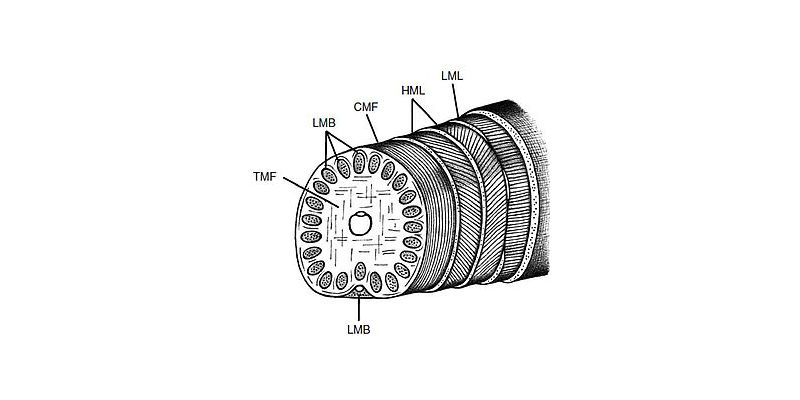 The researchers drew from the tentacle to develop a mechanism for controlling a flexible surgical instrument called a cable ring. It consists of a coil spring with a smaller coil spring inside, which is wrapped with cables. Interestingly, the mechanized version is a minimalistic approach to the squid tentacle – nature maximizes the number of moving parts what with all the muscles and ligaments – and the technology version minimizes this with a few coils and cables. The resulting surgical device looks like this:

From tentacle to technology!

The system of cable routes allows this device to be incredibly flexible, and reach parts of the body that would typically require an invasive procedure to do so. Controlling it is relatively simple: the surgeon bands the device’s “joystick” into the desired shape, and the octopus tentacle follows. There’s nothing customizable about the device’s design, either; the cables and springs required can likely be purchased at a hardware store.

The TU Delft researchers also plan to use the tentacle approach for multi-steerable and “dendritic” versions of the device. This could be useful for eye or skull-base surgeries, where developing a planning route to reach the area is quite difficult, and very invasive. This device might eventually have the ability to branch automatically with shape memory control to take the best access route to the base of the skull, and drastically shorten patient recovery time without the need for an invasive procedure.