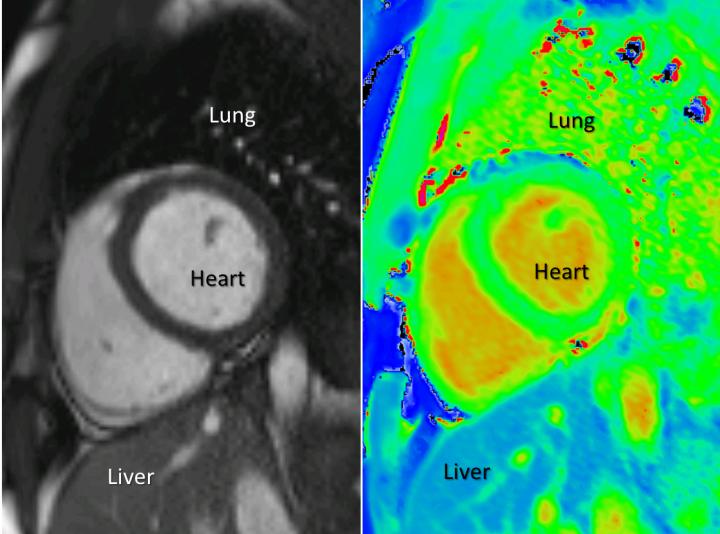 Doctors currently rely on black and white MRI pictures (left) to diagnose heart disease, which can be very subjective. Doctors in the future may be able to use color coded pictures, called T1-maps, (right) to tell their patients more about the health of their hearts. In this image, the heart is in the center with the liver below it. A lung can be seen top right. (Credit: Dr. Alexander Liu/ OCMR/ University of Oxford)

A team of Oxford University researchers has developed a technique that could improve heart scans for patients, giving more information about the heart than traditional scans and without any injections, making them safer and faster.

The group of medical, physics and engineering researchers are based at the Oxford Centre for Clinical Magnetic Resonance Research (OCMR). They are using a property of hydrogen atoms to create a pixel-by-pixel map of the heart, called a T1-map, which allows examination of healthy and diseased heart tissue in greater detail than before.

Currently, stress scans of the heart using magnetic resonance imaging (MRI) require patients to be injected with two substances. Adenosine is a medication injected into the patient that causes effects similar to exercise during the scan. Gadolinium – a rare earth heavy metal – is injected as a contrast agent to highlight areas of the heart suffering from decreased blood flow under exercise conditions.

Dr. Alexander Liu, who leads the research with the guidance of his supervisors – Dr. Vanessa Ferreira, Dr. Stefan Piechnik and Professor Neubauer (the center director), explained: ‘We wanted to see if using T1 mapping can give clearer, more clinically-useful results compared to traditional MRI scans that require injections of contrast agents. On traditional MRI scans, doctors are judging relative shades of light and dark on a scan, and even the most experienced specialists can disagree on what the image is showing them. T1 maps provide an objective number, which can be coded in colors, and may be less subjective. Additionally, patients with severe kidney failure – who are usually at higher risk for heart disease – cannot clear Gadolinium and often are unable to benefit from a full MRI scan of the heart. T1-maps can potentially solve this problem in the future.’

In physics, T1 is the time constant that describes how quickly atoms return to normal thermodynamic state after being affected by radio waves and strong magnetic fields. Just like measuring body temperature in Celsius or Fahrenheit, the numbers themselves may not mean much, but any deviation from established normal ranges can suggest disease. In the case of T1 mapping, long T1 times indicate the presence of more water, something found in a number of heart conditions, including areas of the heart suffering from lack of blood supply due to blocked arteries. A T1-map just helps to visualize T1 values across the heart and find the precise location of the problem. It takes around three minutes to map the whole heart, and the values it measures are turned into a color map, giving doctors an image which is potentially quicker to understand with less subjective interpretation.

Dr. Stefan Piechnik developed the specific T1 mapping technique at Oxford, named ShMOLLI. He said: ‘T1 mapping allows us to look in finer detail at the heart in a non-invasive way, which has not been possible before. We can now get results without Gadolinium, meaning we have a technique that is safer and quicker and can be used with more people. The results are also less dependent on interpreting the images – medics have something based on hard numbers.’

Dr. Liu added: ‘Further studies will concentrate on how we can use T1 mapping not only to improve our research but eventually develop this into a tested, clinically proven technique for use with patients worldwide.’

Dr. Vanessa Ferreira, Deputy Clinical Director of the OCMR, said: ‘The potential of this research is huge – not only for heart scans. Each type of tissue across the body has a range of normal T1 values, so any values outside that range may signify disease. The pixel by pixel level of detail from these scans could help identify unhealthy tissue wherever it appears. Oxford is now applying this technique to scan other organs. The UK Biobank also aims to scan 100,000 individuals from the UK population using the ShMOLLI T1-mapping technique, which will provide a lot of information on T1 values in health and in certain medical conditions. All these studies aim to translate this technique into clinical use, likely within the next 5 years.’