As headlines highlight the threat of viruses like Ebola and Zika, researchers at Sandia National Laboratories and the University of California Los Angeles (UCLA) have teamed up to discover and uncover the viral mechanisms of infection by creating screening libraries based on CRISPR (clustered regularly interspaced short palindromic repeats) genome-editing technology.

“CRISPR technology allows researchers to easily knock out or remove specific genes from a host cell,” said Sandia researcher Oscar Negrete, who is spearheading the project for Sandia to develop the libraries that will be used to screen Zika and many other viruses. “CRISPR libraries are built to target large sets of genes simultaneously.” 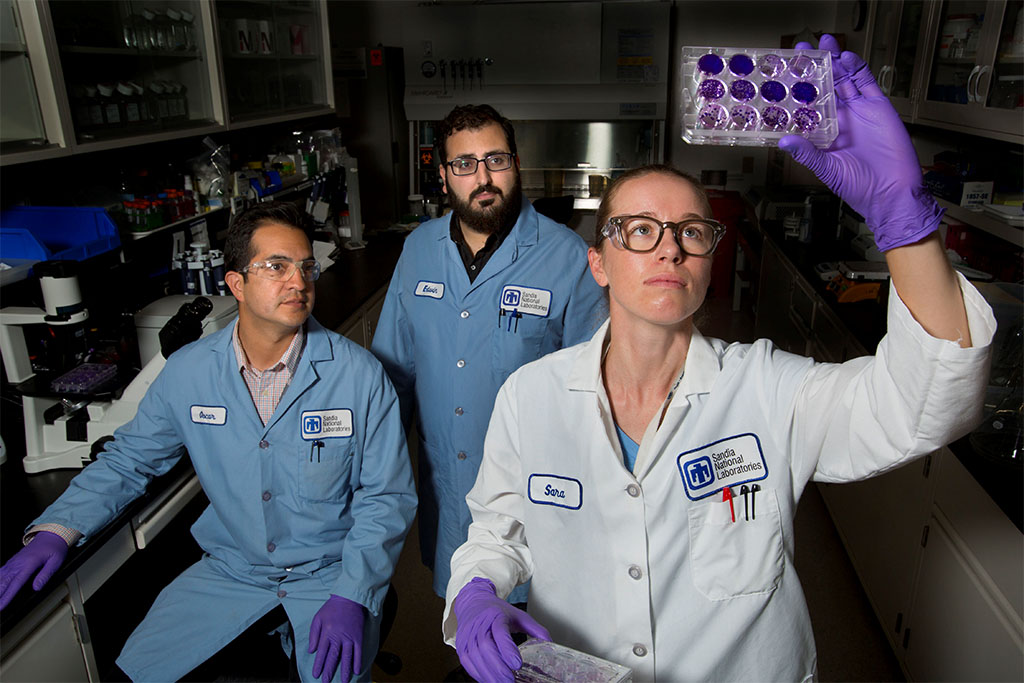 Sandia National Laboratories researchers, from left to right, Oscar Negrete, Edwin Saada and Sara Bird check out a CRISPR library preparation. The work is part of the first-ever Cooperative Research and Development Agreement between Sandia and UCLA. (Photo by Dino Vournas)

Using these libraries, researchers can rapidly understand how removal of these genes affects virus infection. By discovering host genes essential for infection through CRISPR library screening, researchers can begin to design anti-viral treatments using those identified gene or gene products as targets.

Negrete is co-leading the project with Robert Damoiseaux, director of the Molecular Screening Shared Resource at UCLA. Sandia researchers Joe Schoeniger, Sara Bird and Edwin Saada also are working on the yearlong project, “Development of Arrayed CRISPR-based Libraries for Functional Genomics Screening.” The work is part of the first-ever Cooperative Research and Development Agreement (CRADA) between Sandia and UCLA.

This work is conducted under Sandia’s Laboratory Directed Research and Development program, which invests in high-risk, potentially high-payoff science, technology and engineering challenges with high potential to make a significant impact on national security.

“The purpose of our CRADA is using an alternative method of library assembly to produce arrayed CRISPR libraries at a fraction of the cost of standard methods,” Negrete said. “Instead of producing individual constructs one-by-one which by standard methods are relatively expensive and labor intensive, we will start out with a mixture of CRISPR constructs called a pooled library that is easy and inexpensive to produce, then separate or array the mixture into individual constructs using high-throughput robotic equipment. Using next-generation sequencing, we can then decode the constructs to build the arrayed formatted library.”

“Like a jar of jellybeans, a pooled CRISPR library is a complex mixture,” Negrete explained. “An arrayed library on the other hand, is more like individually wrapped and labeled jellybeans. When you identify a particular CRISPR of interest from a pooled screen, you still have to run a deconvolution experiment to know what you have. In arrayed libraries, the CRISPR of interest is already labeled, therefore hit identification is much easier, quicker and cheaper.”

Researchers aim to produce a genome-scale arrayed CRISPR library, but will initially focus on building a sub-library that targets the membrane proteins involved in cell communication and that act as receptors for pathogen entry.

CRISPR evolved in nature as a bacterial defense system and now serves as the basis of a powerful genome editing technology. Unlike other gene-editing methods, CRISPR is cheap, quick and easy to use. Negrete said CRISPR has created a biotechnology revolution similar to the discovery of the polymerase chain reaction (PCR) technique used to make millions of copies of a segment of DNA. 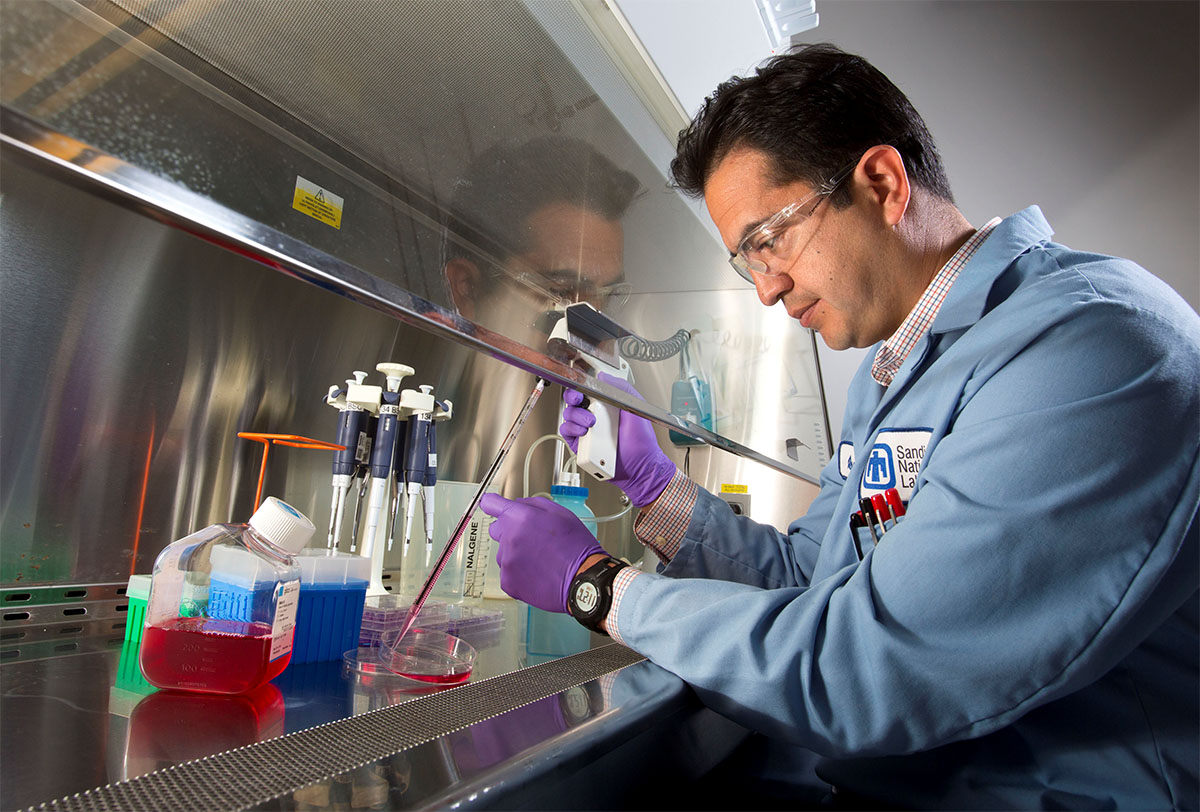 “This technology is moving medicine to a whole new direction where researchers are trying to cure any disease that has a genetic component,” Negrete said. “With CRISPR, it is theoretically possible to modify any genome including the human genome. It could one day hold the cure to any number of genetic diseases.”

“As a research tool, CRISPR is an ideal genome engineering system for functional genomic screening,” Negrete said. “CRISPR-based genetic screens are particularly useful for studying diseases or phenotypes for which the underlying genetic cause is not known.”

Before CRISPR, scientists relied heavily on RNA interference-based genetic screens, which are prone to off-target effects and may result in false negatives due to incomplete knock-down of target genes. The CRISPR system can make highly specific, permanent genetic modifications in target genes and already has been used to screen for novel genes that regulate disease-related phenotypes.

The most common method for conducting genome-wide screens using CRISPR involves the use of “pooled” libraries. A pooled CRISPR library is a complex mixture of thousands of unique sequences, which is then delivered to a single group of cells in bulk for screening disease phenotypes. Since the libraries are delivered in bulk, analyses of phenotypes are limited. By contrast, arrayed CRISPR libraries are generated in multiwell plates, where each well contains a vector preparation targeting an individual gene. Using this type of library, it is possible to explore complex phenotypes arising from a vast number of distinct cell perturbations. In addition, arrayed libraries provide access to rapid secondary follow-up screens.

Access to screening of this novel CRISPR library will be made available to a wider scientific audience on a case-by-case basis. Sandia also plans to use the libraries for screening of viral mechanisms and drug target discovery.

The Molecular Screening Shared Resource (MSSR) offers a comprehensive range of high throughput screening services including chemical genomics, func­tional genomics and drug discovery. The MSSR is an open environment and welcomes academic investigators from UCLA and from all over the globe.

“This is just the beginning for the applications of this type of technology,” Negrete said. “If we can make an impact on Ebola and Zika, then we have accomplished our goal.”