Everyone makes mistakes, but when scientists do, the remedy goes far beyond saying you’re sorry. Two fresh examples show how some journals and universities react when the need arises to set the record straight.

On Wednesday, the New England Journal of Medicine retracted and republished a landmark study on the Mediterranean diet, and issued an unprecedented five other corrections after an obscure report last year scrutinized thousands of articles in eight journals over more than a decade and questioned some methods.

Separately, Cornell University said it was investigating “a wide range of allegations of research misconduct” raised against a prominent food marketing faculty member.

The New England Journal‘s review did not alter any conclusions and should raise public trust in science, not erode it, said its top editor, Dr. Jeffrey Drazen.

“When we discover a problem we work very hard to get to the bottom of it,” he said. “There’s no fraud here as far as we can tell. But we needed to correct the record.”

“Retractions are definitely on the rise” and there are 10 times as many corrections as retractions, said Dr. Ivan Oransky, a health journalism professor at New York University and co-founder of Retraction Watch, a website that tracks errors in science journals.

“The main reason they’re up is that people are looking,” and the internet makes it easier with tools to detect plagiarism and manipulated images, Oransky said.

Studies are often the main source of evidence that guides doctors’ decision-making and patient care, and that’s why journals are so meticulous when that evidence is called into question. 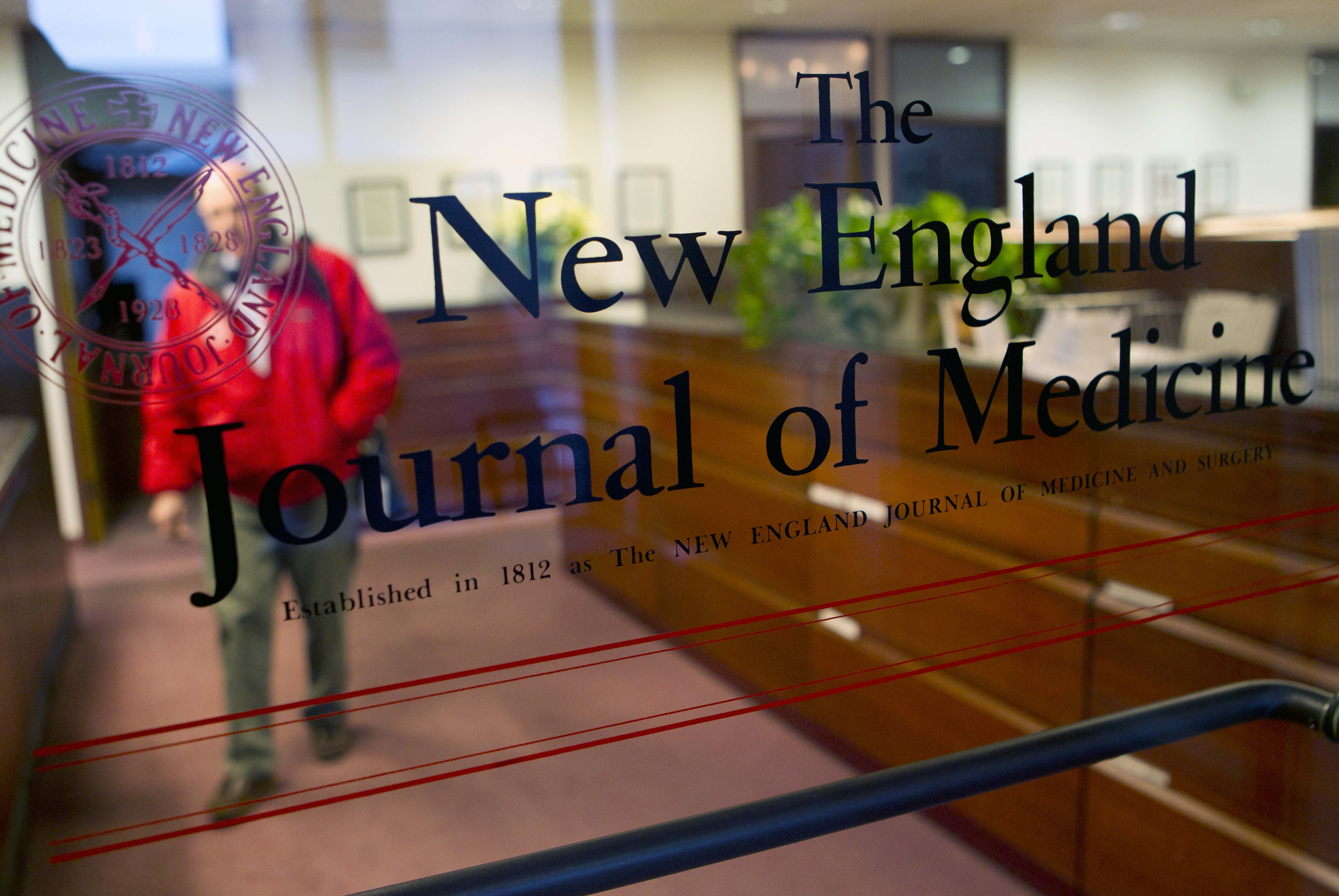 This Dec. 29, 2011 file photo shows the entrance to the editorial offices of the New England Journal of Medicine in Boston. On Wednesday, June 13, 2018, the journal retracted and republished a landmark study on the Mediterranean diet, and issued an unprecedented five other corrections after an obscure report in 2017 scrutinized thousands of articles in eight journals over more than a decade and questioned some methods. The New England Journal’s review did not alter any conclusions and should raise public trust in science, not erode it, said its top editor, Dr. Jeffrey Drazen. (AP Photo/Michael Dwyer)

Here’s what happened at the New England Journal.

Many experiments randomly assign people to different groups to compare one treatment to another. The groups should be similar on height, weight, age and other factors, and statistical tests can suggest whether the distribution of these traits is implausible, compromising any results.

Dr. John Carlisle of Torbay Hospital in England used one such test to scrutinize thousands of studies from 2000 through 2015 including 934 in the New England Journal and flagged 11 as suspicious.

The journal contacted each author and “within a week we resolved 10 of the 11 cases,” Drazen said. In five, Carlisle was wrong. Five others were terminology errors by the authors — Wednesday’s corrections.

The last was the diet study on 7,500 people in Spain, which established that eating lots of fish, vegetables, olive oil and nuts could slash heart risks by 30 percent — front-page news everywhere.

Researchers dug through records and discovered that one study site had not followed procedures — if one person in a household joined the study, others such as a spouse also were allowed in. That makes the group assignments not truly random. When results were re-analyzed without those folks, the bottom line remained the same, and the journal is now publishing both versions.

“I’ve been impressed” with the response, Carlisle said.

His analysis also covered 518 studies in the Journal of the American Medical Association, but JAMA has not done a systematic review, said its top editor, Dr. Howard Bauchner. Instead, the journal asks authors to respond if concerns are raised about specific articles and publishes those as they arise.

Last week, JAMA published an “expression of concern ” about six articles by Brian Wansink, head of the Cornell Food and Brand Lab, “to alert the scientific community to the ongoing concerns about the validity of these publications” and ask Cornell to do an independent evaluation.

Wansink has had seven papers retracted (one twice), 15 corrections and now this expression of concern, Oransky said.

Wansink said in an email that he has been working with co-authors in France, Israel and the Netherlands “to locate the original data sets and reanalyze and the data in the papers,” and that materials will be independently analyzed by Cornell and reported back to the journal.

Cornell’s statement says a committee of faculty members has been investigating allegations against Wansink since last fall and working with federal agencies that sponsor research.

“The assertions being made by outside researchers and the retraction of multiple papers from academic journals by the Food and Brand Lab are concerning. Our silence on this matter to date should in no way be construed as a disregard for the seriousness of the claims being raised nor as an abdication of our obligation to explore them.”