Arthritis isn’t always from the wear and tear of getting older — younger adults too often get it after suffering knee or ankle injuries. Now researchers are hunting a way to stave off the damage, by targeting the little energy factories that power cartilage cells.

University of Iowa scientists used pigs to mimic the cascade of cartilage damage that can begin with a broken ankle. Wednesday’s study found using some old medications in a new way — rapidly injecting them into the animals’ joints — interrupted that cycle of cell dysfunction to protect against arthritis.

The researchers are seeking funds for human studies, part of a growing effort to understand why an aggressive form of arthritis can develop after some common orthopedic injuries — a torn knee ligament, for example, or a broken bone in a joint — seem to have healed.

“It’s very promising,” says regenerative medicine specialist Farshid Guilak of Washington University in St. Louis, who wasn’t involved in the new study. “There are no therapies right now, for any form of osteoarthritis, that have been shown to modify the disease.”

Osteoarthritis, the most common kind, usually occurs when joint-cushioning cartilage gradually wears away over decades of use. But about 5.6 million people in the U.S. get a subtype that strikes faster — post-traumatic osteoarthritis that’s sparked by injuries to weight-bearing joints.

People who’ve experienced knee injuries, for example, are three to six times more likely to develop arthritis in that joint, and to get it a decade or so earlier, than people who’ve never been injured, according to a report last year in the Journal of Athletic Training.

And ankle fractures that crack into the cartilage can trigger post-traumatic osteoarthritis even faster, making it ideal to study in the joints of 200-pound pigs that react a lot like human ankles. 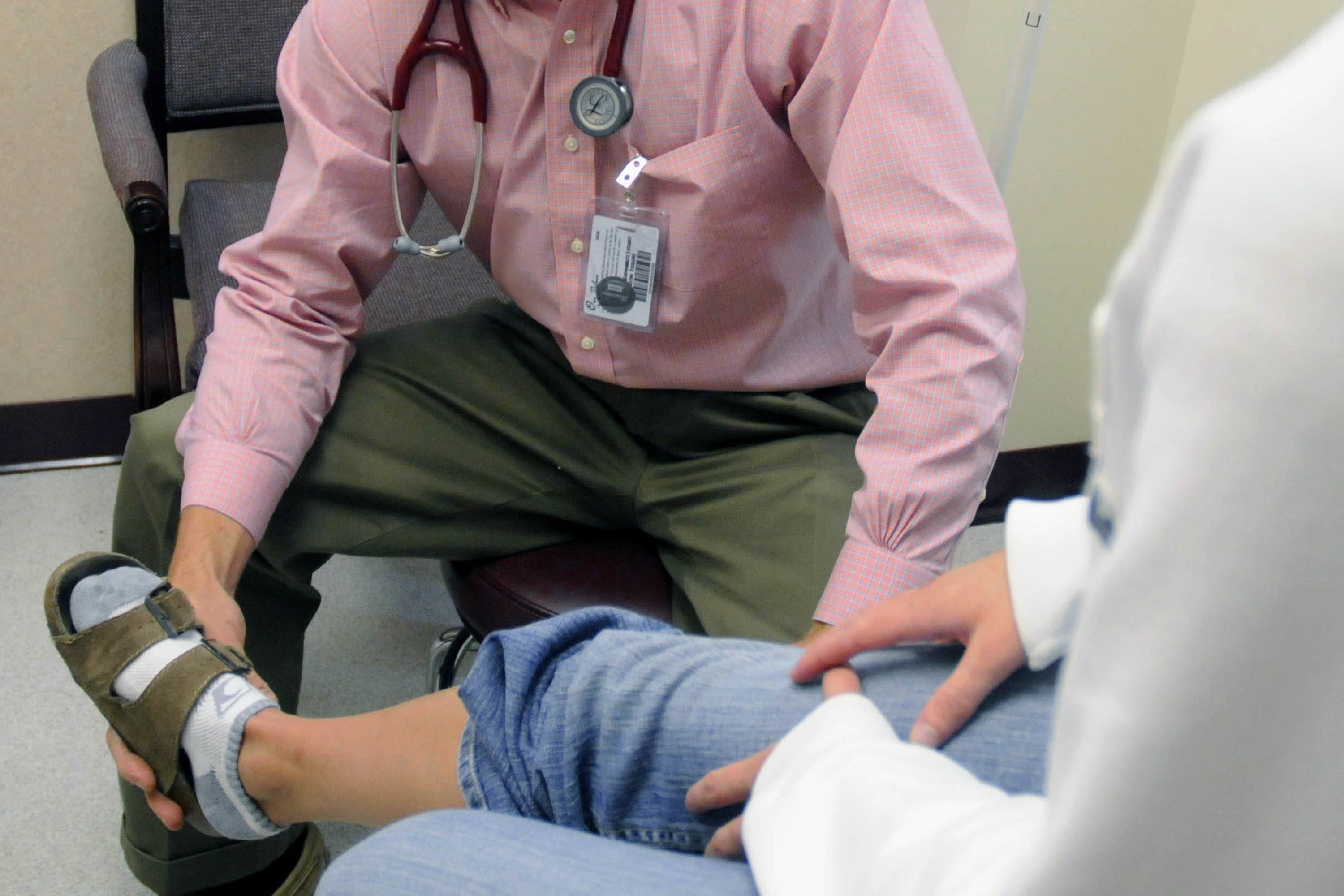 In this September 2008 file photo, a physician discusses an ankle injury with a patient in Lawrence, Kan. Arthritis isn’t always from the wear-and-tear of getting older _ too often, younger people get it after suffering knee or ankle injuries. According to a study released Wednesday, Feb. 7, 2018, researchers are hunting for a new way to stave off the damage, by targeting the little energy factories that power cartilage cells. (Mike Yoder/The Lawrence Journal-World via AP)

With funding from the Defense Department and National Institutes of Health, the Iowa team took a closer look. Only some cartilage cells die immediately upon impact. But over the next 48 hours, additional ones die and others become increasingly dysfunctional.

Inside cells are tiny power plants, often introduced in middle-school biology as “the mighty mitochondria.” Somehow, the joint injury triggered the mitochondria inside cartilage cells to become wildly overactive and generate substances called oxidants in a damaging cycle.

“What’s compelling,” says University of Iowa lead researcher Mitchell Coleman, “is if you can interrupt that early process, whatever is going on with those mitochondria in the first day, you can have a significant benefit to the tissue itself.”

That’s just what his team did, using two old drugs — the sedative amobarbital, known to inhibit cellular energy generation, and an antioxidant named N-acetylcysteine — to aim at different parts of that cycle.

To act inside the joint without body-wide side effects, the researchers created, and patented, gel formulas of the drugs that are liquid while being injected but solidify at body temperature. They injected one or the other drug into the pigs’ joint fractures, following the injury and a week later.

“It will sit there where you injected it,” Coleman explains. A typical liquid drug “will squish right back out.”

Each drug separately helped preserve cartilage, the team reported Wednesday in the journal Science Translational Medicine. A year later, the cartilage in the treated animals showed significantly less deterioration than pigs given sham treatment, and the treated animals displayed no signs of pain.

It will take lots of additional research to tell if the approach works in people.

For now, people who’ve had risky joint injuries should guard against further damage by getting proper treatment for the injury and keeping up appropriate exercise, says Dr. Lisa Cannada, a trauma specialist speaking for the American Academy of Orthopaedic Surgeons.

“Maintain strong muscles to minimize the wear and tear on your joints,” she advises.