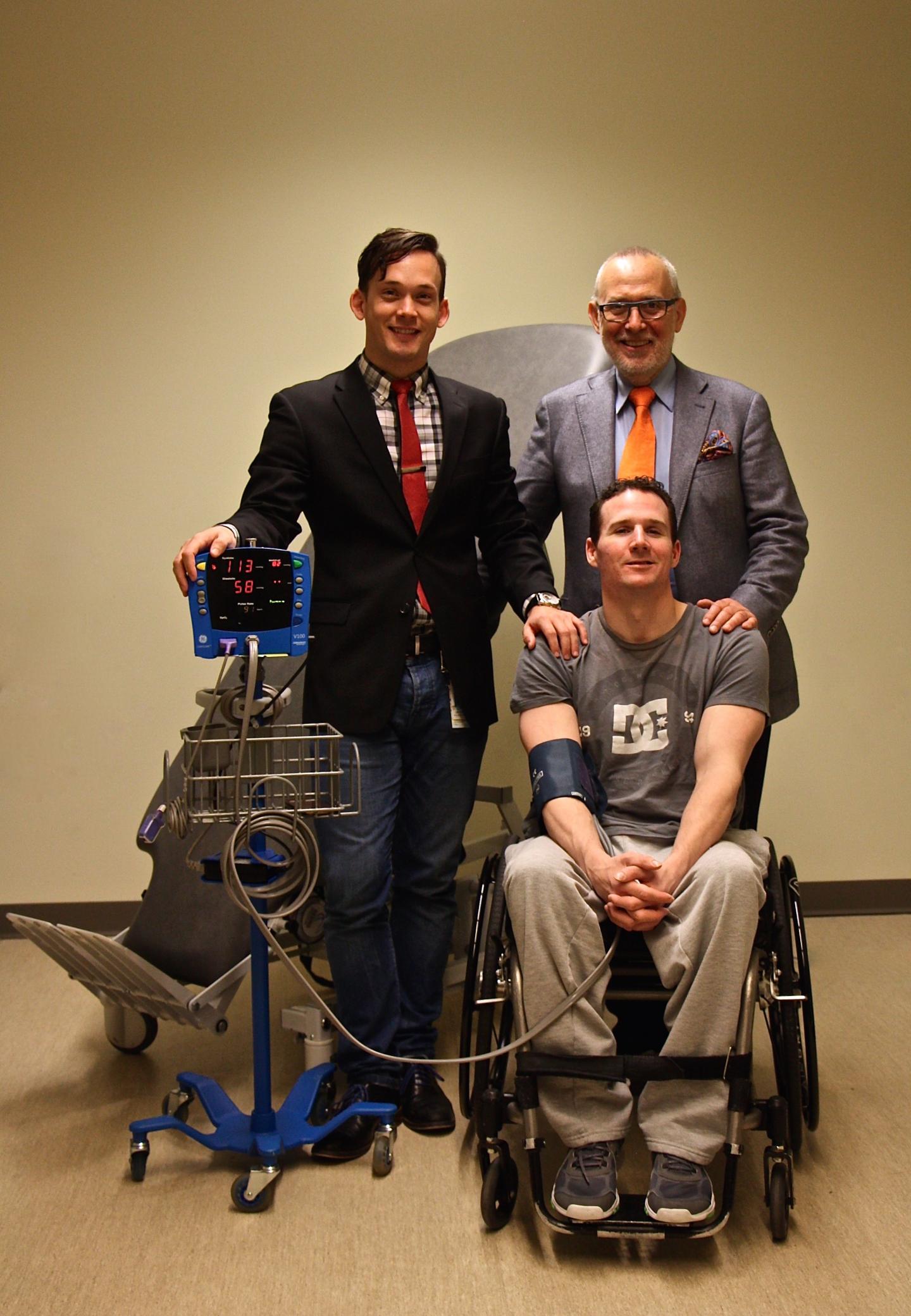 Drs. Aaron Phillips (left) and Andrei Krassioukov with Darrell Isaac, a spinal cord injured individual who has been implanted with an epidural spinal cord stimulator. The “neuroprosthetic” device helped to restore Isaac’s cardiovascular function as indicated by improvements in blood pressure and other measures. (Credit: University of British Columbia)

Mitral valve regurgitation, in which blood leaks the wrong way through the mitral valve, is the most common type of heart valve disorder. Surgeons can repair the mitral valve to ensure it closes properly during each heartbeat. Surgeons prefer to repair rather than replace the valve, but repairs have a high learning curve due to the mitral valve’s complex anatomy. To increase repair success rates, a team at Western University in London, Ontario, have created patient-specific mitral valve models using 3D printing, which can be placed in a beating heart simulator. Using the realistic models to plan and practice could help surgeons personalize their surgical approach and improve patient outcomes.

Plaque buildup in the heart’s arteries is the most common form of heart disease and the leading cause of death in the U.S. Researchers at the University of Ottawa have discovered a way to inhibit key enzymes behind plaque accumulation, inflammation and rupture–the processes that lead to heart attacks, strokes and other cardiovascular problems. Suppressing these enzymes in mouse models markedly reduced plaque formation, inflammation and instability, suggesting a promising new way to slow plaque buildup and prevent dangerous ruptures.

Recent years have brought exciting advances in stem cell therapies that help rebuild heart tissue damaged during a heart attack. In a study led by researchers at the University of Illinois at Chicago, scientists have identified a crucial biochemical “switch” that directs stem-cell like progenitor cells derived from human skin fibroblasts to form either blood vessels or red blood cells. Experiments using mice show that implanting these progenitor cells induces the production of blood vessels and blood cells and markedly improves heart function after a heart attack.

An innovative imaging system developed by researchers at Washington University allows scientists to track, in living animals, the interactions between blood vessels and key components of the immune system in astounding detail. The team has used their method to identify factors that regulate the lymphatic system and to investigate the role of immune cells in the buildup of plaque in the heart’s arteries. They hope the method will yield new insights on diseases involving inflammation and help advance immunity-based cancer therapies.