Scientists from the Moscow Institute of Physics and Technology (MIPT), Semenov Institute of Chemical Physics of the Russian Academy of Sciences (ICP RAS), and Chuiko Institute of Surface Chemistry of the National Academy of Sciences of Ukraine (ISC NASU) have proposed a model nanosized dipole photomotor based on the phenomenon of light-induced charge redistribution. Triggered by a laser pulse, this tiny device is capable of directed motion at a record speed and is powerful enough to carry a certain load. The research findings were published in the Journal of Chemical Physics.

“The unprecedented characteristics of dipole photomotors based on semiconductor nanoclusters offer the prospect of more than just addressing a certain scarcity of the translational photomotors family. These devices could actually be applied wherever rapid nanoparticle transport is required. In chemistry and physics, they could help develop new analytical and synthetic instruments, while in biology and medicine they could be used to deliver drugs to diseased tissues, improve gene therapy strategies, and so on,” says Prof. Leonid Trakhtenberg of the Department of Molecular and Chemical Physics at MIPT, who is the leader of the research team and the head of the Laboratory of Functional Nanocomposites at ICP RAS. 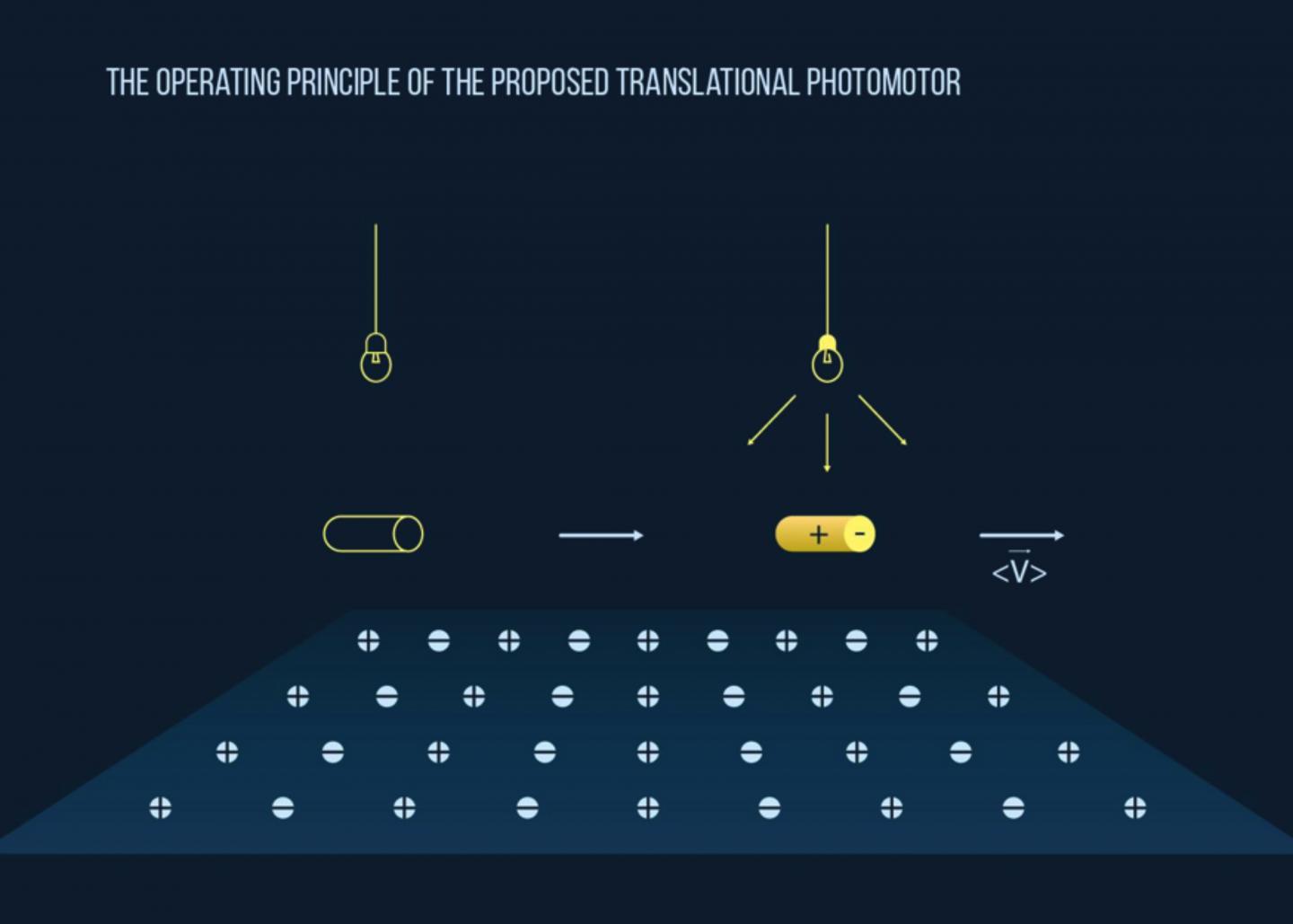 Prof. Trakhtenberg collaborated with Prof. Viktor Rozenbaum, who heads the Department of Theory of Nanostructured Systems at ISC NASU, to develop the theory of photoinduced molecular transport. This theory provides a framework for the design of nanomachines, whose motion can be controlled by a laser. The scientists have established the relationship between several model parameters (e.g., particle dimensions, photoexcitation conditions etc.) and the key performance characteristic of the device–its average velocity.

Directed nanomotors have prototypes in nature. Living organisms make use of protein devices driven by external nonequilibrium processes of a different nature, which are known as Brownian, or molecular motors. They are capable of converting random Brownian motion into directed translational motion, reciprocation, or rotation. Brownian motors are involved in muscle contraction, cell mobility (flagellar motility of bacteria), and the intra- and intercellular transport of organelles and relatively large particles of various substances (e.g., phagocytosis, or “cell eating”, and elimination of metabolic waste products from the cell). These devices operate with an amazingly high efficiency approaching 100%.

“Understanding the underlying mechanisms of the operation of naturally occurring molecular motors enables us not only to replicate them but also to design new highly efficient multifunctional artificial devices that could eventually be applied in nanorobotics. For the last several decades, researchers and engineers in various fields have been working together and making some real progress towards the development of controllable nanomachines. The results of their work were recognized as a highly relevant achievement and a significant advance in science and technology, when the 2016 Nobel Prize in Chemistry was awarded ‘for the design and synthesis of molecular machines,'” says Prof. Rozenbaum.

A Brownian motor operates by switching between at least two discrete states, which is achieved by means of chemical reactions, thermal action, AC signals, or light pulses. In the latter case, the device is referred to as a photomotor.

About ten years ago, a model was developed to describe the work of a translational dipole photomotor that operates due to photoexcitation of the molecule (particle) into a state with a dipole moment different from that in the ground state. The larger the difference between the total dipole moments of the nanoparticle in the two energy states, the higher the average velocity and efficiency of the motor.

The proposed motor is activated by a resonant laser pulse, which excites electrons in the cylinder-shaped semiconductor nanocluster causing a separation of charges and giving rise to an electrostatic interaction between the particle and the polar substrate. Subjecting the nanocylinder to periodic resonant laser pulses causes its potential energy in the field of the substrate to vary with time, which in turn enables directed motion (see diagram).

Photomotors based on inorganic nanoparticles outperform their organic molecule based counterparts in terms of efficiency and average velocity. In a cylinder-shaped semiconductor nanocluster, the value of the dipole moment before irradiation is close to zero, but photoexcitation of an electron from the bulk to the surface gives rise to an enormous dipole moment (approx. 40 D for a cylinder with a height of ca 15 Å).

“Owing to the fact that the parameters of the device have been optimized, our proposed model photomotor based on a semiconductor nanocylinder moves at a record speed of 1 mm/s, which is approximately three orders of magnitude faster than similar models based on organic molecules or motor proteins in living organisms,” the authors of the study told us.