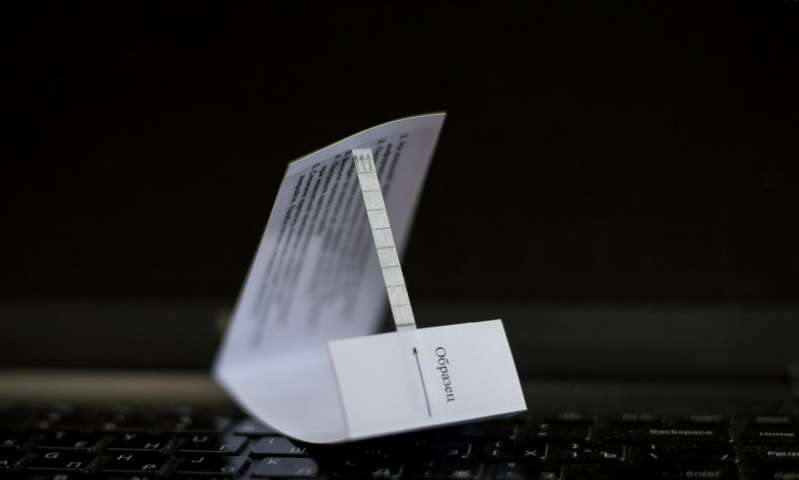 (Credit: The National University of Science and Technology MISIS)

Materials scientists from NUST MISIS, together with colleagues from the Department of Chemistry at Lomonosov Moscow State University, have developed a cheap and qualitative method of delivering blood samples and other biological fluids over any distance to be analyzed in laboratories. The developed method is similar to the technology of obtaining dry blood spots, which has already proven useful in neonatal screening. The new technology in this field has wide-ranging possibilities, and in the near future, may displace traditional methods of sample collection to become the new method of screening populations for communicable diseases (HIV, hepatitis, tuberculosis, etc.). These possibilities are now being discussed in professional environments.

“[The method] used for neonatal screening and obtaining dry blood samples involves a few blood drops are applied to special cellulose carriers and then dried in air. It requires special cards not produced in Russia, as well as expensive specialized equipment for obtaining samples of biomaterial for further analysis. And this technology doesn’t even exist in every major city. Additionally, the difficulty of using such carriers for quantitative analysis of animal and human blood is caused by irregularity of its diffusion on carriers due to the complex structure of cellulose and the presence of inconvertible adsorption of blood components, which greatly distorts the results of analysis,” says Associate Professor Alexander Osipov, one of developers of the project.

That is why at the present time, medial syringes for gathering liquid samples of blood or serum for delivery to laboratories in special containers with specific temperature conditions (often frozen) are used in medical and veterinary diagnosis. The whole process is quite expensive and inconvenient. In addition, if a violation of temperature or time conditions occurs during the delivery or storage, blood samples lose their properties, possibly leading to incorrect results.

This problem was solved by replacing the cellulose with specially prepared porous inorganic material containing nanoparticles of metals. Scientists chose the composition and form of the absorbent to ensure the blood was evenly distributed throughout the volume, and upon washing the analyzed blood components, it almost completely passed into solution.

Modified samples dry about two times faster, which critically speeds up the sample preparation process. To transport to a laboratory, the card is put in an envelope and sent by mail without need of special transport, which leads to significant financial savings. For example, in past events of an emergency epidemiological situation – like the outbreak of the Siberian plague in Yamal in 2016 – the cost of express delivery of a batch of biomaterials to a Moscow lab amounted to several million rubles.

The cost of the card itself in manual, small-scale wholesale production is five times lower than industrial imported cellulose—40 rubles vs. 180 rubles. When considering large-scale production, the price will be even lower.

Now, the creators of the new sample preparation technology have focused on veterinary diagnosis, because in animal breeding and farming, there is a need to conduct hundreds of thousands of tests, but there are no conditions for these tests on farms located in remote areas.

Now, scientists are collaborating with some of Russia`s largest poultry and animal farms, which determines the level of bird immunity, vaccinations, the presence of the FMD virus, rabies, leukemia, and other particularly dangerous infections animals may have. After the completion of testing and certification procedures, it will be possible to start the serial production of a pilot series of membrane carriers of the new model for sample selection. According to preliminary estimates, all necessary documents will be ready by the end of 2017.

The researchers are approaching Russian diagnostic laboratories for use of the new technology in medical diagnostics, including screenings for communicable diseases such as hepatitis, HIV, and others. In addition, several large companies from Southeast Asia have also expressed interest in using the new system both in veterinary and medical diagnostics.