Patients coming in with severe burns will often receive lab-grown skin grafts to begin the healing process. Unfortunately, the lab-grown skin is a less complex substitute—real skin contains three layers: epidermis, the largely waterproof outer layer; dermis, which is elastic with oil and sweat glands, hair follicles, nerve endings, and blood vessels, and the subcutaneous fat layer below that insulates and pads.

According to a study recently published in the journal Science Advances, researchers from the RIKEN Center for Developmental Biology in Japan have been able to create transplantable skin patches with all three layers from induced pluripotent stem (iPS) cells cultured from mice.

The cells were harvested from mouse gums and turned into iPS cells. Once cultured, the cells developed into embryoid bodies, a 3D mass of cells somewhat like those found in the developing embryo of a body. These were then implanted in immunodeficient mice and developed into layered, functional skin without immune cell attack. 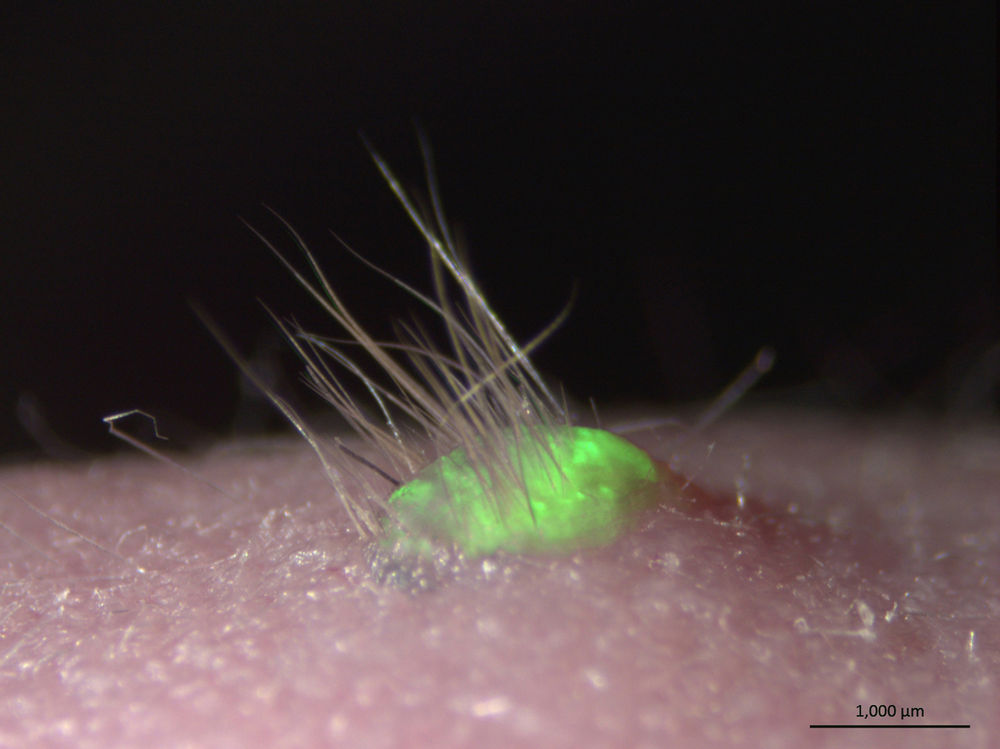 Also, because of a genetic marker it glows green to help the researchers locate the transplanted tissue. (Credit: Takashi Tsuji, RIKEN)

Once grown, some of this newly grown “skin” was then transplanted onto hairless mice. The skin did its work and took: tufts of black fur began growing, normal skin oils were secreted, and it even connected to the nearby nerve and muscle tissue.

“Up until now, artificial skin development has been hampered by the fact that the skin lacked the important organs, such as hair follicles and exocrine glands, which allow the skin to play its important role in regulation,” reported lead RIKEN researcher Takashi Tsuji in a press release. With this new technique, we have successfully grown skin that replicates the function of normal tissue. We are coming ever closer to the dream of being able to recreate actual organs in the lab for transplantation, and also believe that tissue grown through this method could be used as an alternative to animal testing of chemicals.”

The secret sauce to the whole experiment was the skin’s treatment with Wnt10b, a signaling molecule. It was because of this that the cultured skin developed more hair follicles, making it that much closer to natural skin.

Obviously it will be a while before humans can start receiving these multi-layered skin grafts. More research needs to be done with the mice, and the fact that the mice receiving the initial transplant needed to be immunodeficient for the implant to develop properly will be a hurdle to overcome. To keep the graft from rejecting in human transplants, it seems that the human would then have to be immunodeficient—the ethical issues of farming these on immune-compromised patients could present a real problem.