For decades, researchers have tried to duplicate the function of beta cells, the tiny insulin-producing entities that don’t work properly in patients with diabetes. Insulin injections provide painful and often imperfect substitutes. Transplants of normal beta cells carry the risk of rejection or side effects from immunosuppressive therapies.

Now, researchers at the University of North Carolina at Chapel Hill and North Carolina State University have devised another option: a synthetic patch filled with natural beta cells that can secrete doses of insulin to control blood sugar levels on demand with no risk of inducing hypoglycemia.

The proof-of-concept builds on an innovative technology, the “smart insulin patch,” reported last year in the Proceedings of the National Academy of Sciences. Both patches are thin polymeric squares about the size of a quarter and covered in tiny needles, like a miniature bed of nails. But whereas the former approach filled these needles with manmade bubbles of insulin, this new “smart cell patch” integrates the needles with live beta cells.

Tests of this painless patch in small animal models of type-1 diabetes demonstrated that it could quickly respond to skyrocketing blood sugar levels and significantly lower them for 10 hours at a time. The results were published in Advanced Materials.

“This study provides a potential solution for the tough problem of rejection, which has long plagued studies on pancreatic cell transplants for diabetes,” said senior author Zhen Gu, PhD, assistant professor in the joint UNC/NC State department of biomedical engineering. “Plus it demonstrates that we can build a bridge between the physiological signals within the body and these therapeutic cells outside the body to keep glucose levels under control.”

Beta cells typically reside in the pancreas, where they act as the body’s natural insulin-producing factories. In healthy people, they produce, store, and release the hormone insulin to help process sugar that builds up in the bloodstream after a meal. But in people with diabetes, these cells are either damaged or unable to produce enough insulin to keep blood sugar levels under control.

Diabetes affects more than 387 million people worldwide, and that number is expected to grow to 500 million by the year 2030. Patients with type-1 and advanced type-2 diabetes must regularly monitor their blood sugar levels and inject themselves with varying amounts of insulin, a process that is painful and imprecise. Injecting the wrong amount of medication can lead to significant complications like blindness and limb amputations, or even more disastrous consequences such as diabetic comas and death. 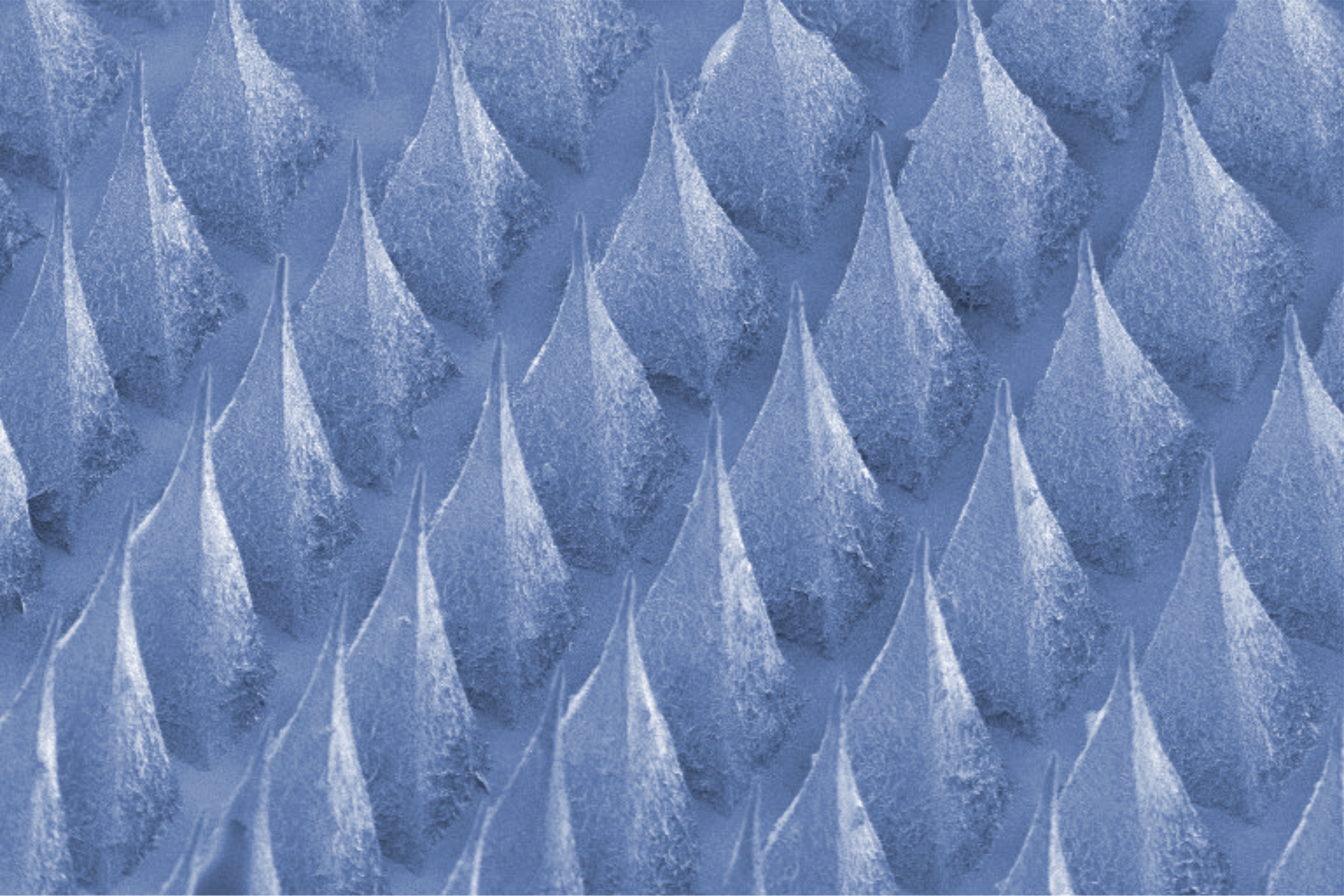 A scanning electron microscopic (SEM) image of the microneedle-array patch developed in the lab of Zhen Gu, PhD.

Since the 1970s, researchers have researched transplantation of insulin-producing cells as an alternative treatment for diabetes. The first successful transplant of human beta cells was performed in 1990, and since then hundreds of diabetic patients have undergone the procedure. Yet, only a fraction of treated patients achieved normal blood sugar levels. Most transplants are rejected, and many of the medications used to suppress the immune system wind up interfering with the activity of beta cells and insulin. More recently, researchers have been experimenting with ways to encapsulate beta cells into biocompatible polymeric cells that could be implanted in the body.

Gu, who also holds appointments in the UNC School of Medicine, the UNC Eshelman School of Pharmacy, and the UNC Diabetes Care Center, decided to create a device that would put the blood-sugar buffering properties of beta cells out of reach of the patient’s immune system. Lead author Yanqi Ye, a graduate student in Gu’s lab, constructed the “smart cell patches” using natural materials commonly found in cosmetics and diagnostics. She stuffed the hundreds of microneedles, each about the size of an eyelash, with culture media and thousands of beta cells that were encapsulated into microcapsules made from biocompatible alginate. When applied to the skin, the patch’s microneedles poked into the capillaries and blood vessels, forming a connection between the internal environment and the external cells of the patch.

Ye also created “glucose-signal amplifiers,” which are synthetic nanovesicles filled with three chemicals to make sure the beta cells could “hear” the call from rising blood sugar levels and respond accordingly.

Gu’s group showed that blood sugar levels in diabetic mice quickly declined to normal levels. To assess whether the patch could regulate blood sugar without lowering it too much, the researchers administered a second patch to the mice. As they had hoped, repeated administration of the patch did not result in excess doses of insulin, and thus did not risk hypoglycemia. Instead, the second patch extended the life of the treatment to 20 hours.

Further modifications, pre-clinical tests, and eventually clinical trials in humans will all be necessary before the patch can become a viable option for patients. But for now, the researchers believe their results provide a proof of principle for an alternative approach that could be safer and less cumbersome than current treatments.

“Managing diabetes is tough for patients because they have to think about it 24 hours a day, seven days a week, for the rest of their lives,” said co-author John Buse, MD, PhD, professor of medicine at the UNC School of Medicine and director of the UNC Diabetes Care Center and the NC Translational and Clinical Sciences Institute. “These smart insulin approaches are exciting because they hold the promise of giving patients some time off with regards to their diabetes self-care. It would not be a cure but a desperately needed vacation.”