A University of Rochester Medical Center study shows that when tumors are treated with radiotherapy, the benefits can be hijacked by the treatment’s counteraction to trigger inflammation and dampen the body’s immune response.

Published by the journal Oncotarget, the study suggests that radiotherapy (also known as radiation treatment) could be more effective if it was combined with a drug that would block a specific cell that is responsible for dulling the immune system. In mice, the research team experimented by delivering an immunotherapy two days prior to radiotherapy and saw significant benefits for many different types of cancer. 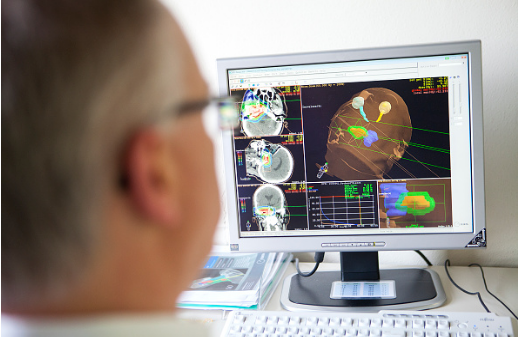 Led by Scott A. Gerber, Ph.D., assistant professor in the Department of Surgery, and graduate student Kelli A. Connolly, the research fills an important gap in knowledge. Scientists already know that radiotherapy stimulates anti-tumor cells and helps to control cancer’s growth. What is less understood is why radiotherapy cannot cure cancer.

The answer may lie with how the immune system responds to radiotherapy when a tumor is present. The URMC and Wilmot Cancer Institute scientists discovered that radiation increases the circulation of certain harmful inflammatory cells and changes the way the immune system rallies against cancer. In many patients, the circulating level of these cells (called monocytes) is already high prior to cancer treatment and sometimes indicates a poor prognosis.

Gerber believes that the abundance of these cells, which can be measured in a simple blood test, could identify patients who might benefit most from blocking them, allowing the immune system to fight the disease in combination with radiotherapy. Because these inflammatory cells express a unique protein on their surface, they are an easy target for medications, the study said. “Our observations of what happens during radiotherapy when cells are recruited to the tumor site and surrounding tissue has intriguing implications for how to improve treatment,” said Gerber, who also has an appointment in the URMC Department of Microbiology and Immunology.