Much like motors power our cars, they also ensure that proteins get to the right place in our cells, and a wide variety of diseases – from cancer to heart problems – can result when they don’t.

Now scientists have evidence of more flexibility and a little crosstalk in how motors maneuver our cells’ intricate roadway system.

Cell motors travel an extensive network of roadways that are actually part of the physical structure, or cytoskeleton, which helps give our cells strength and shape, said Dr. Graydon B. Gonsalvez, cell biologist in the Department of Cellular Biology and Anatomy at the Medical College of Georgia at Augusta University.

Microtubules and actin are the major roadways motors travel. The motors kinesin and dynein typically travel on microtubules; myosin is the motor running the actin roadway. To help make the math work with so few motors and so much cargo to move, there are adaptors that essentially help connect motor to cargo. The main adaptor for the kinesin motor is something called kinesin light chain; kinesin heavy chain is the motor part.

But in the last decade, there has been evidence that some cargos traveling the microtubule roadway just might have a different adaptor. Gonsalvez is corresponding author of a study featured on the cover of the Journal of Cell Science that provides evidence of an adaptor running these roads that previously seemed to stay on actin.

“It’s switching parties, if you will,” Gonsalvez said. “They are thought to not cross react. We found these systems have crosstalk.” 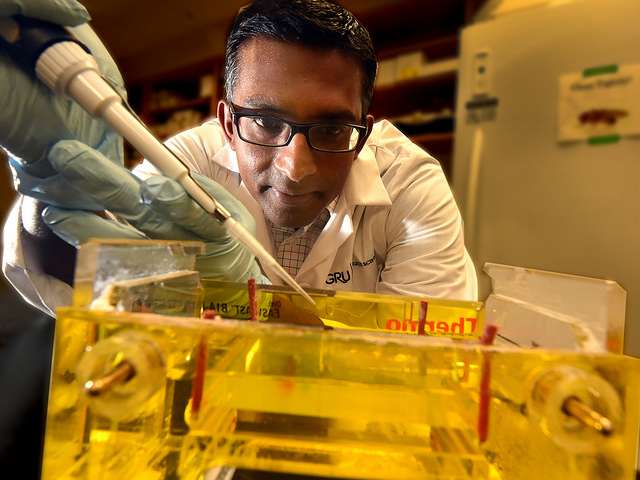 Dr. Graydon B. Gonsalvez, cell biologist in the Department of Cellular Biology and Anatomy at the Medical College of Georgia at Augusta University. (Credit: Phil Jones)

His research team used mass spectroscopy to analyze the proteins associated with the motor kinesin in the fruit fly. They looked specifically at oskar mRNA, a messenger RNA that makes proteins, which, in this case, help direct the orientation of the head and tail of a developing fruit fly embryo.

They found among the protein crowd what appeared to be an outlier, a form of tropomyosin that they would have suspected would only show up as an adaptor for the actin roadway. “Here is a different kind of tropomyosin that is binding directly to a kinesin motor and functioning as the adaptor between this kinesin motor and the cargo,” Gonsalvez said.

To double-check the apparent adaptor, they used gene-editing technology called CRISPR-Cas9 to mutate this unique form of tropomyosin, and the mRNA lost its way. When they mutated the kinesin light chain, the known adaptor, the mRNA was fine. “That told us there was something else other than the normal adaptor,” Gonsalvez said.

While the implications of the finding are not yet clear in humans, who do not have oskar mRNA, tropomyosin is associated with cardiac disease, Gonsalvez said.

The fruit fly, or Drosophila, is a great model for studying motors, because these types of mutations are easier to make than in mice, for example. Also, the flies will survive mutations so once the scientists suspected tropomyosin, they could study the result of altering it. In the case of this mRNA alteration, the flies’ progeny are the ones that will not survive. While fruit flies and humans don’t have all the same mRNA they do have the same motors.

Diffusion, or random movement like dust in the air, is not sufficient to ensure most proteins get where they need to be in a cell. And, while motors do move proteins along with other cell inhabitants, it’s more efficient to move the mRNA so the mRNA makes the protein right where it’s needed, Gonsalvez said. The movement of motors seems to increase when they have a cargo, an apparent energy-conserving approach.

In a reinforcement of the concept that location is everything, misdirected mRNA and proteins can cause damage both because they aren’t doing what’s intended and because they likely are doing additional damage wherever they end up, Gonsalvez said.

Gonsalvez likens the compartmentalization that occurs inside our cells to a house: Everything may be under the same roof, but very different things need to happen in the kitchen versus the bathroom.

Next steps include learning more about how this newly identified kinesin adaptor functions on the kinesin roadway. The research was supported by the National Institutes of Health.