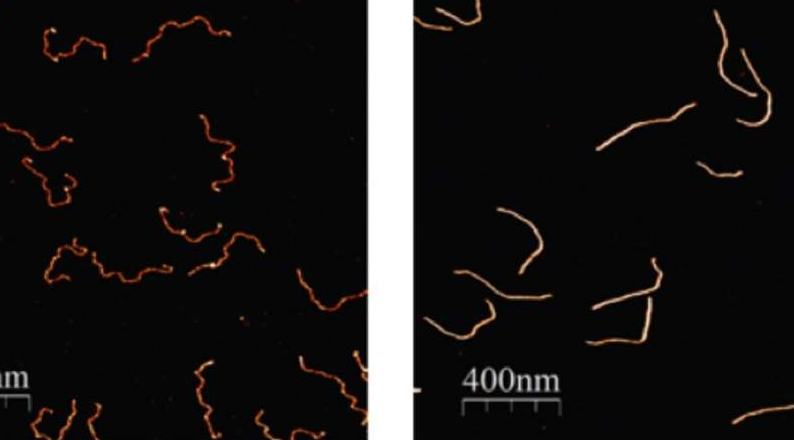 An illustration showing GC-DNA before (left) and after (right) metallization. (Credit: Moscow Institute of Physics and Technology)

A team of researchers from Russia and Israel, including scientists from MIPT, has made nanowires from DNA molecules and silver nanoparticles. The research findings were published in Advanced Materials and are featured on the cover of the journal.

As circuits and devices become smaller and more efficient, conventional electronics are approaching a technological limit. To improve and miniaturize electrical and optical devices requires nanosized components. One promising approach is opting for molecular electronics, which are based on single-molecule components. Nanowires could be used as the basic component in circuits. The structure of DNA and its capacity for self-assembly make it a very convenient molecule for manufacturing nanowires.

“If DNA molecules exhibited lasting electrical conductivity, we would soon be seeing a new generation of electronic circuits and electrical devices. However, the conductivity of DNA happens to be very low under some circumstances, especially when the molecule is deposited on a hard substrate. We found that a DNA molecule composed of guanine–cytosine pairs (GC-DNA) can interact with silver nanoparticles by ‘capturing’ the atoms of the metal. As silver atoms are introduced into the DNA, the molecule undergoes metallization,” says Dmitry Klinov, the head of the Laboratory of Medical Nanotechnologies at the Federal Research and Clinical Center of Physico-Chemical Medicine and a professor at the Department of Molecular and Translational Medicine at MIPT.

(1) A silver nanoparticle interacts with a DNA molecule. (2) The metal particle breaks up into smaller structures called nanoclusters. (3) Silver nanoclusters are distributed evenly along the double helix due to diffusion. (Credit: Moscow Institute of Physics and Technology)

The intriguing properties of DNA are not limited to the ability to store genetic information. It is one of the prime candidates for nanoconductors to be used in molecular electronics. The authors of the study revealed a number of peculiar features of DNA in their earlier research. Firstly, it exhibits superconducting properties when placed between two superconductors (a phenomenon known as proximity-induced superconductivity). Secondly, the DNA molecules can effect charge transport, but their conductivity varies depending on the substrate they are deposited on. Charge transport can be facilitated by introducing metal atoms along the double strand, although it is difficult to achieve their even distribution along the entire length of the molecule. As a result, metallization does not occur in some regions of the molecule, which impairs its overall electrical conductivity. The authors of the study found that GC-DNA, which is made of a guanine strand and a complementary cytosine strand, can be treated with silver nanoparticles to yield a uniformly metallized structure.

Metallization is a relatively simple process that involves adding GC-DNA to a solution of silver nanoparticles coated with oligonucleotides and incubating it for two to three days. The particles interact with DNA by donating their atoms (see diagram), and eventually the whole molecule is uniformly metallized. The scientists refer to the resulting DNA-based molecule as E-DNA (the letter E stands for “electrical”). E-DNA is more rigid and more resistant to mechanical deformation than the canonical double stranded DNA (dsDNA). It is also not digested by the enzymes specific to the parent molecule. As demonstrated by atomic force microscopy, the E-DNA molecule has an increased height (1.1 nm), as compared to the parent dsDNA (0.7 nm).

“Since metal atoms are distributed evenly along the DNA molecule, we expect the nanowire to be a good conductor,” explains Dmitry Klinov.

The team plans to conduct further research into the properties of E-DNA and metallization mechanisms.