Cedars-Sinai Heart Institute investigators have learned how cardiac muscle cells react to a certain type of injury that can be caused by open-heart surgery. The findings point to a new potential way to help these hearts recover more completely.

The cells, known as cardiomyocytes, can be damaged by the process of stopping and starting the heart during surgeries that use cardiopulmonary bypass machines to take over the heart’s functions. Hundreds of thousands of these operations are performed each year in the U.S. to replace failing hearts, bypass clogged arteries, fix leaky valves, and more.

While most patients recover easily enough, some patients suffer long-term effects or even fatal heart failure from the stresses of the surgery.

In their study, published in the JCI Insight journal of the American Society for Clinical Investigation, the investigators scrutinized cardiac muscle cells in tissue samples taken from patients before and after open-heart surgeries. Their work demonstrates for the first time in human hearts that cardiac muscle cells react to this type of injury by both destroying and creating new mitochondria, the tiny energy factories inside each cell.

“By accelerating beneficial aspects of this process, doctors one day may be able to speed up healing from open-heart surgery,” says Roberta Gottlieb, MD, director of Molecular Cardiobiology and professor of Medicine at the Cedars-Sinai Heart Institute. She was the principal investigator of the study. 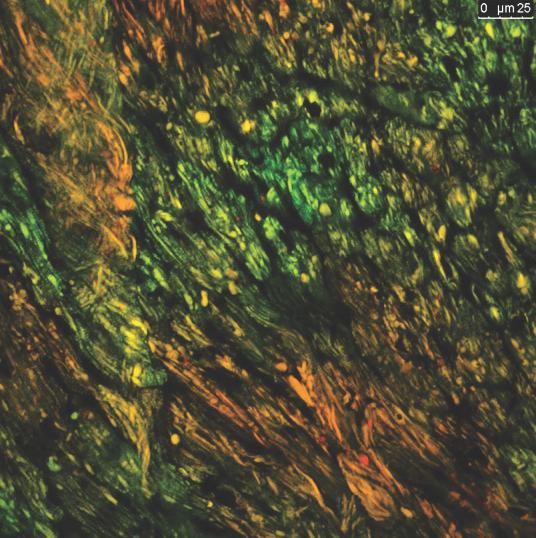 This fluorescent image displays different levels of mitochondrial activity, in red and green, in a mouse heart. (Image credit: Cedars-Sinai)

Currently, physicians try to protect the cardiac muscle during open-heart surgery by cooling it and infusing it with potassium to stop its contractions. The goal is to reduce the trauma produced by the one-two punch of first depriving the heart of blood (ischemia) and then flooding it with blood (reperfusion).

“Despite these measures, ischemia/reperfusion injury remains a major cause of complications after heart surgery,” says Allen Andres, PhD, a research scientist in Gottlieb’s laboratory and assistant professor of Medicine. He was the first author of the study, working with Robert Mentzer, MD, professor of Medicine, who initiated and designed the study.

Investigators for decades have tried to develop drugs to treat ischemia/reperfusion injury associated with cardiac surgeries, with little success, according to Gottlieb. “There have been wonderful results in animal tests, but not in people,” she says. “We need to have a better understanding of the beneficial and deleterious processes that characterize the human heart’s response to ischemia and reperfusion.”

Prior to beginning the study, the Cedars-Sinai investigative team had expected to find that cardiac muscle cells would dismantle some of the mitochondria after ischemia/reperfusion injury. This process was known to occur in the hearts of laboratory animals. Cells and cell structures in various parts of the body often self-destruct after their genetic material gets damaged by stress or other events.

The investigators were gratified to confirm that self-destruction of mitochondria occurred in the human heart too. But they were surprised to learn that human cardiac muscle cells also assembled new mitochondria in response to ischemia/reperfusion injury. “We don’t know if this mitochondrial production is good or bad news for the heart,” Gottlieb says. “These could be better mitochondria or carry genetic defects. We intend to find out.”

To learn more, the investigators are developing proposals to collect data on mitochondria from heart transplant patients over a period of months. And they are already investigating a pharmacological agent that shows promise in stimulating mitochondrial creation in animal models.