People with scoliosis, a twisting of the spine that can occur as a birth defect or more commonly starts during the teen years, are now closer to a genetic explanation for their condition.  An overactive gene, called ladybird homeobox 1 (LBX1), is the start of a genetic chain reaction that causes the spine to grow abnormally.  The report from collaborations at Hiroshima University, Kyoto University, RIKEN, and Kanazawa University is the first to demonstrate the functional association of scoliosis with LBX1.

“A genetic test called the ScoliScore AIS Prognostic Test already exists for adolescents recently diagnosed with scoliosis to predict if the curve of the spine will get worse, which can guide treatment decisions.  Studies like ours that identify genes important in causing scoliosis can help further develop this current prognostic test into a clinically predictive genetic test to identify scoliosis before symptoms occur,” said Chisa Shukunami, DDS, PhD, Professor in the Department of Molecular Biology and Biochemistry at Hiroshima University.

Scoliosis is a polygenetic disease – mutations in multiple genes are responsible and environmental factors may also be relevant.  The scientific community already knows one set of molecules, called the Wnt/PCP signaling pathway, is partially responsible for twisting the spine in scoliosis.  These new results reveal how the Wnt/PCP pathway becomes problematic and provide insights for restoring normalcy.

Too little activity of the LBX1 gene has no effect on development. However, the research team suspected that too much LBX1 activity might be problematic.  The scientists performed genetic experiments using zebrafish, a small freshwater fish common in research labs, to model scoliosis.

Researchers genetically manipulated zebrafish so they had too much LBX1 and then observed how their spines grew.  The timing of when too much LBX1 started was important for how the fish’s bodies developed.

During embryonic development, groups of cells form a pattern of mirror images on either side of the body and eventually become many different parts of the spine. In embryos injected with extra LBX1, the cells responsible for becoming the backbone and back muscles were wider than in healthy fish.  Fish that survived long enough developed misshapen bones in their backs, which caused their scoliosis.  Scoliosis in humans is not fatal, but researchers believe this model represents the birth defect version of scoliosis in humans because the bones are obviously misshapen. 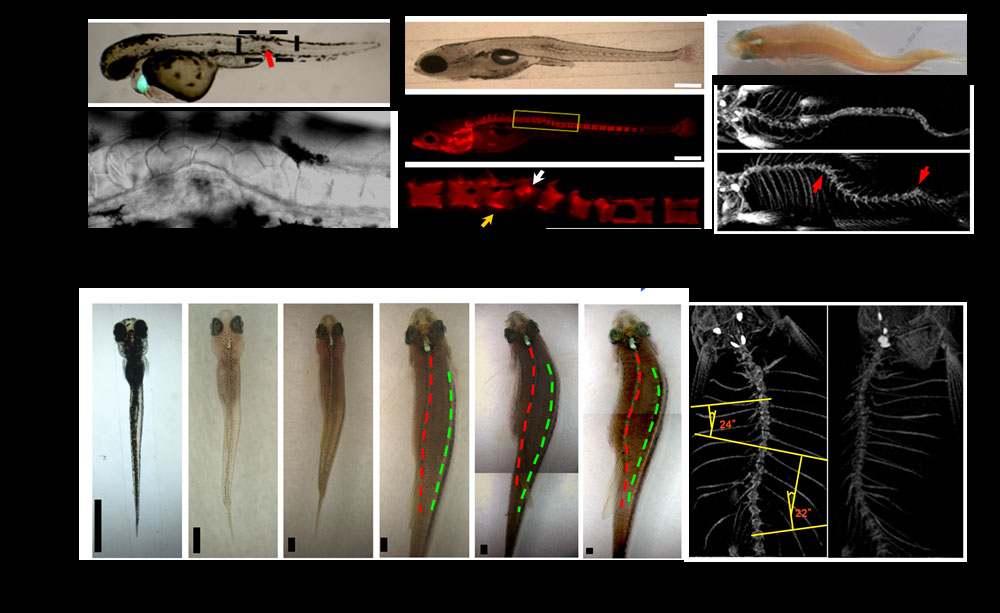 Adolescent zebrafish exhibits scoliosis – Images of the same fish as it grew from six to 90 days old. The red dotted line traces the curve in the fish’s spine as it developed symptoms representing adolescent scoliosis in humans. Black bars in the bottom left of each image are equivalent to 1mm. Images for ages 70 and 90 days are combined from two different exposures. Photo by Long Guo (Kyoto University) and Hiroshi Yamashita (Hiroshima University).

Another group of zebrafish were genetically modified to express extra LBX1 throughout their entire lives, but only in some cells, making them what researchers call genetic mosaics.  Some of these fish developed bones with the correct shape, but their spines still grew curved as they entered adulthood.  This model is typical of the majority of human scoliosis cases, where there are no signs of problems until growth spurts just before or during adolescence.  Adolescent idiopathic scoliosis affects 2-4% of all children aged 10 to 16.

Adolescent-onset scoliosis in humans is more common in girls.  Interestingly, researchers noticed more of their female fish developed scoliosis than their male fish.  The reasons for why females are more susceptible remains a mystery, but it does further support the strength of the using this zebrafish model to study the genetic causes of scoliosis.

A piece of DNA that regulates LBX1 is mutated, so LBX1 is hyperactive.  Excess LBX1 prevents the activity of the wnt5b promoter.  An inactive promoter means the gene wnt5b is less active.  Insufficient wnt5b means the gene RhoA is not active.  This cascade or signaling pathway is the link between LBX1 and scoliosis.

The Wnt/PCP cell signaling pathway is well mapped and already implicated in causing scoliosis, but no one had yet connected LBX1 to Wnt/PCP.  The team of researchers designed additional experiments to see how the genes might interact.

The wnt5b gene helps control multiple aspects of cell growth, including regulating how cells become bones and muscles early in development.  The spine is an interconnected complex of bones, nerves, and muscles whose formation and growth depends on a series of elaborate genetic regulations.  Improper control of wnt5b could partially explain the skeletal irregularities that cause scoliosis.

Researchers decided to test if artificially replacing wnt5b or RhoA could prevent scoliosis and death in fish modeling the congenital version of scoliosis.  When the wnt5b or RhoA was added very early in embryonic development, the fish had significantly less severe scoliosis, but the other associated deformities were still fatal.  It is unlikely that this method will prevent or correct adolescent scoliosis because of how early the wnt5b or RhoA needed to be provided to have an effect on straightening the spine.

“Greater understanding of the genetic mechanisms that lead to adolescent-onset scoliosis is necessary before any genetic interventions for clinical treatments can be designed,” said Prof. Shukunami.