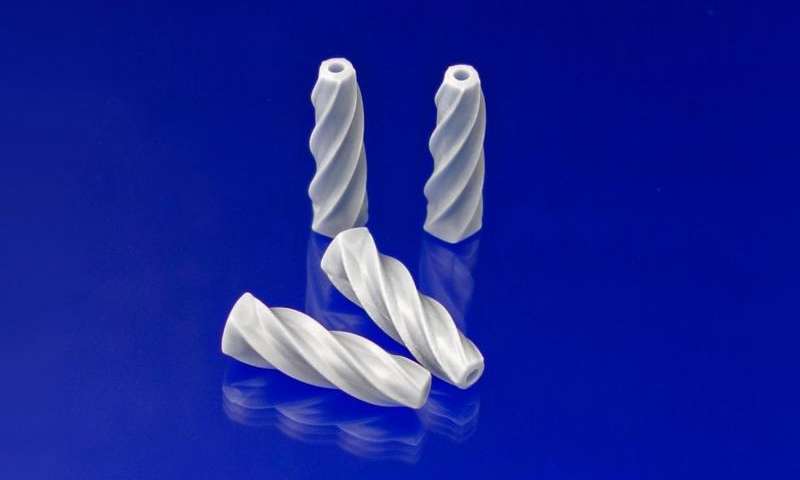 Bioceramic screw nails with a specially shaped thread can be introduced into bone with just a few rotations. (Credit: Fraunhofer IFAM).

Complex bone fractures are often set with titanium or steel screws and plates. However, if these remain in the body for some time, they can cause health problems. A new bioceramic screw nail has the capacity of replacing the currently used metal components. It can be easily introduced into bone and does not have to be removed. Fraunhofer researchers are presenting the screw nail from November 14-17 at the MEDICA trade fair in Düsseldorf (Hall 10, Booth G05).

The beginning of the ski season is always a hectic period for alpine emergency wards. After treatment, some patients end up with metal components in their bodies, as complex bone fractures are usually set with titanium or steel screws and plates. These must be surgically removed later, at considerable expense and discomfort to the patient. If the screws remain in the body, they can trigger inflammation or allergies in sensitive patients. However, these complaints could soon become history, as researchers from the Fraunhofer Institute for Manufacturing Technology and Advanced Materials IFAM have partnered with the university hospitals of Giessen-Marburg and Bonn and the University of Bremen to develop a bioceramic implant screw nail. The new biomedical component, dubbed a “scrail,” is made of calcium phosphate, which greatly resembles the composition of bone material.

Reduced risk of injury to tendons and bones

The project was supported by the German Federal Ministry for Education and Research with a million-euro grant. According to Dr. Sebastian Hein from Fraunhofer IFAM, important project tasks included designing the screw nail according to ceramic requirements and hardening it. In contrast to previous medical screws made from titanium or polymer, the new screw nail will not be screwed into the bone, but rather carefully hammered in. For this reason, researchers have developed a specially shaped thread for the screw nail that allows it to be implemented with a minimum of rotations and reduces the risk of damage to tendons and bones.

In contrast to metal components, the ceramic screw nail integrates into the bone and does not have to be removed, since the two most used bioceramic materials – calcium phosphate and hydroxyapatite – are very similar to bone material. This is a distinct advantage over polymer screws, which disintegrate in the body. Degradation products from polymer screws can cause inflammation. Additionally, after the disintegration of the screws, cavities can form in bones, rendering them unstable and more prone to breaking. Ceramic-based screw nails do not disintegrate, but instead bond with the bone. Ideally, they can even accelerate bone growth, says Hein.

The greatest challenge for the development team at Fraunhofer IFAM and Bremen University was attaining the maximum strength of the material, since ceramics are fairly breakable. With the help of injection molding technology, researchers pour hydroxyapatite powder into screw nail molds and heat them. Using the right process para-meters delivers components with optimized stability. The procedure is particularly suited to mass production, as it is inexpensive and allows for flexible mold design. However, hydroxyapatite powder can also be used in conjunction with 3-D printers, thus enabling the production of patient-specific implants.

Hein anticipates that the screw nail will soon be ready to use in operations, as calcium phosphate has already been tested for biocompatibility and has been in use as a material in medical applications for several years. Furthermore, medical tests in sheep have shown that the screw nail could be inserted much more quickly and precisely than standard screws, which was “an effect totally unexpected from our side,” says Hein. As a result, the operation time is shortened and the patient is under anesthetic for less time.