Take two tablets and a selfie? Your doctor’s orders may one day include a smartphone video to make sure you took your medicine.

Smartphone apps that monitor pill-taking are now available, and researchers are testing how well they work when medication matters. Experts praise the efficiency, but some say the technology raises privacy and data security concerns.

Selfie medicine works like this: Open an app on your phone, show your pills, put them in your mouth and swallow. Don’t forget to show your empty mouth to the camera to prove today’s dose is on its way. Then upload the video proof to the clinic.

Fans say the technology addresses a big problem: About half of drugs for chronic conditions aren’t taken as prescribed because of cost, side effects or patient forgetfulness.

With treatment for opioid addiction, a skipped dose can mean a dangerous relapse. The National Institute on Drug Abuse is funding research to tailor a smartphone app for those patients and see if they’ll use it.

“If we can keep patients engaged, we can keep them in treatment longer,” said lead researcher Dr. Judith Tsui of the University of Washington School of Medicine in Seattle.

The next phase of her research will compare a group of patients who use the monitoring app called emocha with those who don’t to see if there’s a difference. 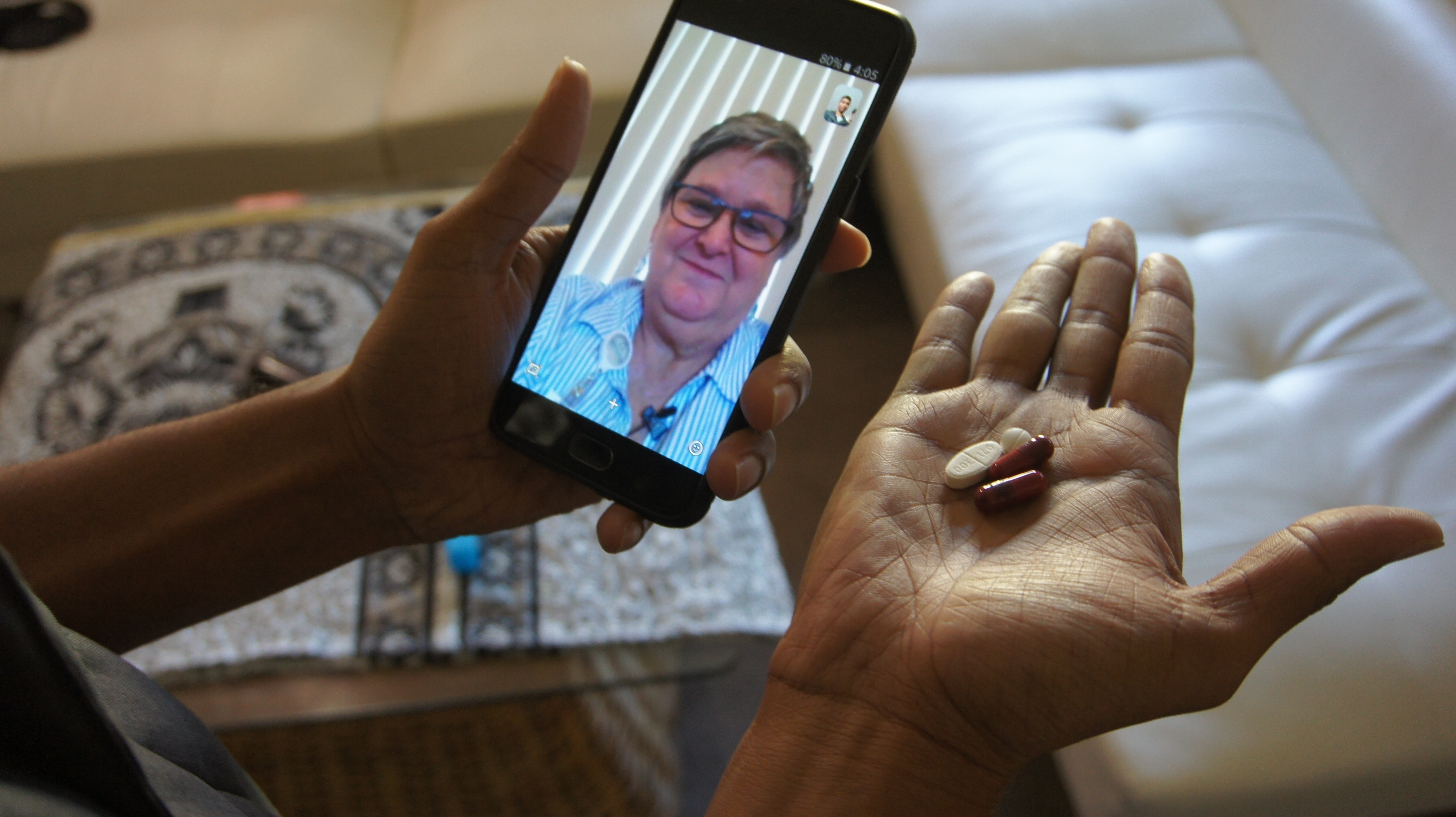 At one Tennessee treatment center, some patients with opioid addiction are already using the app to upload selfies of their daily dose and answer questions about how they’re doing.

“Every time they sign on, it allows us to capture data. Are they having cravings? Suicidal tendencies?” said Scott Olson, CEO of Dallas-based Pathway Healthcare, which is trying the app at its Jackson, Tennessee, site. “Maybe a phone call from a counselor might make the difference between staying clean and a relapse.”

Olson thinks insurers will pay for the service with more evidence. For monitoring tuberculosis patients, health departments pay roughly $35 to $50 per patient each month for systems that include encrypted data storage. A small health department might pay as little as $500 a month.

The idea of watching someone take their medicine — called directly observed therapy or DOT — has roots in tuberculosis where one person’s forgetfulness can be serious for everyone. If patients don’t take all their antibiotics, their infectious TB germs can get stronger, developing drug resistance and endangering the broader community.

But taking a handful of pills daily for up to a year is difficult, so public health departments traditionally sent workers to people’s homes and workplaces to watch them take their doses. Today, many TB patients prefer remote monitoring. Nurses like it too.

“We can accomplish in a two-minute phone call something that might have taken an hour to do and most of that hour was in the car,” said Cooley, who works for the Tacoma-Pierce County Health Department in Washington state.

The new uploaded selfies don’t need an appointment. They are a daily routine for many tuberculosis patients in Seattle, San Francisco, Los Angeles and Houston, where savings on mileage and worker time amounted to $100,000 in a recent year.

In Boston, Albuquerque and five other cities, researchers are studying whether the technology works for hepatitis C, a blood-borne virus that’s surging among a new generation of injection drug users. New drugs for hepatitis C can cure, but they’re expensive — $75,000 for a 12-week course of treatment — so insurers want to make sure patients take them.

“I think it holds a lot of promise,” said researcher Dr. Alain Litwin of University of South Carolina School of Medicine, who’s testing whether patients do better when someone watches them take their pills.

What’s next? An insurer in Maryland plans to use the technology in diabetes and high blood pressure to make sure Medicare and Medicaid patients take their medicine. Startups selling the apps say they could be used by faraway adult children monitoring an elderly parent’s daily pill-taking.

“That’s the biggest ick factor,” said Carolyn Neuhaus, a medical ethicist at the Hastings Center in New York. “You can imagine a program where benefits are tied to compliance and the insurer says, ‘We won’t pay for medication anymore unless you’re taking it correctly.'”

Globally, the rapid spread of smartphones creates an opportunity to eradicate TB, say the app developers.

But eliminating TB may take simpler, cheaper technologies that can be scaled for millions of cases, said Dr. Daniel Chin, who leads TB efforts for the Bill and Melinda Gates Foundation.

The group supports research in China and India on two homegrown technologies. China’s tool, about the size of a child’s shoebox, reminds patients to take their pills and saves data for review. In India, the government favors a blister pill pack printed with phone numbers; a patient punches out a daily pill, then calls the revealed number.

Worldwide, TB kills more than 1.6 million people annually, even though most deaths are preventable with treatment.

“If we are going to eliminate the disease, we need technology,” said Dr. Richard Garfein of the University of California, San Diego School of Medicine, who helped develop one of the smartphone apps, SureAdhere.