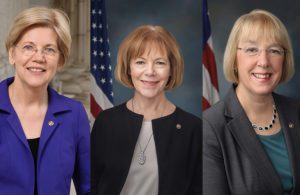 “We support FDA’s efforts to update the medical device review regime to better accommodate digital health devices and believe that it is an important step in ensuring that America remains an innovative, cutting-edge producer of medical devices. However, it is essential that changes to FDA’s regulatory framework are done in compliance with the current statutory framework and do not compromise public safety.” Sens. Elizabeth Warren (D-Mass.), Tina Smith (D-Minn.) and Patty Murray (D-Wash.) wrote in a letter dated Oct. 10 to FDA Commissioner Scott Gottlieb.

Their letter requests a response from Gottlieb by Nov. 9. FDA plans to respond directly to the senators, said agency spokesperson Stephanie Caccomo.

“The agency is working with various stakeholders to design the pre-cert pilot while we explore executing the pilot within the agency’s existing statutory authority,” Caccomo said. “We have been transparent about our proposed working model for the program, including seeking public feedback.”

Announced last year, the pre-cert pilot program includes such industry giants as Apple, Johnson & Johnson, Samsung and Google’s life sciences sister company Verily. The idea is that FDA precertifies the companies based on their software design, validation and maintenance. The companies are then able to release medical-related software technology without having to seek pre-market approval for the software as a medical device, though they also commit to collecting post-market and real-world evidence data to substantiate further versions of the product.

The program moves from a “product-by-product base towards a company base, to start relying on a company’s culture of quality and organizational excellence” and leverage that credit to streamline FDA’s process, Bakul Patel, FDA’s associate center director for digital health, explained to Medical Design & Outsourcing early this year.

Brian Johnson, president of the medical device trade association MassMEDIC, describes the program as a “way for the FDA to appropriately respond to the regulatory demands of the rapidly growing field of digital health and digital medicine.”

“We supported the program when it was released and believe this regulatory approach to a rapidly changing healthcare environment is appropriate and helpful for the overwhelming number of digital health companies being formed in the Commonwealth and beyond. Digital health and digital medicine are a critical sector of our healthcare ecosystem and a key cog in bringing healthcare to all,” Johnson said on behalf of the group. (Note: Johnson stepped down as publisher of MassDevice and Medical Design & Outsourcing earlier this year.)

The three Democratic senators, however, want to know what present laws FDA is basing the program on. Their letter to Gottlieb outlines dozens of questions involving not only the statutes that FDA is basing the program on but also how the agency is determining that a company is truly demonstrating excellence in its software, the potential use of third parties to provide precertification, how data from the companies will be shared and who gets to see it, and much more.

“The agency should be focused on ensuring it has the tools and capacity to guarantee that software products that perform medical device functions are safe and effective and to hold companies that skirt the rules accountable,” the senators said in their letter.

Caccomo, the FDA spokesperson, said the pre-cert pilot is generally about exploring ways to streamline FDA oversight of digital health products so that people can have access to safe and effective technologies to improve their health. FDA’s plan is to publish the program’s next iteration in December and to solicit more public feedback as the agency continues developing the pre-cert pilot throughout 2019.

In another post on Aug. 16, 2017, on Health Affairs, Nathan G. Cortez, Nicolas Terry, and I. Glenn Cohen described the pre-cert program as “an experiment in medical product regulation” that lacks any statutory backing, even with passage of the 21st Century Cures Act, which FDA commissioner Scott Gottlieb has cited as an authorizing text. They seemed to be asking how the FDA will execute the plan without the legislative support of the 21st Century Cures Act, which doesn’t specifically call for the precertification program? (The authors note the plan “will likely be implemented through nonbinding guidance.”)

Heather Thompson contributed to this story.