Fujitsu Laboratories Ltd. Today (18 April) announced that it has developed a portable breath sensor that can extract and quickly measure the concentration of only specified gas components, such as ammonia, that are included at low concentrations in people’s breath and are suggested to be correlated with lifestyle diseases. This sensor makes it easy to identify molecules that previously could only be identified using large analysis instruments.

Focusing on the correlation thought to exist between ammonia and liver metabolism as well as well as between ammonia and Helicobacter pylori (H. pylori) infection, which is a risk factor for stomach cancer, Fujitsu Laboratories applied the ammonia-adsorbing characteristic of copper(I) bromide films to successfully develop a sensor device that measures tiny amounts of ammonia in a person’s breath at a sensitivity differential that is roughly 2,500 times that for other gases.

In addition, by applying this technology, Fujitsu Laboratories became the first in the world1 to succeed in an experiment that selectively detected nonanal2, which is a candidate biomarker for lung cancer.

Fujitsu Laboratories will seek to increase the types of gases it can measure in order to create a sensor device that is as easy to use as a thermometer in screening3 for people who should undergo more detailed examinations for the early detection of lifestyle diseases.

The details of this technology will be presented at the 11th Annual IEEE International Conference on Nano/Micro Engineered and Molecular Systems (IEEE-NEMS 2016), which will be held in Matsushima Town in Japan’s Miyagi Prefecture on April 17.

Conceptual image of component gases in a person’s breath

Background
For the early detection of lifestyle diseases, such as high blood pressure, diabetes, and cancer, research is being conducted on diagnostic methods using breath analysis to examine the gas components of a person’s breath as an indicator of the condition of the person’s body.

A person’s breath includes tiny concentrations of gases that are closely associated with bodily functions and disease. Chemical substances in the blood evaporate in the lungs and are exhaled. For example, ammonia in a person’s breath is said to be correlated both with liver metabolism and H. pylori infection, which is a risk factor for stomach cancer. In addition, nonanal is a candidate biomarker for lung cancer.

By using breath analysis to measure the concentrations of these gases, the objective is to detect specified substances that are effective in the early detection of lifestyle diseases, leading to improved lifestyle habits. This will also be less invasive than other methods that involve, for example, physical constraints or the collection of blood samples.

Issues
In a person’s breath, there is a mixture of gases with similar chemical characteristics. Currently, there are generally two methods of analyzing breath components.

The first is using large analysis instruments, typically gas chromatography, to measure certain target gases. This can perform a detailed analysis of gas components, but the equipment is bulky and expensive, requires a trained operator, and takes several hours to produce results, making it an unsuitable choice for quick and easy analysis.

The second is using an “electronic nose” that contains numerous gas sensors to analyze the differences in the response patterns between the breaths of different people. This produces results quickly, and it is portable, making it easy to use, but this method has trouble distinguishing between a target gas and other gases, meaning its performance is not sufficient for breath analysis as an indicator of bodily health.

About the Technology
Key features of the technology are as follows.

1. A sensor that sensitively measures only ammonia

Copper ions in copper(I) bromide, a P-type semiconductor4, undergo a reversible adsorption with ammonia molecules. Making use of this property, Fujitsu Laboratories developed a sensor in which the film thickness and copper(I) bromide composition were optimized for use as a breath sensor. Because electron supply from the ammonia reduces the carriers in the film, this has the effect of increasing electrical resistance between electrodes. This phenomenon was used and the reactions quantified. As a result, with a sensitivity differential of 2,500 times that for acetone, another gas commonly found in the breath, the sensor was able to distinguish and measure just ammonia from a level of 10 parts per billion (ppb). 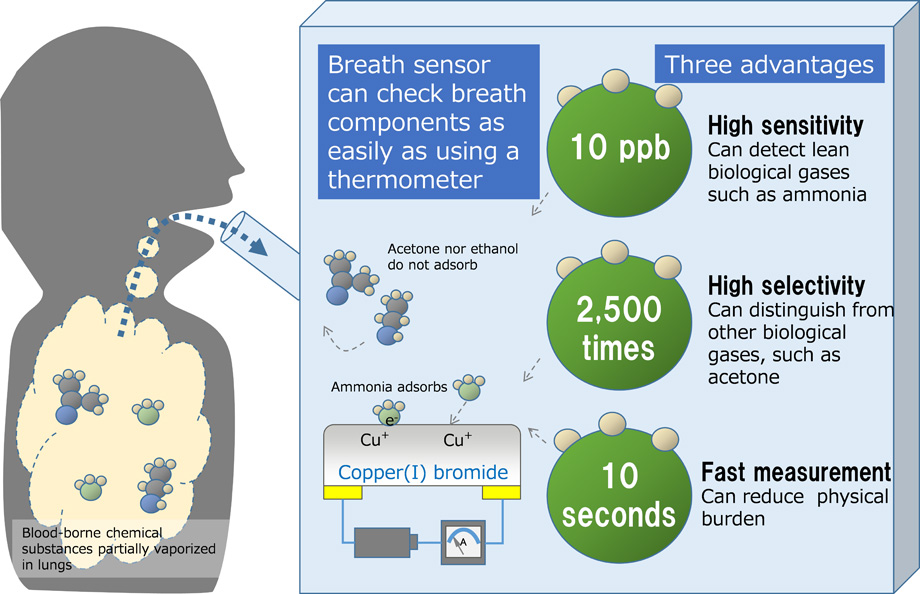 Operation principles and advantages of the newly developed breath sensor

Results
Fujitsu Laboratories built a prototype portable breath-gas sensor with this technology and demonstrated it on 128 of the company’s employees. Compared to existing compact gas sensors, this was found to have about 100 times the selection ratio for differentiating between biological gases. This means that, with a person whose breath contains 2,000 ppb of acetone, for example, this sensor would limit the error induced by the acetone in ammonia concentration readings to less than 1 ppb, and achieves the level of analytical capability in ammonia measurement needed for disease detection, which is 100 ppb.

Using the same technology, by forming a thin layer of tertiary amine molecules on the surface of the copper(I) bromide, Fujitsu Laboratories was able to produce the world’s first electronic device capable of detecting nonanal at concentrations of 200 ppb.

This technology makes it possible to avoid the unpleasantness of drawing blood while at the same time making it easier to study the effects of changes in breath components resulting from lifestyle habits, on an ongoing basis.

Future Plans
Fujitsu Laboratories plans to continue developing this technology to increase the variety of gases it can detect, to be able to incorporate sensors into smart devices and wearable devices, and to make breath component gas analysis as easy to use as a thermometer.

Also, in order to make this technology a useful method of screening for early detection of lifestyle diseases, Fujitsu Laboratories aims to conduct joint research with medical institutions to test the biological and medical results of breath analysis. The company hopes to create a technology that can examine breath components before a person needs to be admitted to a hospital and that is as easy to use as a thermometer, with the goal of a practical implementation in 2018.

References
1World’s first successful tests: Using electronic devices, as of March 2016, per Fujitsu Laboratories’ research.
2Nonanal: An aldehyde compound with the chemical formula C9H18O. One of the components of citrus aromas.
3Screening: A medical technique for identifying potentially ill people in a group that also contains healthy people. The process is used to determine who needs detailed examinations at the hospital.
4P-type semiconductor: A type of semiconductor in which positively charged electron holes are used as carriers.