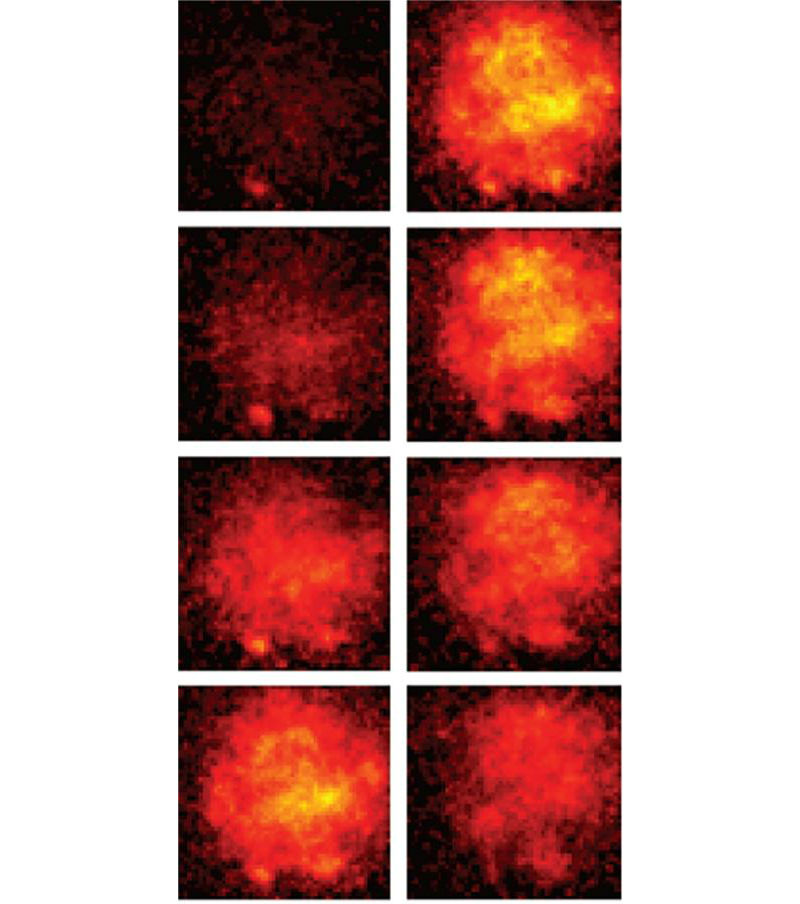 A series of images from a Duke engineering experiment show voltage spreading through a fruitfly neuron over a matter of just 4 milliseconds, a hundred times faster than the blink of an eye. The technology can see impulses as fleeting as 0.2 millisecond — 2000 times faster than a blink. (Credit: Yiyang Gong, Duke University)

Researchers at Duke and Stanford Universities have devised a way to watch the details of neurons at work, pretty much in real time.

Every second of every day, the 100 billion neurons in your brain are capable of firing off a burst of electricity called an action potential up to 100 times per second. For neurologists trying to study how this overwhelming amount of activity across an entire brain translates into specific thoughts and behaviors, they need a faster way to watch.

Existing techniques for monitoring neurons are too slow or too tightly focused to generate a holistic view. But in a new study, researchers reveal a technique for watching the brain’s neurons in action with a time resolution of about 0.2 milliseconds — a speed just fast enough to capture the action potentials in mammalian brains.

The paper appeared early online in Science on November 19, 2015.

“We set out to combine a protein that can quickly sense neural voltage potentials with another protein that can amplify its signal output,” said Yiyang Gong, assistant professor of biomedical engineering at Duke and first author on the paper. “The resulting increase in sensor speed matches what is needed to read out electrical spikes in the brains of live animals.”

Gong did the work as a postdoctoral fellow in the laboratory of Mark Schnitzer, associate professor of biological sciences and applied physics at Stanford, and an investigator of the Howard Hughes Medical Institute. Gong and his colleagues sought out a voltage sensor fast enough to keep up with neurons. After several trials, the group landed on one found in algae, and engineered a version that is both sensitive to voltage activity and responds to the activity very quickly.

The amount of light it puts out, however, wasn’t bright enough to be useful in experiments. It needed an amplifier.

To meet this engineering challenge, Gong fused the newly engineered voltage sensor to the brightest fluorescing protein available at the time. He linked the two close enough to interact optically without slowing the system down.

“When the voltage sensing component we engineered detects a voltage potential, it absorbs more light,” explained Gong. “And by absorbing more of the bright fluorescent protein’s light, the overall fluorescence of the system dims in response to a neuron firing.”

The new sensor was delivered to the brains of mice using a virus and incorporated into fruit flies through genetic modification. In both cases, the researchers were able to express the protein in selected neurons and observe voltage activity. They were also able to read voltage movements in different sub-compartments of individual neurons, which is very difficult to do with other techniques.

“Being able to read voltage spikes directly from the brain and also see their specific timing is very helpful in determining how brain activity drives animal behavior,” said Gong. “Our hope is that the community will explore those types of questions in more detail using this particular sensor. Already I’ve received multiple emails from groups interested in trying the technique in their own labs.”